Functional and wearable collections were mixed with a few more experimental lines. 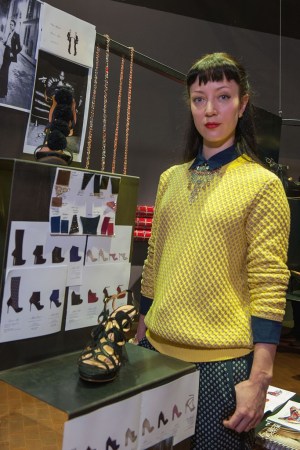 FLORENCE — Functional and wearable collections were mixed with a few more experimental lines at the 11th edition of this month’s four-day women’s clothing and accessories trade show Pitti W.

“Considering that the trade show kicks off the buying season, I really like the fact that Pitti W is now more focused on easy, smart capsules and small brands rather than on bigger, more-expensive collections,” said Roberta Valentini, owner of Italian luxury boutique Penelope. Valentini, who expressed caution in her buying strategy in light of Italy’s difficult market, also praised organizer Pitti Immagine’s efforts to promote the fair with efficient communication and to organize the exhibition spaces putting the focus on trends.

The strategy appears to have paid off. According to Pitti Immagine, almost 5,000 visitors attended the fair at the Dogana location, a former customs house. This represents an increase in attendance of about 25 percent compared with January 2012.

At Pitti W, Milanese company Giuliano Fujiwara, which was acquired by the Taiwanese Breeze Group in 2011, introduced its “New Vintage” clothing capsule.

The brand’s creative team revisited the first collection designed by Yoshiaki Fujiwara, who founded the fashion brand in 1986, for both women’s and men’s pieces featuring the house’s signature minimal look.
The capsule, which consists of 17 wool and cashmere gabardine pieces in black, gray and blue, includes a jumpsuit, an oversize bomber jacket and a fitted long coat for women, while the men’s range features a fitted suit, along with more sporty pieces.

A selection of knitted sweaters, their sleeves embellished with the collection’s signature double stripes, completed the offering. According to Fujiwara chief executive officer Stefano Sacchi, “New Vintage,” has wholesale prices ranging from 70 euros, or $93 at current exchange, for knitwear to 200 euros ($266) for coats, and is especially aimed at Asian markets.

Hyun Yeu, creative director for Ado Les Scents, said showing at Pitti W exposed the brand to international buyers. The designer, a native of Korea and based in Amsterdam, showed a unisex collection with a strong focus on tailoring.

“The collection is based on the idea of manipulating the body to create sculptural pieces through materials that are usually used in other fields,” Dalsjo said.

Among the Danish designers, Aase Hopstock showed her hyper-glamorous fall footwear, inspired by the works of Helmut Newton.

Frilly, girly ankle boots, wedge boots and sandals with laser cutouts came in a black-centric, dark and dramatic palette. The collection retails at around 300 pounds, or $475.

After last year’s successful partnership between Pitti Immagine and Lagos Fashion Week, a group of four Nigerian brands unveiled their creations in a colorful stand at Pitti W.

Taking inspiration from traditional Nigerian fabrics and decors, Ituen Basi — who last October was nominated “Designer of the Year” at the Africa Fashion Awards promoted by the 2012 Mercedes-Benz Fashion Week Africa — designed a practical, contemporary collection that included a silk and stretch cotton short-sleeve dress embellished with a print of multicolor African beads.

“In Nigeria, there are a lot of talented designers, but they need to be more supported, not only by the big companies but also by the government,” said Basi.

To help the new generation of African designers, architect Nwakaego Maduekwe, the creative mind behind the Alter Ego fashion label, said she has instituted a program for young fashion and design graduates to  spend some time at her company to practice and develop their technical skills.

The Alter Ego collection, which was strong in prints, consisted of feminine frocks, including a draped floor-length dress in silk.

“We are pretty big in Nigeria and we have points of sale in London, but we aim to expand our business across all of Europe,” Maduekwe said.