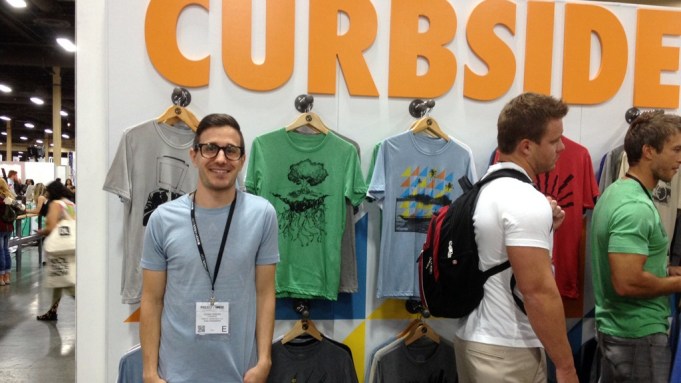 FIT TO A ‘T’: Pool Tradeshow is T-shirt heaven. There are kitschy, classic, colorful, cute and downright crass Ts from brands the likes of Solid Threads, Ames Bros., Choke Shirt Co., Hips and Hair, Neoclassics, Curbside and American Apparel, which spotlighted Ts of the cropped variety for spring. Of all of the T-shirt purveyors at Pool, Curbside had one of the most crowded booths, but creative director and owner Adam Hogan set aside a few minutes to talk to WWD about his brand and passion for the iconic style staple.

WWD: Tell me about Curbside.
Adam Hogan: We are based out of Omaha. I started the company myself about five years ago. Eventually, we opened a little retail boutique and started our own print shop collaborating with eight other artists around Omaha. All of the artists including myself do fine art and street art. One is a tattoo artist, and we do everything from comic book art to sculpture, anything you can think of. Curbside is a way of taking all that art and bringing it together to put it on clothing for the public.

WWD: Why make T-shirts in particular?
A.H.: Honestly, I’m a T-shirt guy myself. I spent a lot of time traveling around the world developing these concepts that I ended up putting on T-shirts. When I left for that trip, I had a backpack with 19 T-shirts, five pairs of jeans and that’s it. Over that period of time, I became obsessed with wearing a T-shirt every day. The idea is that you can put the art on a T-shirt, and it can move anywhere. It can go all around the world. Your art is traveling with the people who are wearing it.

WWD: Is there a T-shirt that you loved growing up?
A.H.: I probably shouldn’t be saying this, but I was obsessed with Obey for the longest time. I’m a big fan of Shepard Fairey, his work and everything he’s done. Those are the T-shirts that I was traveling with, actually, and eventually I wanted to put my own designs on them, express myself and do it my own way.

WWD: Is there a trick to art that works for T-shirts?
A.H.: There is. A lot of times we will have a piece of art that I think will be amazing on a T-shirt, mock it up on a computer and because of the scaling — if it is really wide — it doesn’t show well on a T-shirt. Tall and narrow is always the best and, basically, if you can read it from about 10 feet away, that’s the answer. If you have to get up close to see what the design is, you might lose people and the understanding of what’s on the shirt.

WWD: What are people interested in at Pool?
A.H.: They seem to be interested in all the art. It’s one of the more creative places at MAGIC, as far as I’m concerned. You have a lot of young professionals, a lot of young artists that are trying to make it and a lot of do-it-yourselfers. A lot of the people here don’t hire big companies to build their booths. For example, we built our booth by hand. We had never done it before. We just figured it out and made it happen.

WWD: Has T-shirt pricing changed a lot in the five years you’ve been in this business?
A.H.: A few years ago, I saw T-shirts retailing in the $30 range. I thought that was a little bit expensive. I was still willing to pay the price because of the soft shirts. I think prices have fallen a little bit because there is so much competition out there. For example, ours is at a $24 price point. We think that’s a good sweet spot. Not too expensive, but you are still able to stay in business.

WWD: What is the T-shirt that shoppers should be getting from Curbside this spring?
A.H.: I would say the Awake style from Gerard Pefung. It’s a huge elephant, multicolored. It looks like he is coming out of the darkness. I would also say Femme Fatale, which has a seductive-looking lady smoking a fancy cigarette. It kind of looks like old flapper style from the 1920s.