The basics collection will be priced at retail within the same range as the existing line, or between $80 and $200. 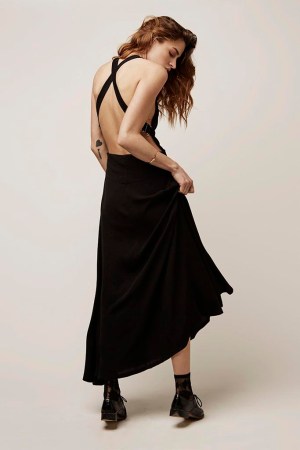 Amber Farr doesn’t want to get typecast as a boho dress designer with her label Flynn Skye, despite that being what helped the company along its rapid growth trajectory.

The company has carved a niche for itself as a quintessential California beach brand with flowing maxidresses and wide-leg jumpsuits in a raft of floral prints. That’s about to change when Flynn Skye this month launches Bitch’s Basics, a 13-piece basics line in solid colors, which is aimed at providing go-to pieces for the globetrotter.

“I want this to be a lifestyle brand,” Farr said from the upstairs loft of her new showroom and headquarters. “I don’t want it be known [only] as this bohemian brand.”

The basics collection will be priced at retail within the same range as the existing line, or between $80 and $200.

T-shirts and special occasion dresses are also on the way.

The Venice, Calif.-based label, not yet three years old, is set to see $5 million in sales this year, up 200 percent from the year-ago period. That’s after growing sales about 88 percent last year.

The brand is in about 300 stores, including boutiques and online e-tailers such as Revolve, Nasty Gal and Shopbop. The company’s now in talks with a major U.K. retailer that does business in the U.S.

Although Farr has the background — former stylist, Planet Blue designer and boutique owner — the company’s growth, she said, is due largely to activity surrounding the brand online and on Instagram, more specifically.

“It’s free marketing that you cannot get anywhere else,” Farr said. “Pretty amazing. And so I say a lot of it has just been luck because you don’t get that kind of support.”

She cited Instagram posts from starlets such as Vanessa Hudgens plugging the company’s sample sales as one example. When photographer Jenah Yamamoto of the Gypsy One Tumblr account, wore Flynn Skye, sales saw a temporary surge of 200 percent, according to Farr.

The growth finally pushed Farr, the company’s sole owner, about six months ago to move the company and its one employee out of her Venice home to its current spot on Abbot Kinney Boulevard, where there are now four workers.

E-commerce is about four months old for the brand but the “growth potential is massive,” Farr said. She was careful with her words, though, when asked if she sees the company’s direct, online business eclipsing the wholesale channel in the future. “I really nurture my accounts first but I think that the Web capability, it’s unreal. The margins are unreal,” she said.

A Flynn Skye brick-and-mortar store is in the works and Farr has her eyes on the up-and-coming Lincoln Boulevard in Venice as a potential location. The burgeoning street’s seen former Abbot Kinney businesses make the exodus there and Main Street in recent years.

Farr’s a bit of a free spirit. She describes herself as a tomboy and was a professional snowboarder. She’s also tried her hand as a stylist and then, through a friendship with Ling-Su Chinn of Santa Monica-based Planet Blue, wound up at the boho retailer doing everything from merchandising to later designing what became the company’s Blu Moon line. She has no formal training in design, can’t sketch and doesn’t know how to drape.

She left Planet Blue to open her boutique Blonde and operated that for about 10 years before starting Flynn Skye — named after her eight-year-old daughter — about two-and-a-half years ago with money she borrowed from her mom and friend to make about $10,000 worth of clothing. She estimates she gave away $9,000 of that.

She’s ambitious and wants to continue doubling the company’s sales, while keeping Flynn Skye close to the vest, with no outside investors.

“I’m an overachiever,” Farr said. “I have a fear of failure. I never want to do anything less than the season before. I feel like I have to keep [producing] other stuff. Fashion’s fickle.”