The retailer on Monday unveiled a pop-up shop at Selfridges in London that will operate through the summer. 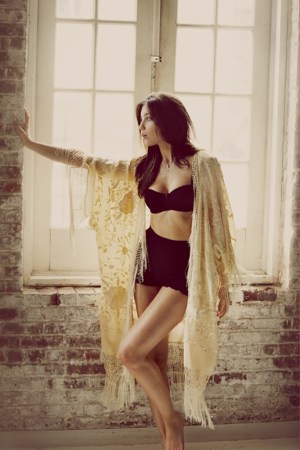 Free People is exporting its bohemian, romantic sensibility to Europe.

The retailer on Monday unveiled a pop-up shop at Selfridges in London that will operate through the summer. At the same time, Free People opened a 3,600-square-foot showroom in an old carriage house off the nearby Marylebone High Street. Krissy Meehan-Mashinsky, managing director of Free People wholesale, said the brand plans to open 75 points of sale in the U.K. and is also targeting Italy, Germany, Spain and France.

“That’s what this showroom is for, communicating with our department and specialty stores,” Meehan-Mashinsky said. “This will be the center for communicating with all our accounts in Europe. We’re targeting the stores and distributors throughout Europe we want to launch with. This is leading up to where we want to be in the future.”

The brand’s sister companies, Urban Outfitters and Anthropologie, which were introduced in the U.K. in 2004 and 2009, respectively, paved the way for Free People’s arrival in Europe. “Because they’re more retail and e-commerce brands and we’re really focusing on wholesale first and our e-commerce site, it’s a little bit different,” Meehan-Mashinsky said. “We’re pioneering the wholesale arena.”

The brand tapped British model Daisy Lowe for a worldwide advertising campaign consisting of a short film and look book.