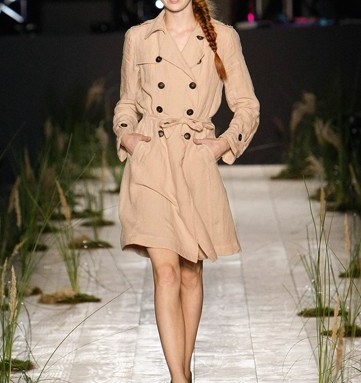 Even as French ready-to-wear sales slid 3.5 percent in 2009, local contemporary brands such as Sandro, Maje, Zadig & Voltaire and The Kooples posted double-digit sales growth and mushroomed on high streets from Lyon to London.

As the economy recovers, these Paris-based brands, some no more than five years old, are jumping ahead of the pack thanks to a mix of trend-driven yet sophisticated clothing that has resonated with both young and not-so-young consumers.

“Their price positioning effectively falls between designer brands that show on the catwalk and high street chains,” said Tancrède de Lalun, general merchandising manager for men’s and women’s apparel at department store Printemps. “They have created a market and a demand that did not exist before.”

With their “affordable luxury” positioning, these companies specialize in providing a constantly changing selection of new-season essentials at relatively accessible prices — and they’re coming soon to a store near you.

“It’s the right fashion at the right price, and what is absolutely terrific is that these are cross-generational brands, so that mother and daughter will often wear the same brand — something that hasn’t been seen before,” noted de Lalun.

Frédéric Biousse — chief executive officer of Sandro, Maje and Claudie Pierlot — said his brands are thriving despite the tepid outlook for retail in general.

“For us, 2009 was a very, very, very, very good year,” he reported. “I’m convinced that when your brand is solid, crises provide an opportunity to gain market share — and that is what has happened for Sandro and Maje.”

“We took advantage of the crisis in 2009 to accelerate the rationalization of processes, so we completely reviewed our software, logistics, stock levels, merchandise management and so forth,” explained Biousse.

The Kooples has also seen significant growth since it launched in September 2008. The brand has opened 73 points of sale in France so far and expects to have at least 150 worldwide within five years, in line with a business model that favors own stores over partnerships with multibrand outlets.

“A lot of rockers and singers come to us looking for slightly off-kilter rock ’n’ roll chic, but we also have very classical customers, people who work in finance or traders looking for a three-piece suit with a twist,” said Alexandre Elicha, artistic director of the brand.

Elicha, who co-founded The Kooples with his brothers Laurent and Raphael, created advance buzz for the brand with a teaser campaign of press and outdoor ads featuring hip real-life couples — straight, gay, young and old — photographed in nightclub settings in his casually elegant his-and-hers clothes. Each season sees the brand scouting for new couples among friends and acquaintances.

The Elichas are not exactly new to the industry. Their parents are the founders of the hugely successful Comptoir des Cotonniers, which they sold to Japanese group Fast Retailing Co. in 2006, and the idea for the couples campaign mirrors Comptoir’s iconic mother-daughter ads.

With the arrival of The Kooples and other newcomers, Comptoir’s once-dominant position in the French contemporary fashion segment is coming under growing pressure, though managing director Marianne Romestain remains sanguine.

“It’s inevitable. Comptoir opened a market, with brilliant results to boot, so it’s quite natural for other brands to also try to develop this segment,” she said. “We’re definitely facing more competition than when we were alone on this market, but at the same time, it spurs us on to be even better.”

Despite the challenging environment, Comptoir des Cotonniers reported an increase in like-for-like sales in 2009 compared with the previous year. “We are one of the few brands to have registered growth in 2009,” Romestain claimed.

The brand aims to have 1,000 points of sale worldwide by 2020 versus 380 today, and expects organic sales growth to top 10 percent in 2010. “We have seen very, very good results for last winter and the spring-summer collection now in stores,” she said.

In the near term, Comptoir — like a host of other French contemporary brands — is setting its sights on expanding in the U.S., where it has just opened a store in Greenwich, Conn., and plans an additional four in the next six months in New York, Boston, Chicago and on the West Coast.

“We offer a more laid-back approach to fashion than our foreign customers are used to,” explained Romestain. “It’s less about rules and more about having fun.”

Sandro and Maje are steaming ahead with expansion in the U.K., Italy and Spain, and hope to bring forward the planned date of their first U.S. store openings to March 2011 from March 2012 initially. Within the first year, the brands expect to have a presence in New York, Los Angeles, San Francisco, Miami, Washington, Chicago and Boston.

“The Anglo-Saxon market today is really looking for a breath of fresh air,” argued Biousse. “There are plenty of entry-price mass market brands that are doing very well, but when you look at the contemporary market, few brands have international potential.”

Sandro and Maje each opened a store last year on London’s Sloane Street, clocking up sales of 1.5 million pounds apiece, or $2.3 million, in their first year — 50 percent above initial forecasts, according to the chief executive officer.

The labels now have corners in leading British department stores Harrods, Selfridges and Harvey Nichols, and expect to open 10 stores in the next 12 months in the British capital’s retail hot spots, such as South Molton Street and Westbourne Grove. Sandro also launched last month on online retailer Net-a-porter.

Paul & Joe and Vanessa Bruno, meanwhile, are focusing on Los Angeles for their U.S. debut, the better to serve their Hollywood clientele, which includes Nicole Richie, Cheryl Cole and Kirsten Dunst. Paul & Joe recently unveiled a store on Robertson Boulevard, while Vanessa Bruno is opening in July on Melrose Avenue and hopes to follow this with a New York store within the next two years. In line with its policy of opening more own stores abroad, Vanessa Bruno is launching its first U.K. boutique in London in September and one in Beirut the same month.

The Kooples expects to raise the curtain on its first overseas store within the next 12 months. Elicha revealed the brand was in talks with Bloomingdale’s to open corners in some of its U.S. department stores and was scouting for retail locations in the U.K. and Japan.

“Initially, we weren’t planning to go abroad for another three or four years, but given that we are receiving interesting propositions, we’re thinking: Why not?” he explained.

Proof Asian customers are hankering for the French touch is the positive reception for Rue Madame, a multibrand store in Hong Kong carrying exclusively Gallic brands including Maje, Sandro, Iro, Manoush and American Retro. Ariane Zagury, founder and owner of the boutique that opened in April in the city’s tony Causeway Bay area, said local shoppers had responded particularly well to its service approach.

“We advise our customers the way we would advise our friends,” Zagury explained. “We realized that Hong Kong is an extremely fashionable and sophisticated city, but that it was really missing this niche that French brands address today: Superfeminine, supertrendy fashion that sits somewhere between luxury and the mass market.”

Not everyone is pleased with the spread of the new brands, many of which have emerged from the Sentier district, the traditional hub of the wholesale apparel trade in Paris.

Thierry Gillier, founder and chairman of Zadig & Voltaire, sees them as purveyors of fast fashion that have nothing in common with his luxury lifestyle brand.

“Affordable luxury is a concept I launched 10 years ago. Nowadays, I’m almost embarrassed by the tag,” he said. “Everybody is jumping on the bandwagon and following my lead, so I now find myself surrounded by copycats.”

Gillier is particularly irked by the trend for French brands to set up shop in clusters in areas like London’s Notting Hill, home to Zadig & Voltaire, Comptoir des Cotonniers, Paul & Joe and Les Petites, to name but a few.

Nonetheless, he is also forging ahead with new openings after successfully weathering the crisis in 2009. Zadig & Voltaire is opening 10 stores in France this year, including two Paris locations previously occupied by Hugo Boss, and is adding 25 stores overseas, including three New York boutiques, one in Singapore and one in Lebanon.

“You have to be global. From Nordic countries to Asia, we are opening stores in every important city, and we are constantly expanding whenever we find a space that suits us,” said Gillier, who expects to have 200 points of sale by the end of 2012 versus 120 today.

De Lalun at Printemps noted that the so-called Sentier brands had come a long way from their wholesale roots.

“They have shown their mettle,” he said. “They have made their operations more professional and created a new business model. That is what is so powerful about them. They have developed a new way of managing their brands.”