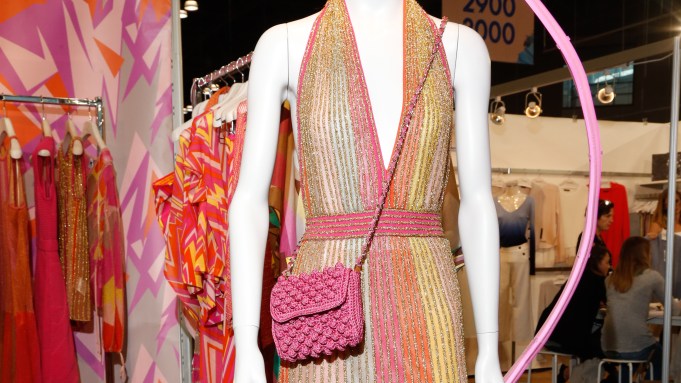 “It’s going really well,” said Tom Nastos, president, women’s fashion at UBM Americas, who was walking the aisles. “It’s been exceptionally busy. There’s a lot of buying going on.” He said there were many new brands showing at TMRW, which retailers had requested. He also noted that the integration with other trade shows (all under UBM) was going smoothly. “One badge gets you into all the shows,” he said. The show closes Tuesday.

Outside Coterie, Donna Karan’s Urban Zen set up a tent in the lobby showcasing artisanal home and accessories products from Haiti. The retailer was selling leather goods, bags, accessories and pottery. Margo Schneider, a 2016 Parsons graduate, told WWD she and Amanda Evengaurd were selected by Urban Zen and Parsons to spend two months in Haiti, learn new skills and make products as part of The DOT Center (Design, Organization and Training), a new artisan vocational training center in Port-au-Prince, Haiti.  The center is part of Karan’s commitment to President Clinton and the Clinton Global Initiative to bring vocational education to Haiti.

Retailers appeared pleased with what was on display at Coterie and were placing orders for tops that play up the shoulder area and ankle-length bottoms, embroidered tops, midiskirts and bomber jackets. Dresses, too, were in demand.

“We’re looking for floral print dresses,” said Nikki Kemper, manager of the Ellie Boutique in Greenville, Del. She said she was searching for things for spring that are “fun and flirty, but bra-friendly.” In addition, she bought some denim at Seven For All Mankind that had some “cool” treatment, as well as those with fringe and “high-low” hems. Margaret Smith, owner of the store, said she was buying some “cute and fresh” looks from Cooper & Ella, with washable fabrics.

Mimi Kypreos, owner of Mimi’s Boutique in Toronto, said she was shopping Coterie for things that were different from her last buy. “The clients wants something different,” she said. “I love all the peasant blouses for spring and the cold shoulder. It’s a very feminine season coming up.”

Mona Vida, owner of Chez Moi, a Forest Hills, N.Y., boutique, was shopping Coterie in search of  “a lot of leather jackets, denim and ripped jeans.” She said she wrote an order for ripped jeans at Blank Jeans. She was also heading over to the eveningwear section to check out Jovani and Terani Couture.

Vendors at Coterie said the traffic had been steady on Sunday and Monday, and they were doing brisk business. Brian Cytrynbaum, owner of Majestic, said, “We saw over 100 customers yesterday. For us, what’s doing well is luxury basics, anything that doesn’t compete with Zara,” he said. Majestic T-shirts wholesale for $40 and up. Among the looks doing well at the show were 100 percent cashmere machine-washable T-shirts, as well as 100 percent linen T-shirts. The brand sells in 54 countries. The company also manufactures for 175 luxury brands, in addition to its Majestic house brand, but at the show, they focus on the Majestic brand. “We’re completely vertical,” he said, noting the brand does its own knitting and dyeing in France, and sewing in Portugal, Italy and France. The yarns are from Germany. The company has 370 styles in their collection and focuses on the advanced contemporary and designer space.

Margaret O’Leary, the San Francisco-based luxury knitwear designer, was at the show, working with retailers. Her husband, Bill Green, chief operating officer, told WWD, “For us, it’s fantastic. We have a loyal following, and Margaret is physically here. We opened some new accounts and are doing a lot of repeat business,” he said. The company recently tapped Abraham Cruz as design director. Cruz, who came from See New York, is integrating sportswear with O’Leary’s knitwear.

Uri Minkoff, chief executive officer and co-founder of Rebecca Minkoff, was also working his booth at Coterie. “It’s been great. Yesterday was phenomenal. The buzz from our show has spilled over to a new viewpoint and growth area for the brand. We’re seeing existing stores and new stores that are shopping multiple categories,” said Minkoff. While the company is known for its accessories, Minkoff said they were experiencing a very strong apparel show as well.

Lisa Shaller-Goldberg, founder and creative director of Minnie Rose, said the brand took a sporty turn for spring. “It’s very sport driven. We’ve got stars and stripes, cottons and cashmeres, off-the-shoulder, and ribbed and lacy detailing,” said Shaller-Goldberg, who was wearing a kilted tennis skirt from the line. She said spring is running 30 percent ahead.

Avenue Montaigne was also having a good show. Meg Himmelfarb, sales manager, said, “Business is good. People are loving spring. We’ve added more casual pieces and added white denim with fringed bottoms ($105, wholesale, with a wide leg crop option at $100),” she said. She noted that all the linen pieces were really selling well. “Washed linen has been excellent,” she said.

Leigh Ellen Matheny, brand director of M Missoni, said this was the brand’s second time at Coterie, and the label was doing well with pink. “It’s all about pink and we’re known for our prints,” she said. “We came to the show to get in front of people we didn’t have access to before,” said Matheny, citing retailers from Alaska and Puerto Rico. The collection wholesales from $180 to $550 and is sold at retailers such as Saks Fifth Avenue, Neiman Marcus and Nordstrom.

Camilla, an Australian brand known for its caftans and prints, was showing at Coterie. The brand is expanding into shoes, accessories and home goods. All of the line is digitally printed and placement printed and stitched by hand. “It could take over a week to make a caftan,” said Sarah Macintosh, global sales director. The company has 222 stand-alone boutiques in Australia and shop-in-shops in Bali. The firm is building up its wholesale business, opening showrooms in L.A. and New York and focusing on opening stores.

John Eshaya, owner of Jet by John Eshaya, said he’s been super busy. “Yesterday was great,” he said. He said the brand was doing really well with novelty jerseys, novelty sweaters and Fifties pedal-pushers. “They’re doing amazing in 10 different washes,” he said. “They’re cropped, greased lighting pedal pushers and you feel like Sandy in ‘Grease,’” he said. He said his novelty sweaters “are somewhat sexy with little slits and little cut-aways are important.”