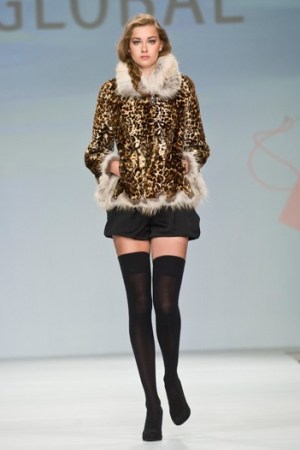 MONTREAL — The economic recovery appears to be taking hold, based on sales updates provided by stores at the North American Fur and Fashion Exposition Montreal.

That was welcome news after last year’s tough season, when most stores reported disappointing business. Lightweight everyday styles, especially sheared furs and reversible coats, fueled sales. The recent upswing helped lift buyers’ spirits at the three-day show, which closed May 4, but they are already planning on how to deal with an uptick of a different kind — next fall’s hike in mink prices.

“We did a lot better than last year, and we didn’t have to mark down either,” said Andre Ferber, owner of Jacques Ferber Furriers in Philadelphia, whose sales were down by a double-digit percentage in 2009 but were up by double digits this past season. “We carried less inventory and relied more on special orders. As a result, our profits were up nicely.”

While prices were similar to last year, they’ll be up by at least 30 percent next season, due to strong demand for mink, particularly in China and Russia, according to Ferber.

J.R. Gronauer, manager of Sakowitz Furs in Houston, expects that price hike to prompt some traditional mink buyers to trade down to beaver or fox next fall. “Some mink prices will be up 50 percent, depending on what you’re looking for,” said Gronauer.

His store has just had a “little bit better season” than last year, with value-added items outperforming high-end coats, he said. “My inventory levels are OK. But I had to mark down a month earlier than usual, and my open-to-buys will be a little bit less at NAFFEM,” Gronauer said.

Hal Waitz, buyer of wholesaler Herman Waitz & Co. of Chicago, saw a similar trend. “High-end items weren’t selling as well as mid- to lower-end product and casualwear. My sales last year were more fashion- and weather-driven than economic driven. My open-to-buy will depend on what fashion items I find at the show.”

Having bought conservatively, Simon said his inventory was clean and he did not start marking down merchandise until mid-January. With a strong open-to-buy, he was looking for one or two items that stand out. “I’m curious to see what Zuki and Paula Lishman have to offer,” Simon said.

Last year’s colder winter temperatures also helped drive sales for David Kriegsman, owner of Kriegsman’s Furs in Greensboro, N.C. Even though his inventory was wiped clean, he planned to buy cautiously at the shows. “When it gets cold, we are going to sell coats, despite the worst recession in years. Mink sold well, as did fur-lined jackets and mink pieces up to about $3,000, where we met price resistance.”

With the price of mink “going through the roof,” Kriegsman said he expects to sell more nonmink items next season and has even started to ramp up his own manufacturing of cashmere-and-mink and leather-and-mink combination garments.

Sales at Ribnick Furs in Minneapolis were ahead of last year, according to owner Bill Ribnick. A stronger economy, more seasonal winter temperatures and shoppers’ increasing demand for fur were helping sales. “Anything sheared, such as mink and beaver, and anything reversible was selling. We had no early markdowns, and my inventory is clean, so my open-to-buys will be ahead of last year,” he said.

As for next fall’s increased mink prices, Ribnick said he may have to take smaller markups and keep margins tighter, “which will not price us out of the goods.”

Lightweight, versatile coats have also been popular in Canada, according to Grant Ritchie, president of the Retail Fur Council of Canada and owner of Benzing-Charlebois Furs in Calgary, Alberta.

He said, “Our sales were up, but that’s because we pulled back on our stock due to a stronger market. Everything sheared was selling, but people were looking for fashion. If it’s not there, people will walk away.”

The economic downturn resulted in Canadian fur exports declining to $335 million last year from $430 million in 2008. But the Beautifully Canadian label and Fur is Green campaign launched in fall 2008 are starting to pay dividends, particularly in China, where one chain has increased its purchases of Canadian fur garments from $300,000 to $700,000 in two years. The figure is expected to top $1 million this year, according to Alan Herscovici, executive vice president of the Fur Council of Canada.

The collarless fur coatdress with shorter or detachable sleeves, mostly made from sheared beaver or sheared mink, is an emerging trend and fur neck rings are becoming a popular accessory, he said.

Canadian seal appeared to be making inroads in the fur-coat market, despite being banned in the U.S. A new German exhibitor at the show called SEAL has been marketing Canadian seal skins in China as a more attainable option to mink. Designer Bente Houmann Andersen, who heads up SEAL, said, “Seal is a younger and more affordable item, costing 60 percent less than mink.”