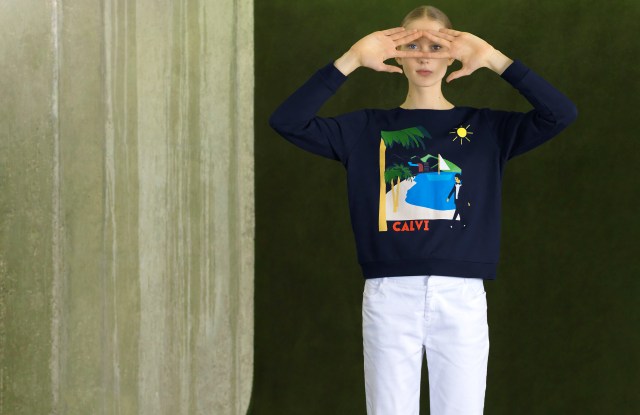 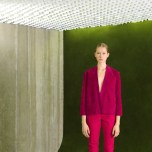 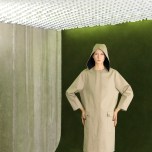 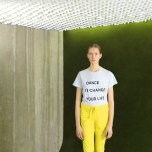 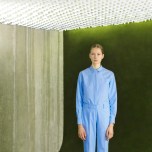 Ivanez presented the collection at a launch party in the French communist party’s Paris headquarters on Monday. The designer screened a short publicity film in which the dancer Leo Zurfluh danced through the mid-Sixties modern structure — reimagined as a “Central Committee for Elegance for All” — wearing looks from the collection, including a blazer and matching chinos in bold crimson.

“Elegance for all” could well be the goal for Galeries Lafayette’s new namesake brand, which has replaced all but three of more than a dozen labels produced by the store up until just a few years ago.

With her first collection for the retailer, Ivanez wanted to create something coherent and impactful, but that would appeal to a broad swath of the French department store chain’s clients.

“It wasn’t easy,” Ivanez admitted. “The Galeries Lafayette woman can be from Paris, the provinces or abroad. So I wanted the collection to be very accessible, but to still have an identity.

“Ultimately I do think the aesthetic is Parisian,” she said, “but it’s about a Parisian who loves color.”

Over the course of a year since being named artistic director, Ivanez was tasked with reconfiguring an extensive offer — ultimately arriving at a spring 2017 collection that includes a full 280 references.

“There were many items in the offer that simply needed to be cleaned up or cared for,” Ivanez said. “Certain things I wanted to make more joyful, other times I wanted them to be more delicate.”

Consolidating a segmented offer under the Galeries Lafayette name should help to boost awareness for the store’s private-label creations, according to Elisabeth Cazorla, the department store group’s head of rtw.

“Galeries Lafayette is a name that means something to people — in France and abroad,” Cazorla said. “To keep a brand going you need recognition. Previous brands like Briefing and Version Originale were more precise, but it wasn’t possible to promote each one sufficiently.”

“We feel that Galeries Lafayette has a certain level of authority in fashion, and that this is the image we should capitalize on,” said Guillaume Houzé, a board member of the family-owned company and the store’s image and communications director.

Houzé saluted Ivanez’s first collection at Monday’s launch, saying it was “chic, simple, made with good feeling and very colorful.”

In addition to the Galeries Lafayette brand, the store has retained the preppier Jodphur line for women, the work-friendly Comptoir GL brand for men, and the storybook-inspired Cadet Rousselle for children.

The French department store group has been pushing to reinvigorate the store’s image and reinforce its fashion credibility. In 2015, the company changed its logo and published a multichannel ad campaign with a cast of young and diverse models, all captioned “C’est le nouveau chic.”

In addition to appointing Ivanez as artistic director for women’s rtw, this year has also seen the company create the post of a storewide “fashion editor” who works with buyers and merchandising staff across departments.

“We have had this desire to add an additional fashion dimension to our brand,” Cazorla explained.

The short film directed by Alexandra Leroux and Damien de Medeiros is not the only dance feature the group has sponsored this year. In November, Horde produced a digital short for the Galeries Lafayette’s charitable foundation in which a troupe of “smoke sculptors” called Mutant 7 blew elaborate smoke rings and danced through the foundation’s unfinished space.