Experts at the Sourcing at MAGIC show said consumer interest and attention from politicians has raised the focus on where textile and apparel are manufactured. 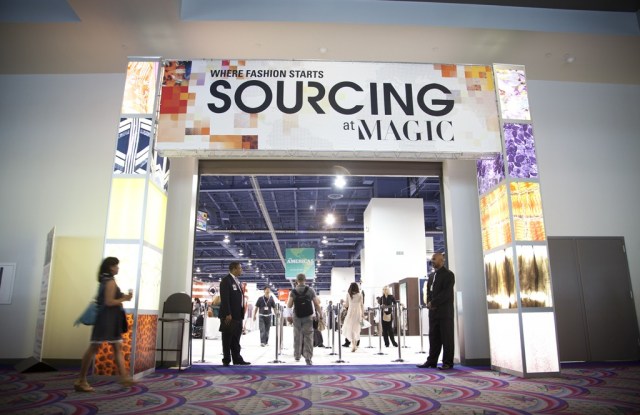 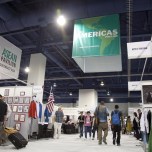 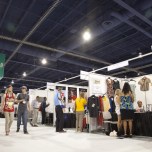 Experts at the Sourcing at MAGIC show said rising interest from consumers and escalating attention from politicians has heightened the focus on where textiles and apparel are manufactured. In the challenging global economy, buyers sought the most advantageous deals, while vendors and the governments backing them promoted free-trade agreements, prices and other factors that gave them an edge.

With more than 1,100 apparel, accessories and footwear resources from 43 countries, the expo shown a spotlight on certain regions. There was the debut of the ASEAN section, which presented more than 50 exhibitors from Southeast Asian countries such as Thailand, Indonesia and Vietnam. Returning for a sophomore appearance after making its premiere in August 2011, the Americas pavilion featured 40 U.S. textile firms and several from Central and South America, and Mexico. The pavilion also included a new Made in Los Angeles sector, where, thanks to a sponsorship from the City of Los Angeles, 11 companies tried to fuel the resurgence for domestic production in the nation’s apparel manufacturing hub.

RELATED STORY: Made in America, Domestic Sourcing on the Rise >>

Los Angeles Mayor Antonio Villaraigosa, along with Francisco Sánchez, undersecretary for international trade at the U.S. Commerce Department, made the case for American manufacturing at a seminar held on the show’s first day. Villaraigosa said Los Angeles is investing billions of dollars in its transportation infrastructure, including $1.2 billion to improve the Port of Los Angeles.

“No city in the country is investing as much,” Villaraigosa said. “With all of these infrastructure investments, we’re making it even easier for L.A. companies to get their apparel products from factory to market, make it easier for employees to get to work or make it easier for customers to get out and buy all the clothes being made in L.A.”

Design Knit Inc., a Los Angeles-based knitting mill that has been in business for 27 years, said it was able to expand the geographical base of potential customers by participating in the Made in Los Angeles group. In contrast to the designers from Los Angeles and San Francisco it sees at trade shows in Southern California, it met with customers from Pennsylvania, Florida, Nevada and Washington while in Las Vegas.

Ark Apparel tried to drum up more business for its three-month-old cut-and-sew business from its perch in the Made in Los Angeles pavilion. The firm specializes in small orders of 50 to 1,000 pieces. Working with denim brands with jeans that retail for $120 and higher, it charges $40 a piece for cutting and sewing basic five-pocket jeans. The entire process from approving production samples to delivering the finished goods takes four weeks, with an additional week required if washes are involved.

“If you make a quality product, people will buy it,” said Noah Landis, Ark’s project manager. “But you’ve got to make it on time [in] four weeks. It can’t be four months.”

Still, pricing remains the key factor in shifting production to the U.S. from overseas.

New England Shirt Co. of Fall River, Mass., balanced out its prices that reach up to $85 a shirt with a no-minimum policy and a turnaround of four weeks. Alan Ng, vice president of Dynatex Inc., a contract manufacturer in Brooklyn, N.Y., said the biggest challenge to U.S. manufacturing is convincing customers that “the value of Made in USA is worth it, even if you have to pay more.”

For Brooks Brothers Manufacturing Group, the question is how much more potential customers are willing to pay. Brooks Brothers, which produces apparel for Ralph Lauren and other better brands, said prices start at $22.50 for ties, $40 for shirts and $250 for jackets.

“There definitely seems to be a lot of renewed interest in Made in America,” said Robert Squillaro, a merchandising and sales manager at Brooks Brothers Manufacturing. “When push comes to shove, we’ll see how interested they are when they get the price quote.”

Tiffany Munn, a designer from Anchorage, didn’t need much convincing to decide to manufacture most of her new swim and resort line called Munn & Fields in New York. She balked at the minimum requirement for orders set by foreign factories.

Competitors to Chinese companies also made their case to potential customers. JY International, a first-time exhibitor from Seoul, not only capitalized on the recent free-trade agreement between the U.S. and South Korea, but also adjusted its prices to range between $6 and $15 for tops and $10 to $20 for dresses.

Miracle Fashion Co., another new exhibitor that participated in the ASEAN pavilion, displayed samples of its interpretation of top trends, including a one-shoulder black gown with sheer draping and a black and white polka dot bodice layered on a pastel floral skirt.

India’s Magnolia Martinique Clothing offered lower prices combined with attention to detail. While prices start at $6 a garment, Magnolia produced an intricate strapless dress for Anthropologie with an acid-washed cotton-voile body and macramé trim at $90 apiece.

Despite rising prices, China’s Guangzhou Piliao Leather Co. received positive responses for its canvas bags that have been waxed, garment-dyed, acid-washed, ombré-dyed and undergone other trendy treatments. In the past year, workers’ wages increased 30 percent, forcing the company to raise prices. One customer, Urban Outfitters, couldn’t afford to produce a second batch of a top-selling style that already sold 50,000 units due to higher costs. Now charging $6 to $13 an item, Guangzhou Piliao Leather said it retains its competitive edge with a minimum order of 300 pieces and a production schedule of 30 to 45 days.