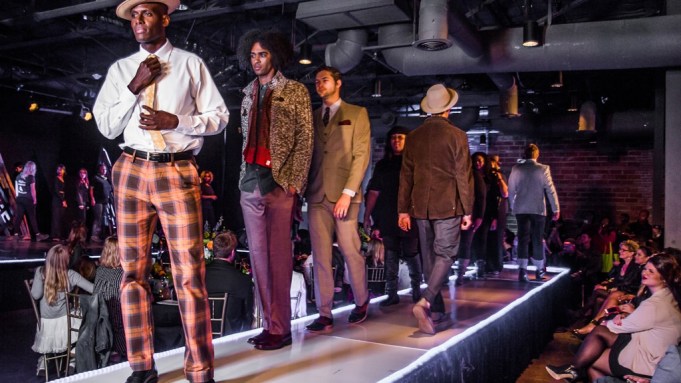 DALLAS — At 87 years of age, Haggar Clothing Co. is reinventing itself as a lifestyle brand that can dress men of all ages in apparel ranging from classic to cool.

“Our overall strategic direction and plan really involves extending beyond our core men’s wear business,” explained Michael Stitt, chief executive officer. “We are getting into new categories and going international, and part of that is new labels.”

The hipster Haggar Vintage bottoms sport plaids that are identical to the ones found on 40- and 50-year-old Haggar pants. They’ll be sold come spring on the company’s Web site, ticketed somewhat higher than Haggar’s average $30 to $40 pants. The goal is to land Haggar Vintage pants next fall in Millennial-oriented retailers that have never carried the brand, Stitt said. The dark denim is also due next fall under the label Mustang, a trademark the company owns in the U.S., according to design director Rafael Soto.

“We want to protect and grow our core men’s bottoms, and within that we have our classic traditional offering that has a tremendous following across North America, and at the same time also have an offering that is more modern and updated,” Stitt explained. “In addition, we want to make it more of a lifestyle brand from dress to casual for all occasions with the introduction of sweaters, dress shirts and other accessories and, of course, suit separates are an important part of our future plans.”

Haggar has big expectations for Cotton Performance Slacks, a retro-inspired label launching in the spring to a broad demographic target. Breathable, wrinkle- and soil-resistant, the pants are cut in straight and slim fits and designed for work and leisure. They hark back to Haggar’s coining of the term “slacks” — pants for slack time — back in 1938.

“We had done some pretty extensive research eight months back and found that over 50 percent of men are looking for pants for an everyday occasion, especially Millennials looking for 24/7 pants,” noted Tim Lyons, president. “That’s when this idea of slacks started coming back to us.” Besides design inspiration, Haggar’s heritage is a useful marketing tool, Stitt noted.

“We think we have this interesting story to tell that will resonate in other parts of the world, particularly with our Texas heritage, which is somewhat unique to us,” he said. He said sales are up 10 percent this year and he’s projecting the same double-digit gains for next year, not including Tribal.

Now counting 7,500 doors, including every Target carrying the label Haggar H26, the company is getting close to the sales peak of $476 million it reached before it was taken private in 2005. Since then, it has shed its private-label business and most of its women’s wear. Haggar is jointly owned by Perseus LLC, a merchant bank and private equity company, and a unit of Pou Chen Group, a Taiwan shoe manufacturer.

The company still offers Haggar classic misses sportswear in Canada, and the line will get a design boost via the Tribal acquisition, Stitt said. He’d also sees potential for Tribal to create a new label for department stores.

A Canadian, Stitt has been a Haggar executive since 1999 and was promoted to ceo in 2012. He’s intent on creating a culture of enthusiasm and entrepreneurship at the company.

Noted Stitt, “Our goal is for everyone to get really excited about being at work, and we’re trying to do everything we can to realize that environment.”