HBO Heads Inside the Garment Center 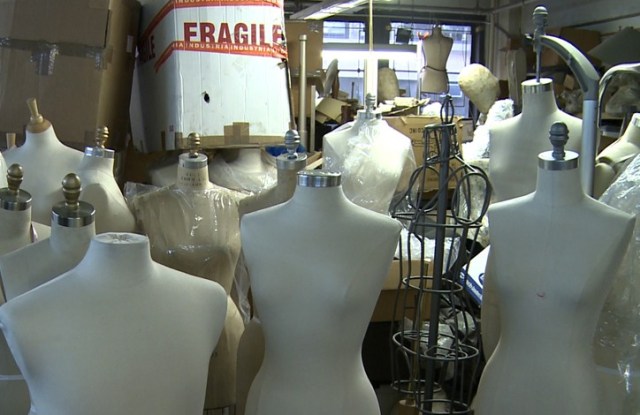 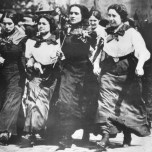 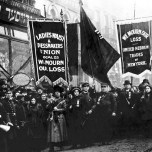 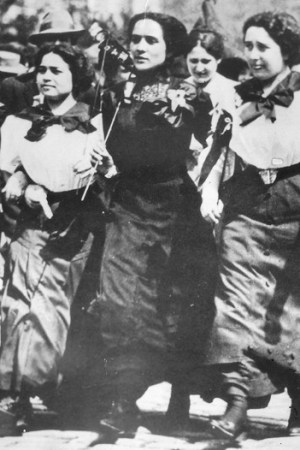 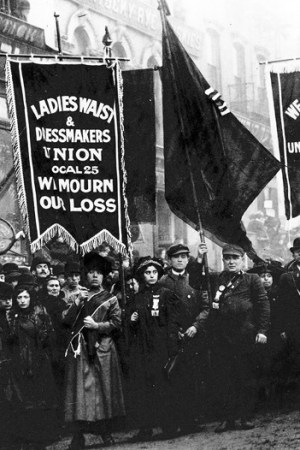 Having tackled such weighty subjects as Alzheimer’s disease, addiction, serial killers and Baghdad hospitals in its documentaries, HBO has now zoomed in on New York’s garment center, chronicling its monumental past and its precarious present.

More than a snapshot of America’s dwindling manufacturing prowess or a postscript for a time gone by, HBO’s history of the garment center mirrors dramatic social and economic issues affecting American culture. The escalating threat of unemployment; globalization’s fallout; immigrant struggles; the increasingly unattainable middle-class lifestyle; Wall Street’s impact on the fashion industry and other financial sectors; unions’ role in government, child labor; sweatshop abuses, and marketing frenzy are issues that transcend the physical nexus of Seventh Avenue and the fashion industry.

From pushcart vendors hustling on the Lower East Side 100 years ago to models marching down the Bryant Park runways in designer clothes, the 74-minute film traces the fits and starts of an industry under siege. “Schmatta: Rags to Riches to Rags” is loaded with archival images and will premiere at the Toronto Film Festival on Sept. 13 and airing on HBO Oct. 19.

The rise and fall of the garment industry is presented as a human story, where scores of New Yorkers have ancestral roots, according to director and producer Marc Levin, whose great-grandfather invented the adjustable dress form. It is also a story laced with social, political and financial issues that remain as poignant today as yesterday, he added, noting how a 2007 Bangladesh fire left 46 dead some 96 years after the Triangle Shirtwaist Fire claimed the lives of 146 workers.

“Fashion, and the culture of consumption, and shopping have been so much a part of who we are that this will hopefully be a way of looking in the mirror and reevaluating, ‘How do we look?’ It’s surprising how this history can be forgotten,” said Levin. While filming at the Fashion Institute of Technology’s commencement last year, many graduates did not know the meaning of “schmatta” or recognize the name one of the most influential and colorful union leaders in the history of Seventh Avenue, the late David Dubinsky, who happens to have a building on campus named for him.

Industry types need not be reminded that the garment industry was once New York City’s biggest employer with “hundreds of thousands” of workers, just one of many statistics sprinkled throughout the film. Former president John F. Kennedy put outsourcing in motion by allowing 5 percent of garments to be produced outside the U.S., and today only 5 percent of garments are American-made, the film reports. Flashed across the screen at one point is a stat claiming 2008 holiday sales hit a 30-year low.

Even Levin witnessed a dramatic shift in the industry while working on the film. Recalling his trip to a fashion show after Lehman Bros. floundered last fall, Levin said, “It was like the emperor has no clothes. Here we were told all these things — globalization, automation, deregulation — this was going to get rid of all the dirty work for us, but we were going to get all the good jobs and we were going to maintain our standard of living or get wealthier. And you could shop till you dropped, you could run up your credit card and the market was infallible, and it was better to market than manufacture, and it was better to use credit than to save. It was a whole culture for 25 to 30 years, and all of a sudden it had been stripped naked. And it was like all of a sudden it was an illusion; it was all a fantasy. Again, clothes were a methodology; they were a metaphor for that world.”

Numbers aside, “Schmatta” uses old footage and still photographs to remind viewers of a decidedly different Seventh Avenue, where rolling racks made pedestrians watch their backs, delivery trucks crowded garment center streets, buyers perched themselves on showroom sofas as elegant models sauntered past, and tough-talking, cigar-smoking garmentos haggled for the best prices. One worker spoke of how keeping your head down was now the best way to keep a job and keep food on your family’s table. Working in the industry used to be seen as “a gentleman’s job,” he said. Workers were known as “knights of labor,” and “they were proud.”

“Schmatta” seeks to give a voice to the unsung worker — so much so that the razzle-dazzle of today’s celebrity-infested fashion scene is largely downplayed, save for token clips of J. Lo, Sofia Coppola, Hilary Duff, Victoria Beckham and other notables dashing into Bryant Park fashion shows. As accessories manufacturer Bob Winters says in the film, “[Everyone thinks] the fashion industry is very glamorous. You see these gorgeous models — my God. It looks wonderful. What a happy life. Everyone is glamorous and made up, but you don’t see where that all starts.”

Levin said, “They all seemed to be saying, ‘The American economy used to provide jobs that you could make a decent living at, and will that ever happen again? Wow, look how these people did come over [from other countries] and they got a break, and this kind of work was a way into America.”

The documentary also sheds light on the industry’s inner workings, labor movement and political wheeling and dealings. News of the Triangle Shirtwaist Fire caused such an uprising that 100,000 people marched in the funeral procession and 400,000 lined the streets and triggered a turning point in the labor movement under the banner, “Who is going to protect the working girl?” according to National Labor Committee director Charles Kernaghan. He is one of several recurring union supporters who plugs the importance of labor throughout the film.

There are also clips of Kennedy campaigning at a Seventh Avenue rally, swarmed by well-wisher, and Dubinsky on the horn giving another senator an earful about the need for legislation that would guarantee a 35-hour work week.

“Schmatta” offers other glimpses of the past, including Amalgamated Clothing Workers of America founder Sidney Hillman’s foresight to build housing for workers and to create the first labor bank in the U.S. in 1923. That serves as a testament to a time when government, labor unions and the apparel industry appeared more interlocked despite their differences: In the film, Hillman’s daughter points out how due to the union’s strength former president Franklin Delano Roosevelt, confronted by certain labor and economic issues, routinely said, “Clear it with Sidney.”

Not surprisingly, Workers United president Bruce Raynor, who appears throughout the film, said, “I thought it was a terrific, very passionate and accurate history of the garment industry in New York. It shows how workers, designers and business people have had a tremendous impact on the city of New York and the country….New York is known as the fashion capital of the world because we have the garment center — not simply because we have designers here. We have designers, models, pattern makers and everyone else here.”

Despite his enthusiasm, Raynor said he was concerned some viewers would be nonplussed by the movement of jobs overseas, though he does not think that was HBO’s intended effect. “It is important that that is not the lesson,” he said, noting some financial analysts have speculated about a resurgence in domestic manufacturing. “It definitely will come back,” he said. “That could not only trigger a recovery but also be reversed,” he said.

While there is footage of Halston, Calvin Klein, Bill Bass, Ralph Lauren, Tommy Hilfiger and Donna Karan, none of those designers were interviewed for the documentary. Anna Sui, Isaac Mizrahi and Stan Herman are among the few working designers who got in front of the camera for “Schmatta.” Sigrid Olsen, whose signature company was bought by Liz Claiborne in 1999 and closed in 2008, said her brand has been one of the company’s most profitable divisions in 2005, but things changed quickly. She also recalled the aggressive growth strategy set forth at the first corporate meeting with Claiborne executives, which left her wondering, “And how are we going to do that?”

Olsen touched upon how removed some executives have gotten from the brands they sell. “There are people in some of these corporations who never see the actual clothes, and they’re the ones making the major decisions,” Olsen said.

Producer Daphne Pinkerton said she was not that well-versed about the garment industry and presumed, like many Americans have, that the passing of NAFTA (North American Free Trade Agreement) outsourced labor and production jobs no one wanted. “What we found out was there was this incredibly vibrant and diversified economy that was multilayered and had offered upward mobility for a lot of people,” she said. “What wound up happening is we outsourced the labor without any standards, and people think that’s alright. That’s what was so disturbing — that people think it’s OK.”

But not everyone does. The Fashion Center Business Improvement District’s executive director Barbara Randall said the film made her “weep.”

As much as she believes in clustering the industry, and in New York City keeping its status as the home of American fashion, Randall questioned the Save the Garment Center’s marching orders.

“Save the Garment District does not have a call to action….The movement does not indicate what it is that we should be doing to save the industry. Usually there is a call to action. Don’t get AIDS — wear a condom. Don’t die of breast cancer — get a mammogram. Specifically, what could be done by the fashion community to save the industry? Well, you could say, ‘Save the Garment District by buying NYC-made apparel or keeping your production here.’ But it is not clear what is being asked,” she said.

HBO also explored the ongoing Save the Garment Center campaign, highlighting it in an eight-minute film that may run on a continuous loop in the Bryant Park tents. Sui, Lepore and others have been lobbying to secure ample space in the neighborhood, which has been the epicenter for fashion design and manufacturing since the early 20th century.

A montage of both black-and-white and color images, film clips and taped interviews capture the area’s hustle and bustle. There are also such musical flashbacks as Gershwin’s “Rhapsody in Blue,” Clarence Smith’s “Boogie Woogie” and Adler and Ross’ “Rags to Riches” that heighten the shadow of time.