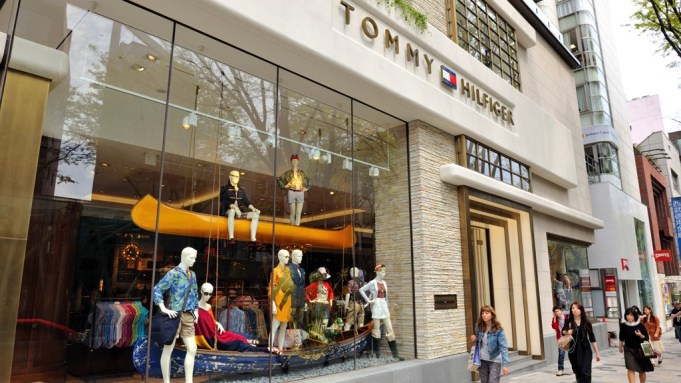 In a move that was more than two-and-a-half years in the making, Tommy Hilfiger on Wednesday will open an 11,000-square-foot flagship in an impossible-to-miss location on the intersection of Omotesando and Meiji Dori, two of the city’s busiest streets. The three-level store is brimming with imported relics and symbols of Americana, including antique canoes, an authentic New York fire escape in green wrought iron, vintage metal signs, subway turnstiles and leather wrestling benches. The work of Frank Lloyd Wright inspired the stone facade and a wallpaper designed by the architect graces a section of the tailored men’s section.

“I’ve been coming to Tokyo for 30 years and I remember just shopping in Laforet [retail mall], just sort of canvassing this whole area. This location, in my opinion, is probably the best location you can possibly get in Tokyo for our customer base and what we’re trying to do,” said the designer, staying true to his brand’s logo by donning a white-trimmed navy blazer and red pants.

“We’ve been in this marketplace for 25 years and we’ve been known to be a casual sportswear company. Now we’re bringing the entire lifestyle to Japan,” Hilfiger said of the store, which anchors a new tree-topped retail complex called Tokyu Plaza Omotesando Harajuku that will also house American Eagle Outfitters’ first outpost in Japan. “I think the Japanese people are more daring because they’re not afraid to wear pattern with pattern. They’re not afraid of color, so that’s exciting to us.”

Making his first trip to Japan in five years, Hilfiger appeared upbeat, speaking of his desire to explore the city’s shops and art galleries. He hammed it up as he posed for a photo in front of a large sculpture by John Catrambone, which graces a wall of the store. The piece, which brings together the red, white and blue of the American flag, features a collage of seemingly random American pop culture artifacts including a Raggedy Ann doll, a “Star Wars” Stormtrooper helmet and a Sixties-era Cadillac tail fin. Hilfiger gleefully tapped the keys of an old typewriter protruding from the artwork.

The American brand, which is wholly owned by PVH Corp., will host an in-store cocktail gathering tonight, followed by a second event featuring the musical stylings of DJ Cassidy. Jessica Alba and her husband, Cash Warren, are expected to attend the festivities.

The new store, the brand’s biggest in Asia and its first true flagship in the region, offers a full range of men’s and women’s sportswear as well as a large offering of denim, children’s wear, footwear and accessories. The Italian-produced Tommy Hilfiger runway collections are also available at the store, marking their debut in the Japanese market. In another first for Japan, Tommy Hilfiger is offering its bespoke tailoring service for men, which allows them to customize linings, pockets, buttons and other suiting details. American vintage pieces from the Fifties and Sixties are scattered throughout the store and mixed in with Tommy Hilfiger’s own products. The brand also developed a colorful Japan-exclusive golf line featuring pieces in Egyptian cotton.

Apart from the runway collection, the rest of the products in the store were tweaked to fit the smaller frames of the Japanese customer. Hilfiger said the brand’s creative teams in the U.S. and Europe designed the merchandise and used the same colors, fabrics and shapes as it does elsewhere around the world. As to be expected, there are plenty of takes on varsity jackets, cricket sweaters and polo shirts, as well as some retro-infused pieces for women with a Mary Tyler Moore vibe.

The ground floor houses men’s casual and tailored clothing, men’s and women’s denim occupies the lower level and women’s and children’s collections make their home on the airy third floor. But Hilfiger stressed that items from the various collections are mixed on the mannequins to fully illustrate the potential for “eclectic” combinations, and to jibe with the way people actually wear the brand.

“You can wear any of the tailored pieces with jeanswear, with casual, and mix and match it any way,” he explained.

While Hilfiger has a relatively substantial presence in Japan, with about 160 stores, it has lacked a statement store and, as a consequence, has had limited visibility in the market. Rivals for the polo set, such as Ralph Lauren and its younger Rugby line as well as Abercrombie & Fitch, have opened large stores here in the meantime. But Hilfiger said he thinks the brand’s ability to adapt to local markets in terms of fit and taste give it a competitive edge.

“[Ralph Lauren and Abercrombie] have their own sense of being and they have their own customer base. They’re pretty much the same all over the world. But we have a lot of surprises in different regions,” he said, going on to explain that tweaking for local markets has worked well in Europe for many years and the company plans to follow the same formula elsewhere.

Fred Gehring, global chief executive of Tommy Hilfiger, said the new store is part of a broader strategy to boost the brand’s visibility within Japan. Back in 2008, the company ended its relationship with former partner Itochu and bought control of its Japan operations. Gehring said the partnership helped grow the business substantially but the brand didn’t have the high-profile locations it needed. The Tokyo flagship, along with the opening of a smaller store in Osaka later this month and a push to ramp up marketing efforts, should change that, the executive said.

“The brand’s visibility in the market was a little bit underinvested, and that’s what we’re now trying to correct,” Gehring said.

Tommy Hilfiger did $285 million in retail sales in Japan last year, a spokeswoman said. While the market’s growth for the brand has been “flatish” for the past couple of years, Gehring said the business here is successful and profitable and there is room to steal market share from competitors. Most of Hilfiger’s existing stores in Japan are smaller locations in malls, and the company is aiming to boost the size of these outlets as part of its Japan push.

“It’s a major powerhouse market, and our brand is underdeveloped there….We have a lot of catching up to do,” Gehring said. “I’m not saying we’re, per se, as naturally bullish as you would be on the outlook in China, Brazil or Russia, those kinds of markets. But it’s certainly seen as one of our major growth stories for the next five years.”

The executive declined to give any sales forecasts or to quantify the investment in the store but said it was “substantial” given the value of real estate in the area.

John Ermatinger, Hilfiger’s newly tapped ceo for Asia, has a keen knowledge of the value of the store’s location on Omotesando. He used to oversee the Asia business of The Gap, which used to occupy the same space until a few years ago, and served as a major landmark and meeting spot for locals and tourists. The building housing the Gap store was subsequently demolished to make way for the new Tokyu Plaza complex.

“The investment, while significant, we believe will establish the brand in a way that Japan consumers have never seen before,” Ermatinger said.

Prices at the Tokyo store are roughly in line with those in Europe, where the brand has the largest number of direct retail locations, Gehring said. Sportswear items start at about 5,000 yen, or $61.78 at current exchange, while runway collection pieces run as high as 200,000 yen, or $2,471. The executive said “market pressures” might have forced the company to cut its prices in some cases but it is working to bring them in line with the rest of the world.

In line with plans to expand in the region, Tommy Hilfiger is also investing in China and India, but Gehring said it is too early to talk specifics on strategy. Last week, the company opened an “anchor store” on Nathan Road in the Tsim Sha Tsui district in Hong Kong.

Hilfiger said the new Tokyo flagship seeks to replicate the success of similarly important outposts in Paris, London, Milan, New York and Munich. “As a global lifestyle brand, we feel it’s important to show the entire world of Tommy Hilfiger in key cities in the world,” he said.

The designer, who arrived in Tokyo on Thursday, had not had much of a chance to observe the climate of the city a little more than a year after the devastating tsunami hit the northeastern part of the country. But he said he’s getting encouraging feedback from his team here.

“I think it seems like it is coming back. People are having more confidence. It seems like the spirit is more positive,” Hilfiger said. “I see a lot of activity on the streets. I see a lot of people shopping and moving around, and I think that’s a very positive sign.”