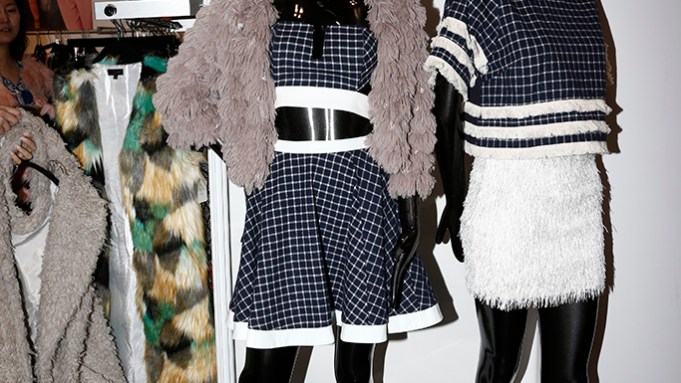 NEW YORK — Items for immediate deliveries and dresses were the main trends at the Moda and Fame trade shows here this week at the Jacob K. Javits Convention Center.

Some exhibitors said traffic was down, attributing it to the long winter that left retailers with a surfeit of cold weather and spring merchandise, while others said the change in dates of the show impacted traffic. Trade-show owner BJI Fashion Group pushed Moda, which targets the modern missy market, and Fame, which represents the junior and young contemporary market, up a week earlier to coincide with ENK’s Accessories Circuit and Intermezzo.

“We found retailers liked the idea of the show held further away from Mother’s Day, and it enabled BJI and ENK an opportunity to run together under one roof,” said Britton Jones, president and chief executive officer of BJI Fashion Group, who added the May market, which is typically held in April, tends to be spottier than other market weeks.

According to Jones, buyers from 45 states and 50 countries attended the show and he was pleased with the turnout. “Monday was an outstanding day for both shows, Tuesday was also good and Wednesday was slower.  Retailing continues to be a challenge for all of us,” he said.

Arthur Toth, president of La Grande Dame Inc., a plus-size women’s boutique in Richmond, said the May shows are never key for him. “I’m shopping like it’s a second round for fall. So far I have written some immediates,” he said.

Hanna Park, designer at Lovposh, found that buyers were also interested in winter items, including faux-fur vests, colored faux-fur coats and fuzzy sweaters. “Buyers are gravitating toward warmer and fall stuff because it’s colder. They are committing to fall and winter merchandise more than I was expecting,” said Park. Lovposh faux-fur vests wholesale for $25 to $30.

Hannah Yoon, sales and trade show coordinator at Umgee USA, found that buyers have been more risk-averse and are ordering items that work for a wider range of customers. “Buyers are picking up stuff that targets the daughter, mom and grandmother, too,” said Yoon, who also observed an uptick in her plus-size collection. Yoon said maxidresses, parkas, duster cardigans and flannel shirts did well. Umgee tops wholesale from $8.75 to $11.75, outerwear wholesales for $20.75 and dresses wholesale from $12.75 to $15.75.

Over at Moda, dresses were trending along with cropped jackets and classic white shirts with interesting details such as peplums and back buttons.

A sleeveless printed cotton dress was a hot item at Mata Traders, said founder Maureen Dunn. Although Dunn wasn’t impressed with the traffic, she did acquire 13 new customers. Mata Traders’ cotton dresses, which are handmade by women’s cooperatives and artisan groups in Nepal and India, wholesale from $28 to $38.

Robin Beitman, president of Karen Harman New York, said a faux-leather tunic and skater skirt did really well, in addition to a ponte knit skirt, a cropped dinner jacket, black tap shorts and a collared white shirt with buttons on the back. Beitman also noticed a decrease in traffic. “Stores have a lot of spring, so they are scared. Our fear is that they are going to come in at the last minute and say ‘we want fall.’ But we are made in the U.S., so we can answer their needs,” she said. The tunic wholesales for $130, the cropped satin jacket wholesales for $158, the tap shorts wholesale for $65 and the faux-leather skater skirt wholesales for $98.