Retailers and vendors at two New York trade shows were candid about the challenges they’re facing in the shaky economy. 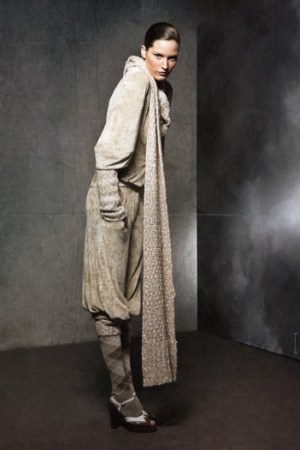 Retailers and vendors at two New York trade shows were candid about the challenges they’re facing in the shaky economy. But far from being defeated, they talked about how to adapt.

In their view, the recession requires companies to provide tip-top customer service, a greater emphasis on trunk shows, out-of-the-norm styles and sharp prices to get their newly spendthrift customers coming back. While not exactly lively, the mood at Designers at the Jumeirah Essex House and at Atelier Designs was determined. The former had a strong showing, with 48 resources represented at the three-day show, which closed Feb. 23. Several organizers and vendors at Atelier, which was held at the Double Tree Times Square during that same time, emphasized the need for optimism.

Heidi Martucci, who showed the Martucci Roma cashmere collection from Umbria, Italy, at the Essex House for the first time, has until now largely focused on the European market but is now trying to build up her U.S. client base. With an increasing number of shoppers trying to be more discreet about their purchases, they are less inclined to buy big-name styles that are more easily recognized by their peers, Martucci said.

Nicolas Goetschel, director of sales and marketing for Algo of Switzerland, said, “In general, the situation is bad. People are afraid of fashion-forward items.”

He, too, noted that those who are shopping are more inclined to buy items that are not immediately recognizable or readily available in department stores. “That is a positive thing for us because we only work with specialty stores,” he said.

Algo is focusing more on trunk shows — so much so that the company advised new clients to host them instead of placing orders, Goetschel said. “I would love to have someone order this $1,600 cashmere jacket. But would they sell 20 of these jackets or would the client sell a few and come back after that?” he said. “At the end of the day, you have to be reasonable. Flat is better than a loss.”

Coming from Switzerland, where many citizens frown upon the country’s unemployment rate of 3.8 percent, he is puzzled that Americans are not more proactive about the economic crisis.

Linda Cunningham, who wholesales a signature collection and owns a boutique in Jacksonville, Fla., and another in Houston, said stores seem to have adopted a cautionary mode of operation. As a result, show orders were 10 to 15 percent lower than last year.

Kevan Hall’s sales director Jeffrey Moss described retailers as “more cautious and selective” than previous seasons, and said orders were 50 percent off compared with last year. With the number of black-tie events on the wane, retailers were more interested in short dresses.

To try to entice them, Kevan Hall lowered its opening price point to $550 from $650. Kevan Hall will introduce a bridal collection in April, while trying to build its eveningwear and mother-of-the-bride offerings in bridal specialty stores.

Mimi Robinson, who has owned Mimi’s since 1978, said The Big Easy hasn’t had the highs and lows that New York, Los Angeles and San Francisco have. “We had our bust with Katrina,” she said. “Our business is just as good as it was last year so far.”

She is banking on annual sales to match last year’s, due partly to a greater emphasis on trunk shows. Kevan Hall, David Goodman and Algo were among the trunk shows Mimi’s has lined up. All in all, she was impressed with the assortment, especially the “great lightweight fabrics” and the color range. “Designers are getting it. They know customers are just not going to wear these costumes,” she said.

Another Essex House shopper, David Schwartz, vice president of Sophy Curson, a Philadelphia boutique, said he did not leave a lot of paper at the show in order to have more time to mull them over. Mark Heister, Catherine Regehr and Kevan Hall were among the show resources that appealed to him. “I’m buying very carefully. It has to thrill you, be supersexy or very colorful to sell.”

As more specialty stores pull back on inventory, customers have to understand they can’t always walk into a store and get exactly what they want immediately, Schwartz said. “There will be a lot more special orders. That will become more of the norm,” said Schwartz, who expects Sophy Carson’s sales to be 20 to 25 percent off compared with last year.

Another show resource, Guido Lombardi, which is being offered in the U.S. for the first time, picked up six new accounts, according to Gloria Gelfand, whose marketing company is helping with its introduction. Made in Italy, the knitwear collection was well received for its graphic stitch coat at $449. An ivory sweater coat at $225 was also popular, she said.

Gelfand said she expects first-year wholesale volume in the U.S. to hit $1 million. The fact the contemporary market has become laden with sportswear resources has meant more conservative dressers have fewer options, she said.

Sonja Marohn, another new line at Atelier, also generated interest, according to Kathleen Fresko, whose East Hampton, N.Y., business KEF represents the label. Aside from the fact retailers were searching for new ideas and concepts, “people were up. They aren’t about to just stand still. They wanted color, too. We still sold plenty of gray and black, but they wanted something that would lift customers psychologically.”