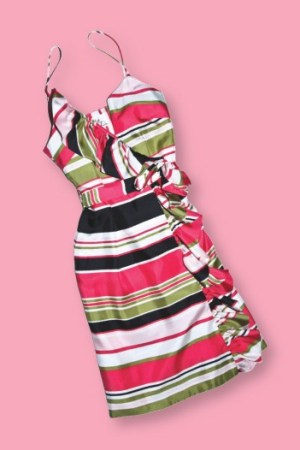 Featuring high-end contemporary designs, from denim to jewelry and handbags, Intermezzo offered a surprise after a difficult 2009, with heavier traffic and greater retail interest, according to ENK chairman Elyse Kroll.

“Intermezzo was busier than expected,” Kroll said. “Retailers were happy and seemingly less cautious than in seasons past.”

Kroll noted they were also “placing larger orders, buying new product as well as inventory for immediate delivery and were very enthusiastic about consumer spending.” While Kroll would not comment on the specific numbers of the show, which ran Jan. 5 to 7 at the Show Piers in Manhattan, she added that, during last year’s three Intermezzo shows, many exhibitors had downsized their spaces. “However, ENK has begun to see larger booths, signaling that designers-manufacturers were feeling more comfortable about business.”

While the feeling was certainly more upbeat, exhibitors noted business at the trade show has still not bounced back to pre-recession numbers. “Foot traffic was quiet,” said Courtney Burton, a representative for Milly. “We saw all the accounts we had made appointments with, but did not have as many new accounts stop in.” Nevertheless, orders for Milly, which showcased jewel tones and bold patterns this season, were up slightly from 2009. “Our customers are happy to see that prices have remained constant,” Burton said. “We just do not have a lot of stock to reorder from.”

For Susan Denner Lee, designer and owner of Sunner, establishing new accounts from Intermezzo was more difficult this year, though she felt that general interest in the line had increased. “We have expanded our brand to include Sunner Shirt and added greater assortment to the Sunner line, so our customers have more choice and diversity, which favors larger orders,” said Denner Lee. The collection’s wholesale price also has dropped about 25 percent since prior to the recession (prices range from $75 to $150).

As with other designers who are emphasizing accessibility to buyers, Denner Lee is producing more often, as well, showing merchandise on a monthly delivery basis. As for the importance of Intermezzo, which remains one of the more popular trade shows, Denner Lee noted that even among major contemporary brands such as C&C and J Brand, there are perks for smaller companies at the show. “Come the February and September Coteries, we can get swallowed up in the mix,” she said. “Another great benefit is that we can capture orders from stores who are maybe unsure of buying so far in advance, and feel more comfortable writing closer to the delivery.”