It marks the 12-year-old designer's first launch into retail after selling online for three years. 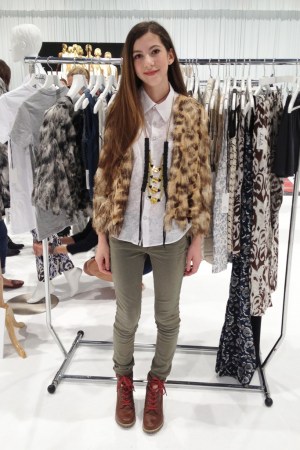 Although the details of the pieces that Nordstrom is putting in its doors are still being worked out, Taylor estimated that about 15, priced largely from $20 to $100 at retail, would enter the department store’s BP sections. Nordstrom represents Isabella Rose Taylor’s first launch into retail after selling online for three years.

Isabella Rose Taylor’s selection for Nordstrom will follow the design aesthetic Taylor has honed during her short design career. She described her pieces as grungy and hippie, while simultaneously feminine — a design recipe that has informed her spring collection, which includes crochet pants, kimono jackets, jumpsuits, crop tops, skate dresses and T-shirts.

Talking at WWDMAGIC’s Emerging Designer Showcase last week about the young girls who gravitate to Isabella Rose Taylor, she said her customer mixes “a lot of different vibes. She doesn’t know exactly what her style is. She is playing with feminine elements, but also keeping a grungy vibe. That’s what my customer really wants.”

“Isabella has the unique ability to create fun, stylish clothes that really represent her customer, who are also her peers,” Jackson said.

Fashion design is an extension of Taylor’s artistic pursuits that started with painting, and the tween’s paintings have been shown at 02 Gallery in Austin, Tex., her hometown, and Kristy Stubbs Gallery in Dallas, where they sold out in a few months.

“My clothes are inspired not only by my art, but by colors, shapes, poetry, travel and the beauty of everything around me,” said Taylor.

Taylor’s precociousness isn’t limited to art and fashion design. She is a freshman in college at an age when most girls are in junior high school. “I’m in my second semester. I’m going to our [local] community college [Austin Community College]. Most people think I’m older. I don’t really tell them I’m not unless they ask, and then they are really surprised,” she said.

Praising her parents’ support, Taylor said they have invested a lot into getting her brand off the ground, although she didn’t know exactly how much they have shelled out. Taylor did suggest she’s not going to pay them back, at least any time soon. She said money earned from sales of Isabella Rose Taylor clothes “goes back into the business” rather than to her parents or to her allowance.