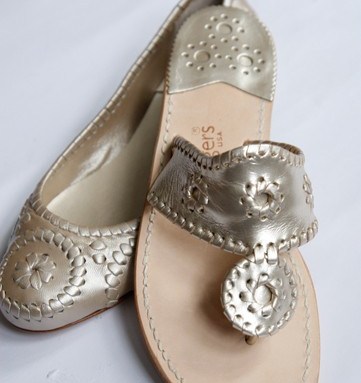 Jack Rogers, essentially a one-note fashion story with its widely popular, oft-copied Navajo sandal, is about to be blown out into a lifestyle brand.

Global Reach Capital last November quietly bought the brand from Miami-based JMR Management, manufacturer of Jack Rogers, and has formed a team of merchants, designers, production, marketing, financial and sales personnel to roll out new Jack Rogers products and categories. On the drawing board: sportswear, dresses, handbags, shoes, boots and a wider selection of sandals, and the first Jack Rogers retail stores, for the upcoming resort and spring seasons. Global Reach is partnering with the Peter Marcus Group on shoe manufacturing, with Modco, a branding company helping with the visual presentation, and with JMR, which continues to be a key supplier.

“Three years ago we formed Global Reach Capital to invest in great brands. Jack Rogers has been on our radar since the beginning,” said William M. Smith, managing partner of Global Reach, chairman of Jack Rogers and former president of Financo.

He wouldn’t disclose the purchase price for the brand, which has an estimated volume between $10 million and $12 million. “There are more dollars set aside to build the brand than we paid for it,” Smith said. “If in five years we don’t do 10 times the volume, we are going to be very disappointed.”

Denise Johnston, the former Liz Claiborne group president and president of Gap men’s, women’s and adult accessories, has been named Jack Rogers chief executive officer. She said Jack Rogers shops in the 1,000-square-foot range are being planned, with the first expected to open around February 2010 in Manhattan, followed by units in the Hamptons, and Palm Beach or Bal Harbour, Fla.

Others on the team are Jarlath Mellett, formerly at Theory and Brooks Bros., who has been named creative design director of women’s and men’s apparel; Fiona Kotur Marin, founder of Kotur handbags and a founding partner in Tory Burch, who is creative design director for handbags, and Lauren Dupont, a former Polo Ralph Lauren accessories designer and senior fashion editor at Vogue, who is advising creative director for footwear, accessories and jewelry.

In an interview at the Madison Avenue offices of Global Reach, Smith and Johnston presented the case for creating a new business model for the 50-year old Jack Rogers brand, even at a time when consumers are saving more than spending, and most brands are just looking to survive the recession, let alone ramp up. “The contemporary market is very crowded, but we see an opportunity to bring in something wildly aspirational at a better price point,” Smith said. “We think the marketplace is always looking for fresh ideas and new brands and especially open to this type of offering.”

With consumers increasingly price- and value-conscious, “everybody in retailing is looking at a good, better and best pricing matrix,” Johnston observed. “We’re positioning Jack Rogers for high-end department stores, at the good price point. But we will have product looking more expensive than it is,” and priced about 40 percent under competing contemporary labels such as Vince, Rebecca Taylor, Diane von Furstenberg and Trina Turk.

Smith and Johnston stressed Jack Rogers has a cross-generational, affluent following that will be curious to see how the Jack Rogers sandal translates into apparel and accessories. According to Johnston, it won’t be a tightly coordinated collection but rather one with pieces that reference the casual chic styling of the sandal. In resort towns like East Hampton and Nantucket, the Jack Rogers Navajo sandal has for decades been as much a part of the scene as tennis skirts and tunics. In the Sixties, the sandal was popularized by Jackie Kennedy.

“It’s probably the most recognized sandal in the world,” Johnston said.

The Navajo style comes in several colors and skins, is whipped stitched and handmade with seven strips of leather comprising the heel. The sandal represents about 90 percent of the volume.

Nordstrom, Lord & Taylor and over 400 independent boutiques sell Jack Rogers, though the game plan is to broaden the distribution with a flurry of new products to Saks Fifth Avenue, Neiman Marcus, Bergdorf Goodman and other stores. Trousers, priced at retail at $170; cotton sundresses, $168 to $200; woven dress shirts, $148, and closed-toe shoes, generally $129 to $189, are among the items being offered. There will be also be some handmade, detailed ballet flats and items in more expensive skins, priced at $225. Shorts, T-shirts, purses, totes, clutches, jelly sandals, driving shoes, boots and moccasins are also being designed.

Global Reach also has a stake in Tory Burch and other companies. Christopher Burch, the ex-husband of Tory Burch, is an operating partner at Global Reach.