The Oscar winner and former “American Idol” contestant is introducing a 14-item collection in September. 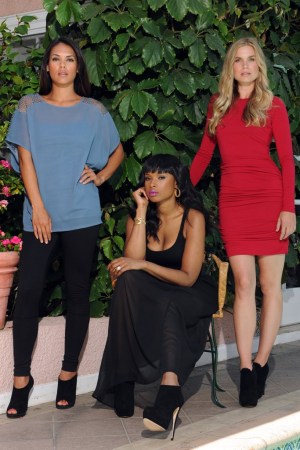 BEVERLY HILLS — After catching the public’s attention on “American Idol” and winning an Oscar for “Dreamgirls,” Jennifer Hudson is returning to TV — as QVC’s next celebrity designer.

This story first appeared in the June 19, 2012 issue of WWD. Subscribe Today.

Professing a lifelong fascination with fashion that started with youthful T-shirt cut-ups and culminated in the wedding dress she designed for her upcoming nuptials to Harvard-educated lawyer-turned-pro wrestler David Otunga, the 30-year-old entertainer is introducing the Jennifer Hudson Collection for QVC in September. Hudson, who shed 80 pounds as a celebrity spokeswoman for Weight Watchers, said she is designing not only for her former size-16 persona but also for her new size-6 body — and all the fans who span that range.

“I feel like I represent every woman,” Hudson said before a photo shoot held here earlier this month at the Beverly Hills Hotel. “I’ve been on both sides of the fence. I’ve been a big girl and now whatever this is, the average size, whatever you want to call it. But I wanted the clothes to be where any girl could wear it — no matter what size you are — and you could feel comfortable in it.”

Hudson’s personal and professional transformation appealed to QVC executives, who, in turn, hope it will be an allure to the West Chester, Pa.-based company’s customers.

“She has this great Cinderella story, an aspiration for different women,” said Doug Howe, QVC’s executive vice president of merchandising, planning and sales.

Broadcasting to nearly 100 million homes, QVC downplays that it wants to reach any specific market.

“We don’t overtly go out to target someone who is Hispanic or African-American,” Howe said. “We never look at it that way. It all starts with the person’s story and product. That dictates who buys it.”

Still, Hudson is among QVC’s highest profile stars — if not the sole Oscar and Grammy winner — selling on the TV shopping network. She is the latest celebrity to join Nicole Richie, the Kardashians, Rachel Zoe, Heidi Klum, Lisa Rinna and Joan Rivers to collaborate on fashion and accessories sold exclusively on QVC.

Not to be outdone, QVC’s archrival, Saint Petersburg, Fla.-based HSN, has linked to a slew of famous faces for partnerships in fashion, beauty and accessories, including Mariah Carey, Mary J. Blige, Iman, Serena Williams, Tori Spelling, Susan Lucci and Twiggy. Of those, the first four are noteworthy celebrities in the African-American community. HSN also carries Carol’s Daughter, which dubs itself a “poly-ethnic” beauty brand.

Hudson said she could play a role in drawing the multicultural market as well as fans of film and music to QVC. “I do think it will bring that in,” she said. “I’m looking forward to see that happen.”

For her very first fashion design venture, Hudson translated her personal preference for subtle earth tones and comfortable clothes that elongate the silhouette and flatter the figure into 14 items that can be dressed up or down. She swears that every single piece is something she would wear herself. “It has to be true to me,” she said, tapping her chest for emphasis. “I would not sign off on it if I would not wear it.”

Take the $50 pull-on ponte leggings that she jazzed up for QVC with trapunto quilting covering the knees. “I’m the legging queen,” she said, confessing that she owns 300 pairs. “What I love about a legging is, again, it’s a piece you can dress up or down and it’s still comfortable.”

Born, raised and still residing in Chicago, she dutifully added coats for her cold-weather neighbors. Of a charcoal gray coat that hugs the torso with slimming seams before flaring out into a full skirt — her most expensive item, priced at $170 — she said, “It’s cut like a dress. It’s very structured [and] very classic.”

Then there’s her love of pockets, evident in hand hideaways in a $75 sheer maxiskirt with a short, discreet lining. “My favorite thing is the pockets,” she said, rising from her hotel bungalow’s sofa to show how the skirt lengthens her svelte 5-foot, 9-inch frame. “You throw a heel on and you have legs that look like days long.”

Hudson’s experience doing the step-and-repeat on the red carpet in looks by Givenchy, Roberto Cavalli and other designer labels also contributed to a $74.50 body-hugging knit dress accentuated with ruching on the sides and a lace inset in the back. “For the average woman, we can tell them they can dress like an Oscar winner,” she said. “How about that?”

To promote her inaugural collection, Hudson will participate in a one-hour premiere on the network on Sept. 10. She is scheduled to return to QVC with new styles in November and December.

Being onstage for QVC will be nothing new to Hudson, who started her singing career at age 7 in her church’s choir in Chicago. Though she didn’t win the title of “American Idol” in 2004, she received both an Oscar and Golden Globe in 2007 for her portrayal of soul singer Effie White in the musical “Dreamgirls” costarring Jamie Foxx and Beyoncé Knowles. Two years later, she won the Grammy for best R&B album for her self-titled debut, which sold 867,000 copies, according to Nielsen SoundScan. Last year, she released her sophomore album, “I Remember Me,” which Nielsen SoundScan said has sold 441,000 copies to date.

After writing a bonus song called “Stand Up” for her first album and penning the title track for “I Remember Me,” Hudson plans to also write on her third album. “I’ve learned so much, and I feel I’ve grown a lot,” she said, having survived the brutal 2008 murders of her mother, brother and nephew. “I just want to show my growth as an artist and as a musician, not only as a vocalist but as a writer and everything else.”

As if she’s not busy enough designing clothes, making an album and raising her two-year-old son with Otunga, Hudson starts filming two movies back to back this month. In “Lullaby,” costarring Amy Adams and Garrett Hedlund, she plays a no-nonsense nurse who tends to a cancer patient and his estranged daughter and son. Then, in “The Inevitable Defeat of Mister and Pete,” directed by George Tillman Jr., she portrays a single mom who is a heroin addict and leaves her child to fend for himself, a role “which should be quite challenging, but I’m so excited to do it,” she said.

Hudson welcomes more opportunities in the future. Some of her dream projects include making customized jewelry, introducing a fragrance and creating a skin care line that she wants to call Butter.

“Everything that is in the glam world, I have a love for, especially makeup and clothing,” she said. “I don’t believe in limits.”