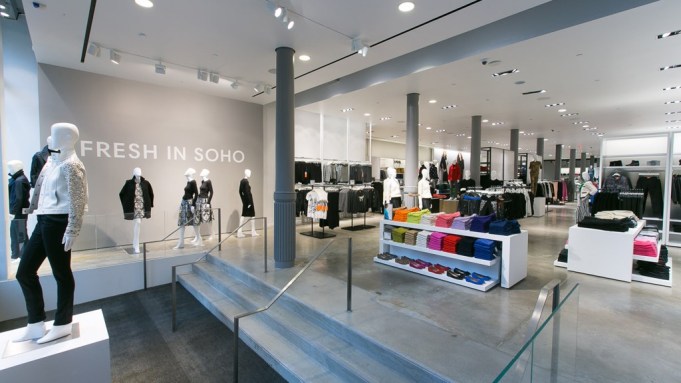 In a new international strategy that’s anything but timid, the brand has signed three separate partnership agreements to swiftly enter the Middle East, North Africa, Europe and South Korea, a total of 24 countries. In addition, “We are speaking to 10 or 12 [potential] partners all over the globe and hope to announce two or three more partnerships in the coming months,” Mario Grauso, chief operating officer of Joe Fresh, told WWD. “There’s a big corporate focus to make this business global.”

There’s also “an emerging middle class in many of these countries presenting an opportunity in this value segment, which we play in,” added Joseph Mimran, president of Joseph Mimran & Associates and founder and creative director of Joe Fresh.

How far and fast Joe Fresh can export its colorful, modern styling and downtown attitude remains to be seen, but the intent is to ramp up quickly. The first store will open in Seoul this spring, followed by one in the Middle East and then another in Seoul. New executives have been hired, including Alixe Boyer as senior vice president of brand development and Steven Horn as vice president of global retail. The company is recruiting several senior designers, and developing a kids-only store format to accommodate an assortment extending from baby and toddler sizes to girls and boys. The format is seen launching first overseas.

Last October, Grauso joined Joe Fresh from Vera Wang, to take the business to the next level.

“It’s always advantageous to get the units up and running” Grauso said, expressing a determination to open overseas units relatively fast to increase leverage with suppliers and build gross margin. Mimran echoed the sentiment: “As we add partners, it gives us more scale and more ability to drive the assortment and drive the brand imaging.”

Overseas, Joe Fresh will compete most directly against Gap, H&M, Zara, Uniqlo, Mango and Topshop, which have established global footprints. “Keep in mind, we have men’s, women’s, children’s, shoes, accessories and cosmetics,” Grauso said. “We truly have a deep breadth of product available. We even have a women’s activewear line. To be a well-assorted competitor is also key.”

Fawaz A. Alhokair & Co., based in Riyadh, Saudi Arabia, is the partner for the Joe Fresh expansion in Saudi Arabia, Jordan, Lebanon, Egypt, Morocco, Algeria, Macedonia, Montenegro, Croatia, Bosnia, Kazakhstan, Azerbaijan, Georgia, Belarus, Armenia, Serbia and Spain. Alhokair has agreed to open at least 96 Joe Fresh freestanding stores by 2018, including 40 in Saudi Arabia, with the first stores opening this summer.

Joe Fresh also signed with the Dubai-based Retail Arabia International, which will open stores for the brand in the United Arab Emirates, Kuwait, Qatar, Bahrain, Oman and Iran. The agreement is for 18 stores by 2018 including nine in the UAE. The first stores are seen opening this year, though the timing was not specified. Nabil Daud, ceo of Retail Arabia, said Joe Fresh is an important addition to the portfolio, which includes Oscar de la Renta, House of Fraser, David Morris, Hamleys and Pretty Ballerinas.

The third partner is Origin & Co. Ltd., based in Seoul. Origin plans to open up to 30 Joe Fresh locations over five years, beginning this spring with a store in the Lotte World Mall, to be followed by a flagship in Seoul. “We believe Joe Fresh is ideally positioned for South Korea, a fashion-conscious market highly receptive to smart, classic design that is well priced and well executed,” said Sungho Chung, director of domestic enterprise at Origin, a division of the ILJIN Group. Korea will see a mix of freestanding stores and shops-in-shop.

According to Mimran and Grauso, not much has to change with the collection or store presentation to sell in different countries. In certain countries, “We may need some additional sizing. It’s just a matter of grading up or down, not creating new patterns,” Mimran said. He also said the company will be sensitive to seasonality, which, for example, implies adding lighter-weight products to winter assortments, as Joe Fresh does for J.C. Penney, which sells the brand in 650 locations.

“A lot of J.C. Penney’s southern doors have been very interested in making sure the assortment is always right for warm weather doors. We will use the same criteria for the Middle East,” Mimran said.

The Joe Fresh store opened in New York’s SoHo last year is the template for overseas units. Overseas stores, Grauso noted, “will be close to exactly what we are doing in Canada and the U.S.”

The overseas partners will build and own the Joe Fresh stores and function as wholesale accounts purchasing the Joe Fresh product. They also operate e-commerce sites to sell brands in their regions. Joe Fresh only operates e-commerce in Canada and is planning e-commerce for the U.S. this fall.

A team to monitor the overseas stores is being formed. “We have visual standards that have to be adhered to” and a look that Mimran feels is “very clean, unique and not overloaded with merchandise” representing an upscale approach to presenting less expensive goods.

Currently, Joe Fresh only has stores in North America. In Canada, there are 16 freestanding sites and 350 shops-in-shop in Loblaws, the publicly held supermarket chain in which the Weston family has a large stake.

Loblaw Cos. Ltd. is the parent company of Joe Fresh.

In the U.S., there are six freestanding shops, as well as the Penney’s shops, where the presentation has changed. Penney’s said the brand was recently downsized a bit to be more in line with sales and relocated to the casual side of the floor, though still not far from its former spot by the entrance now occupied by the jcp and a.n.a. private brands. “We are very happy with that location,” Mimran said. “We are maintaining quite a lot of volume.”

Mimran sees his biggest challenge overseas as “maintaining a consistency of the branding, imaging and product, so you don’t give out mixed messages internationally and lose focus as a brand. You can get pulled in many different directions depending on a country’s needs and weather.”

Asked how big the international fleet could be, Grauso replied, “It’s hard to put a number on it, not knowing how fast we will grow, but I think it will be a substantial number.” He said the Middle East will have upwards of 130 to 135 stores while South Korea will be in the range of 35 doors.

“This is the right time for Joe Fresh to expand onto the international stage, building on the success it has realized in Canada with a solid history of growth and the confidence of our customers,” said Galen G. Weston, executive chairman of Loblaw Cos. “Teaming up with our new international partners is an attractive model for the business that I believe leverages our complementary strengths.”