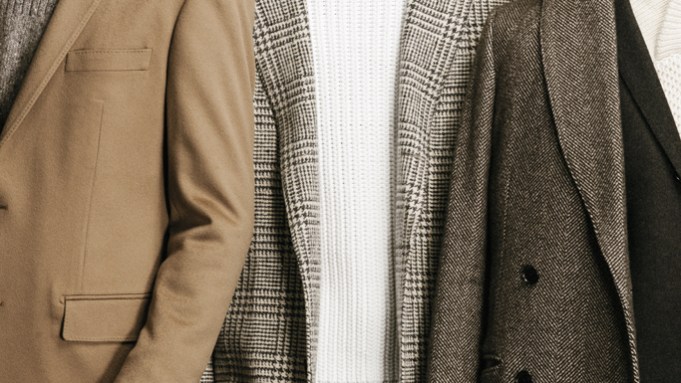 John Mehas has been chief executive officer of Club Monaco for more than 12 years.

It’s intentional that he has kept a low profile since joining the retailer from The Gap in 2000.

“For me, it’s all about the store and what we create, not the personality,” Mehas said during an interview.

Although he’s personally elusive, his impact on the 64-unit chain speaks volumes. When he started, Club Monaco was “all chinos and T-shirts,” he said over coffee and a croissant at the Gansevoort Market, one of his favorite New York City haunts. “Now, it’s affordable urban luxury.”

The company’s on-trend mix of apparel and accessories, combined with its out-of-the-box merchandising strategies that include coffee shops, bookstores and whiskey bars, is helping Club Monaco put heat on its specialty store competitors. J. Crew last month reported a net loss of $30.6 million in the fourth quarter ended Jan. 31 due in part to slowing sales in women’s wear and increased markdowns. Banana Republic posted flat comparable-store sales during 2014.

Plus, ferreting out concrete financial details about Club Monaco is next to impossible. Ralph Lauren Corp., which purchased the retailer for $52.5 million in 1999, is notoriously tight-lipped about the company that was founded in Canada in 1985 by Joe Mimran — who would go on to found fashion retailer Joe Fresh. In Lauren’s 2014 annual report, the only mention of Club Monaco was to give the store count — 119 concession shops in addition to the 64 company-owned stores in North America and Europe — and say that it “designs and markets its own clothing and accessories for men and women, offering key fashion pieces with modern, urban sophistication and a selection of updated classics.”

Asked for a comment about the company’s performance and its place within the larger corporation, Christopher H. Peterson, president of Global Brands at Ralph Lauren Corp., said, “Club Monaco product is resonating well with consumers around the world.” He said the business has a very strong position in the U.S., Canada and China.

Jackwyn Nemerov, president and chief operating officer of Ralph Lauren Corp., said on the recent fourth-quarter earnings call that Club Monaco is operated as “a separate brand. The front of the house functions distinctly, while the back of the house is linked into [the back-office platform].”

Analyst comments about Club Monaco are also rare, except for one report from Wells Fargo Securities in February that said the business had sales of $165 million in 2014 and a solid operating margin rate of 10 percent. The margin figure is lower than Ralph Lauren’s midtier brands (Polo, Lauren, Denim & Supply at 14.9 percent) and lower-end (Chaps at 11 percent), Wells Fargo said, but better than the 5 percent margin generated by its luxury businesses.

For Mehas, who declined to discuss financials, Club Monaco’s small size is part of what gives the company an advantage. “We only have 30 stores in America, which is a tiny footprint,” he said.

Instead of subscribing to the old-fashioned notion of opening 3,000- to 5,000-square-foot stores in every mall in the country, Club Monaco has chosen a different strategy.

Since opening its first “lifestyle” store in New York’s Flatiron District in 2013, most new stores are street locations in unique or historic locations. They range in size from 500 to 5,000 square feet. For instance, a men’s-only store in a century-old bookstore in Montreal still sells books and has a bakery, and the Southampton, N.Y., unit is merchandised with flea-market finds — all of which are for sale.

When the company opens its newest unit on Bloor Street in Toronto this summer, it will create a farmer’s market in the store that will operate year-round. The newly opened Chiltern Street store in London has a café in the rear and is serving American whiskey as well, and a shop in South Korea will offer the company’s first-ever men’s grooming station.

Perhaps its most innovative idea came in February when Club Monaco installed a pop-up boutique inside Noma, a top restaurant in Copenhagen, offering men’s and women’s apparel, accessories, vintage and home pieces, books, coffee and wine.

“We’re inspired by architecture, art, photography and food. They all play off of each other,” Mehas said. “And we take a very bespoke approach. We study the design of the buildings and bring them back to what they used to be.

“For me, it’s not about the clothes, but the environment and the extensions,” he added. “All the stores are artisanal and different and we partner with the local communities.”

That being said, Club Monaco is still first and foremost an apparel retailer, and Mehas works closely with men’s designer Aaron Levine and women’s designer Caroline Belhumeur to ensure the fashion is on target.

The retailer also has a program it calls Makers & Muse where it partners with third-party brands such as Lardini, an Italian tailored clothing manufacturer, to bring “the most inspiring product” and “an elevated assortment” to the stores. Other brands that have participated in this series include Lotuff and Allen Edmonds.

Prices can be significantly higher on this product. For instance, a Lardini reversible trench retails for $1,000, while a Club Monaco bonded trench will sell for $389.

He said he believes the men who had embraced Club Monaco for chinos and T-shirts in the early days have grown up and are now buying sportswear and tailored looks to wear to work.

“People shop high and low today,” the ceo said. “Mass to couture and everything in between. It’s very mixed.”

Rampant price promotions are also not part of the equation.

“You can’t be inexpensive enough and you can’t win solely on price,” he said. “Where you can win is on creativity, brand DNA and storytelling.”

In general, Club Monaco targets a 25-to-40-year-old and its sales are around one-third men’s wear to two-thirds women’s. But Mehas sees men’s as a major growth area.

“In some countries, men’s is almost 50 percent of the business,” he said. “And almost 40 percent of the stores we’re opening over the next two years will be men’s stores.”

Mehas said beyond men’s, growth plans for the future include expansion in Asia, Europe and North America.

“We’re excited about our opportunities in Europe. We just opened our fourth store in London and we’ll be opening soon in Paris,” he said.

E-commerce is also seen as an opportunity. “We’ve made inroads online, but there’s more progress to be made. You’ll see a dramatic difference on the Web over the next year with more storytelling versus just selling clothes.”

So where does Mehas see Club Monaco in five years? He shook his head, saying he couldn’t predict the future. “We’re in home, books, coffee, flowers, liquor and haircutting salons. We have third-party representation and an eclectic store model. Five years ago I never would have articulated that, so the opportunity is there to dramatically evolve the brand and take it to the next level through further extension of the lifestyle.”