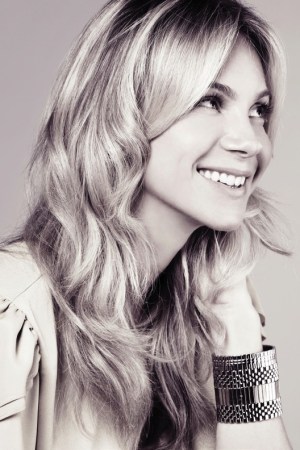 LOS ANGELES — Joyce Azria has exited her post as creative director of BCBGeneration, the brand founded by her father Max Azria, to launch her own line, a contemporary brand aimed at Millennial women called Avec Les Filles.

Joyce Azria, 35, began her fashion career designing swimwear for BCBG right out of college, and has been creative director of its young contemporary brand, known as “Generation,” since 2009. In May, she decided it was time to leave the family nest and branch out on her own. The timing was certainly right; in March, her father left the role of chief executive officer as BCBGMaxAzria Group’s majority stakeholder Guggenheim Partners took financial control of the company that Azria founded 30 years ago. Her stepmother, Lubov, is still creative director of the BCBG and Hervé Leger brands.

“Everything was changing,” Azria said. “I had been super happy running Generation and seeing it grow, but it was very much from behind the veil of my father’s company. It was time to take a more primary role in my own brand.”

Funded by non-family member, private equity investors, Avec Les Filles, meaning “with the girls” in French, provides Azria with a new platform to be the friendly fashion adviser for the Millennial fashion customer. It also combines the current vogue for French-inspired fashion (think Zadig & Voltaire, Sandro, Maje and Joie, the latter of which is owned by her uncle, Serge, and all of which take a page from BCBG’s French twist on fashion) and designer-led brands, where customers can identify with the actual person designing the products.

Avec Les Filles’ spring 2017 line will debut at Los Angeles market this week with a stable of accessories licenses, from shoes, bags and hosiery to hats, scarves and belts, even fine jewelry.

“Most brands aimed at Millennials start around price, but we know that girls shop up for accessories. She can buy Chanel off Tradesy and get her clothes at Target. She’ll figure out a way to afford that Rebecca Minkoff bag,” Azria said.

She is savvy to the quickly changing shopping habits of young women, as well as the retail world’s need for new business models. Her line ranges in price from $18 up to $600 because “girls shop high and low, and retailers can decide where certain products work for them.”

The higher range of product includes aspirational leather bags, shoes and jackets, as well as fine jewelry, which young women are also starting to self-purchase. “It’s been exciting to build a brand that is in sync with the pace of the actual customer. It’s disruptive on a large scale,” she said.

Indeed, her years at BCBG and her connections in the Los Angeles apparel manufacturing world have enabled her to form high-level licensing and wholesale partnerships. The forthcoming apparel collection, launching with a web site in November, will be produced in-house and launch with one major retailer, to be revealed soon.

“The trend of a celebrity-driven brand is waning. Millennials want a real connection with a designer-led brand, not actors or singers who have had other mediums for success,” Azria said.

She also has a forthcoming book espousing her own Millennial “moral code” on family, fashion and food. A mother of three boys and two girls, she’s an avid foodie who enjoys sharing her latest discoveries on Instagram. She also touts her entrepreneurial friends including Clique Media Group’s Katherine Power and Hello Giggles cofounder Sophia Rossi as her support network.

As for her high-profile family, Azria said she’s proud of her “garmento” roots. “When people say, ‘Aren’t you worried people will think you got this far because of your family?’ I say, ‘I did. They taught me everything.’ My parents are still sounding boards. I go to my uncle with every investor question. They are part of everything I do, but I had to take this one alone.”

Her most important lesson still comes from her dad.

“He always said ‘In fashion if you’re not going to take a risk, then you are dead before you’ve started.’ When he started BCBG there was only juniors and misses’. He took a risk creating contemporary clothes. Now women are informed and want the best product at the best price and they will get it wherever they find it — online or in store. The old doesn’t work anymore, everyone wants a change. I’m excited to break down the walls and see where this takes us.”