The sisters were holding court at the Dorchester to launch their Kardashian Kollection to British press. 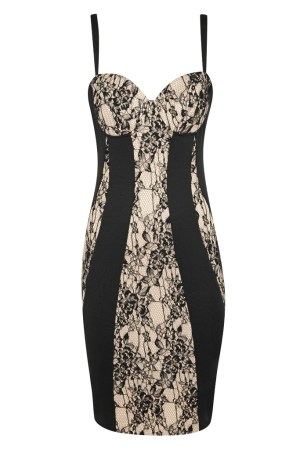 The collection, which is produced in partnership with Bruno Schiavi, president of Jupi Corp., launches today in more than 200 Dorothy Perkins stores across the U.K. and on dorothyperkins.com. There are 100 pieces in the collection, including several handbag and clutch styles, with prices ranging from 12 pounds to 75 pounds, or about $19 to $120 at current exchange. Kardashian Kollection shoes and jewelry are planned to launch in 2013.

This story first appeared in the November 8, 2012 issue of WWD. Subscribe Today.

Hitting stores in time for the party season, there are several body-conscious dresses, including one with a keyhole opening at the front — Kim’s favorite piece, in leopard print. Kourtney’s favorite piece is a gold sequined dress with sleeves, but she also likes the gold sequined jacket. There are more dresses — in a mottled blue and black print and a gold foil bandage style — as well as a selection of blouses with delicate pintucking and lace inserts. Lace also appears in a trenchcoat and in a blazer.

The Kardashian Kollection for Sears was introduced by Schiavi last year and has arrived in the U.K. after its launch in Australia. “We launched in the States first and then, because I’m Australian, it was Australia,” he explained. “When I came to London looking for a partner to launch here, I just really clicked with Philip [Green]. We met and the deal was done in 24 minutes. It was the quickest deal I’ve ever done in my life.

“The girls are very hands-on. I have an office in L.A., where the girls are based, one in Australia and one in China. We meet at the beginning of the season and talk about what they have seen on the catwalks, the trends, and they’ll bring tears from magazines and show the things that inspire them. Then it’s designing and fittings. They are involved in every step. We have a fitting here in London tomorrow and we’ll Skype Khloé in for the meeting. We have a rule — if we have two yeses and just one no, it’s in.”

“I’ve been doing this for a long time and to do this well, you have to get your hands dirty. You have to get involved,” affirmed Dorothy Perkins boss Sir Philip Green, who previously worked with Kate Moss on her collections for Topshop. “I have been seriously impressed with the way these girls work. They are smart and savvy and know how to build a brand.”

“I really like seeing the figures that show what is working and what isn’t,” said Kourtney, who cited vintage clothes, films, magazines and Bianca Jagger among her inspirations. “And we’re so lucky that we live in a time when we can have so much contact with our customer though Twitter or our blog, and we really do listen to what they say.”

Kim and Kourtney — with Khloé, who is joining them in London after filming for “X Factor” — are scheduled to make an appearance at the Westfield shopping mall on Saturday to meet their fans. “Sometimes when we get to meet these girls they wear pieces from the collection that they have bought especially, and I really can’t wait to see how the London girls will style our clothes,” said Kourtney.

While he sidestepped the question of how long the Kardashian Kollection will have a home at Dorothy Perkins — “I’ve committed to a couple of seasons, we’ll see what happens after that” — WWD did establish that the girls’ interiors collection will be launching at BHS in 2013 and that Green has big plans for the sisters. “I’ve got an idea, a big idea. It’s going to blow the roof,” he said, declining to elaborate.

The Kardashian Kollection will be supported by a small level print advertising campaign, and the collection will roll out to Bahrain, Indonesia, Kuwait, Malaysia, Philippines, Qatar, Saudi Arabia, Singapore, Thailand and the United Arab Emirates within a month.