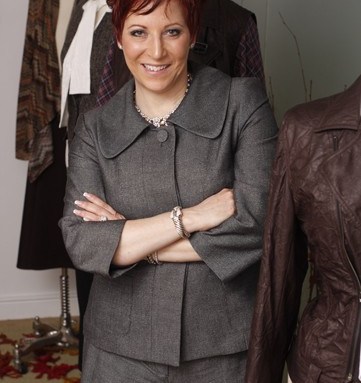 Hope Brick has been charged with a Herculean mission at Kellwood Co.: to try to return the vendor’s moderate brands to their former glory.

But Brick, chief merchandising officer of Kellwood’s Lifestyle Alliance who assumed her newly created post at the company about a year ago, has already seen improved sell-throughs on the first product she worked on this fall, despite the tough selling season.

“The moderate traditional segment of the market had gotten complacent as department stores shifted their dollars to the modern areas,” said Brick. “But the consumer spend is here — it’s just that dumpy, frumpy clothes won’t get her to open her wallet. I call what we are doing up-to-date as opposed to modern, because it comes down to fit. Our woman is attracted to the aesthetic on the modern side, but needs the traditional fit.”

Brick, a former vice president of apparel, accessories and footwear at Wal-Mart Stores Inc., said “the stakes are high” for her turnaround of Sag Harbor, Briggs New York and Koret, which have struggled for years. The three brands together make up Kellwood’s “lifestyle” division, which represents a little less than half of the now-private company’s less than $1 billion volume. Their collective revenues today are half of what they were two or three years ago, according to the company, and Brick’s job is to return the traditional misses’ businesses to their original size within the next two to three years.

After joining the St. Louis-based vendor in October 2007, Brick said she was able to partially impact the fall 2008 collections.

“When I came, fall 2008 was already in progress, and I stopped it and redirected it,” Brick said. “So far, we’re seeing our product outpace our competition from a sell-through perspective. Our rate of sale is better than it was a year ago.”

But the collections she fully directed from start to finish are just hitting stores now. And while the retail environment may be the worst in decades, Brick contends this might benefit her brands, which wholesale for an average of $13 and are sold in more than 4,000 midtier department store doors, including J.C. Penney Co. Inc., Sears Holdings Corp. and Kohl’s.

“I see this segment as a sweet spot in this type of economic environment,” Brick said. “Someone who is aspirational may look to shop down a little, and if we can ring her bell with a crinkled pleather vest for $60 instead of $160, we’ll capture her.”

In the brands’ New York showroom at 1407 Broadway, the clothes indeed look different than moderate departments of yore. One mannequin models a puffer vest with heart-stenciled tonal seaming over a striped shirt with collar and cuff detailing, while another has a ruffled plaid shirt with a sleeveless brown motorcycle jacket with a diagonal zipper.

In terms of interpreting trends for her customer, Brick said: “To me, it starts with color and fabric, then print and pattern, then silhouette. This customer is so savvy. If we underestimate her, we fail.”

Before Brick, Kellwood’s moderate brands hadn’t changed with the customer, who had grown older physically and younger mentally, the company said.

“Our customer loved our brands’ fit, quality and value for money, but there was a growing divergence between the way they wanted to look in their clothes and our styling,” said George Sokolowski, vice president of strategy and chief marketing officer. “Styling is now up to par with their feeling.”

Brick said the first task was defining and segmenting the three brands: Sag Harbor as a lifestyle label, Briggs New York as a pants-focused line, and Koret as mature “easy care, easy wear.” Each brand has a separate design team, but shares some services, including creative (which identifies macrotrends), textile design and — of course — Brick.

“They had been competing and functioning in silos,” Brick said. “Collectively, we can lead the moderate segment.”

The next step was surveying the customer base. “We design based on research and fact, not emotions or egos,” said Brick. “We found out what was most important to her: to look younger and thinner.”

Thus, for fall 2008, Brick’s team introduced the Slimming Solution technology for 30 percent of its pants, and for December shipments it added the technology to knit pieces. In terms of additional expansion, Briggs added jackets to its signature pants assortments this fall.

“If I won’t wear it, I won’t design it,” said Brick, wearing a silver Sag Harbor pant suit with a scarf draped dramatically around her neck. “I’m very passionate about women who want to be relevant but have a limited spend.”

Brick was born into the business, with a father and grandfather who had also been in the industry. She went through R.H. Macy & Co.’s training program, worked as a buyer and then became a fashion director. She served as design director of proprietary brands for May Department Stores Co. before going to Wal-Mart around 2000 to launch a New York-based design initiative spearheading the retailer’s apparel business.

Brick, 53, is married with a 21-year-old son studying at the Fashion Institute of Technology and a 15-year-old daughter. She just secured a home in the Los Angeles area, where Kellwood’s lifestyle brands’ back offices will move in mid-2009.

That relocation of the lifestyle brands headquarters, which was revealed last month, is the most recent of the changes Brick has experienced since she joined the firm, when it was still a public company doing $2 billion in sales. During her 14-month tenure, the company went from public to private when it was bought by Sun Capital Partners Inc.; got a new chief executive, with Abercrombie & Fitch chief financial officer Michael Kramer replacing Robert C. Skinner Jr. last summer in the top post, and halved its size, as the firm broke off assets that did not fit in with its focus on women’s apparel.

But Brick said her work has been relatively unaffected by all the changes. Currently based in New York, Brick reports to both Kramer and Kellwood West ceo Arthur Gordon.

“From day one, my focus has been on the product,” Brick said. “Yes, we went from being a public company to a private company, but I don’t feel impacted by that. The acquisition has been a very good thing, infusing us with capital and giving us an edge over our competition. We have the resources and the tools, and I feel very supported by Mike Kramer. I just focus on the product and take it two seasons at a time.”