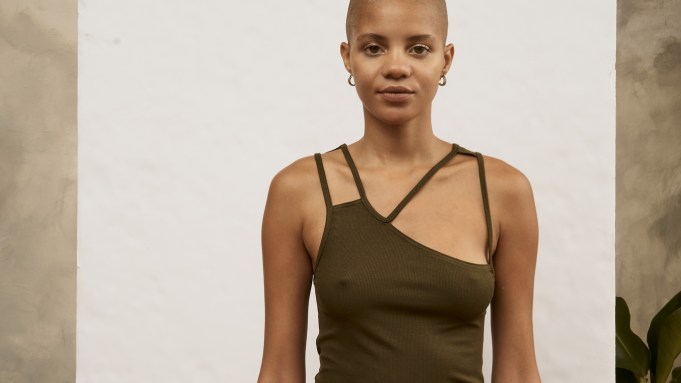 During this tumultuous year, it may seem unusual for any brand to launch, especially one firmly centered on Black, trans and queer bodies in its vision. Enter New York-based Black queer femme designer Kingsley Gbadegesin, who wants his debut line K.ngsley to not only serve his community with a range of appealing gender nonconforming tank tops, but also as a vehicle to uplift and give back to these communities in an authentic way.

Authenticity, in fact, has been a struggle for brands making symbolic gestures of solidarity without having a company culture that truly reflects diversity. Not so for Gbadegesin, 27, who has a background in the ballroom scene and a philanthropic organization On the Ground, which has helped organize candle vigils and support protesters at various demonstrations for the Black Lives Matter movement.

Gbadegesin isn’t new to the fashion world, either. He’s held marketing and wholesale roles at Versace, Celine and Loewe, and counts Stacie Henderson, a member of the CFDA’s Black advisory board, as a mentor.

“The real reason why I started or launched this brand was through activism,” he said. “Who I am as a person, my identity, my skin, is not a trend. For me it was this a-ha moment of: I can do this, I can build a sustainable financial system where I can give back to my community.”

The concept was born from a night out in January, where a rushed attempt to cut and create an outfit from a dirty tank top led to 20 people approaching him within 10 minutes of entering the club. The photo he posted on social media, sans face, received the most likes and was saved more than 200 times. In late May, he decided there was enough of a demand and void to launch.

And he was right. On pre-order alone, he sold out of one of four styles from the debut, BQ Essentials, which officially launched this month to celebrate the “Butch Queen (BQ)” in all of us. Priced between $180 and $195, the four styles emphasize cutouts and bare skin, and come in monochromatic navy, white, black and olive.

He’s also entering the sustainability conversation by only using leftover and discarded fabrics from other designers, which inevitably make his collections limited runs; once a style and fabrication is sold out, it’s done.

The goal, as he noted emotionally, is to celebrate Black queer trans people. “This year has been really hard for trans and femme bodies. With normalizing our story, our photos, putting us out there…if we normalize it enough, my trans and femme sisters and brothers won’t get killed. The power of representation is important. It’s super important for people to identify and see themselves.”