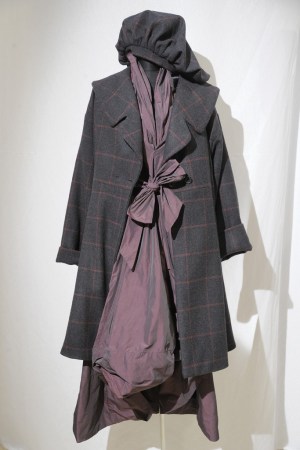 Knitwear was an especially hot item for brands experimenting with new levels of creativity at the women’s apparel shows in Paris this month.

This story first appeared in the March 26, 2013 issue of WWD. Subscribe Today.

Buyers said they were generally optimistic about sales for this year, but continued to be vigilant on pricing.

Mark Werts, founder and chief executive officer of American Rag, said he “didn’t even think about” recession. “I believe that in fashion there’s always an equal amount of opportunity,” he said, using the analogy of a balloon pressed in on one area, forced to bulge in another. The key is to keep an eye on areas where “things are booming,” outside of southern Europe and the U.S., such as Brazil, Asia and Turkey, where the chain is opening a new store in Istanbul’s Zorlu Center.

“The norm is global now,” he said, “and anyone not speaking that way has blinders on.”

At the shows, Werts noticed a Sixties “pre-hippie” trend of more structured silhouettes, and complimented Isabel Benenato for “gorgeous Italian craftsmanship,” that “seems easy,” as well as “lovely” denim washes at Johnbull at Tranoï. He also liked “beautiful fabrics and fits” from the new denim brand Koral Los Angeles at the same show.

Diana Tse, a buyer for Urban Outfitters Inc.’s Anthropologie, said, “We are very optimistic about business. We just have to stay in tune with what customers want.” She noticed skirts at the shows were “very refreshing, with unique fabrics and the shapes are very accessible.”

“The knitwear this season is really elevated like we haven’t seen in the past,” with unusual textures, while silhouettes were, “definitely longer, and there are still a lot of dresses but there are more nice separates,” she said.

Buyers for the Paris department store Galeries Lafayette gushed over the collection of “booming, in-your-eye” knitwear from Netherlands-based Furansu at Capsule.

At the show, knits were especially versatile and were often presented as alternatives to coats. Jacquardlike patterns in sweaters were also popular. Brands showed lots of larger, oversize knits, often designed to drape in form-flattering silhouettes, with drop shoulders for a slimming effect. Brands unveiled new blends of softer materials to avoid “the itch factor.”

Tweed coats seemed to be everywhere, with fur accents and attention to details, such as jewellike effects integrated into the necklines of dresses. Dresses themselves remained silky, to be worn with chunky, large coats.

Julie Budik, owner and buyer of Style Junky in Cannes, France, noticed brands were “playing it a little safe and simple, so that customers can wear it again,” with darker, basic colors for winter, and in response to the economy.

Other buyers said flexibility on order size and timing was essential for reducing risk in Europe, as well as fast delivery for replenishment.

Joanne Ford, owner of Eye On Design in Canada, said a wait-and-see ordering strategy meant “you can’t get the best stuff that way, and you need a certain level of commitment.” At Tranoï, Ford embraced the brand Transit Par-Such for “its high-end streetwear and great fabrication and fit,” plus her new discovery at Atmosphere’s, Les Filles d’Ailleurs, for its “beautiful cuts for real women, and amazing fabrication,” such as mixing taffeta with jersey and wool.

Il By Saori Komatsu, from Japan, showed large knits with fringe and fur additions, and cashmere sweaters were dyed with bright splotches of color for an unusual, painterly effect. Asys Chalemko, buyer for the Moscow store, UKStyle, said the brand’s sweaters “always fit the body perfectly. It’s one of our bestsellers. We can’t keep enough in stock.”

At Atmosphere’s, the technical urban outerwear brand Urbahia displayed sculptural coats with waterproof coating on twill for a waxy effect. The thickness and generous but light material on the high collars allow the wearer to sculpt their shape. Coats also contained kimono-reference flaps inside outer, removable layers.

At Capsule, Jourden launched its Hong Kong-based collection with unusual fabrics and textures, such as a colorful, semitransparent frill weave quilted onto thicker, lightweight fabric on boyish jackets paired with high-waisted flared skirts.

“I like the mentality of men’s wear in that you don’t jump from style to style, but invest in the basics,” said designer Mak Chung Ting.

At Designers & Agents, the Los Angeles-based brand Soyer said many of its chunkier knits were designed to be worn over blazers or jackets, so that the stiffer shoulder lines added an edgy structure to the sweaters. The mostly cashmere and Italian yarn knits could often be transformed and worn in different ways, and included unusual tucks and cutouts.

D&A organizers said attendance was up about 15 percent compared to its show a year ago, while at Paris sur Mode and Atmosphere’s, attendance was down 4 percent compared to March 2012. That figure includes a 36 percent drop in U.S. visitors, 11 percent fewer Italians, and a rise of 10 percent from the U.K., and 7 percent from Asia. North and South America accounted for 8.5 percent of foreign visitors to the shows.