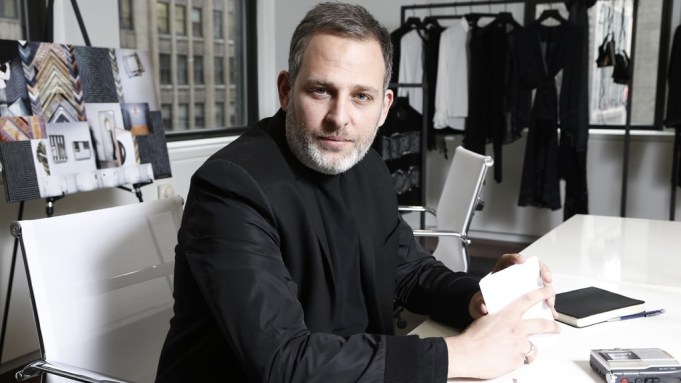 NEW YORK — Kobi Halperin is stepping out on his own.

The Israeli-born Halperin said his target customer is a woman who understands quality, loves details and isn’t trying to be a fashion victim. He described the woman he is designing for as ageless. “Age is not relevant anymore. It’s about attitude,” he said at their temporary showroom at 500 Seventh Avenue here. “She wants beautiful product and wants to look good and feel good about the way she puts things together. She likes to mix textures, she’s very feminine. In everything I’m trying to create, I always want to have a little bit of a nostalgic and romantic feeling. I’m always going back to my grandmother’s closet. That’s basically the whole inspiration.”

After graduating from Shenkar College in Tel Aviv, Halperin moved to the U.S. 16 years ago. He took his first job at Elie Tahari and rose to executive creative director, leaving in 2011. “I learned to appreciate good quality. I learned that business is first. It’s a business, it’s not a hobby, and that product comes first,” said the 42-year-old designer. After a short break, he joined Kenneth Cole in 2012, and left last fall. “It was very inspiring. I’m very passionate about accessories, and it was an amazing opportunity to learn more about accessories.”

For his namesake collection, Halperin is working with several factories in Asia. He is targeting such stores as Bergdorf Goodman, Neiman Marcus, Bloomingdale’s and Saks Fifth Avenue, working with individual retailers to go floor by floor and door by door to identify where it should be housed. “Now it’s time to change the rules. There’s contemporary, bridge and designer, and after doing this for almost 16 years, I’m allowed to rethink the system and challenge everybody on how we’re going to do it,” he said. First deliveries are slated for August. Halperin declined to divulge first year sales targets.

S. Rothschild has outerwear licensing deals with such brands as Elie Tahari, DKNY, Larry Levine, Via Spiga, Rachel Rachel Roy, Lauren Ralph Lauren, French Connection, Izod (men’s), and Sean John (men’s) for outerwear. Mark Friedman, chief executive officer of S. Rothschild, said, “The family has been in apparel our whole lives; I met Kobi eight to nine years ago when he was at Elie Tahari. Six to eight months ago, he came to me with this idea, and I introduced him to my son, Jordan [senior sourcing and production manager at S. Rothschild], and I thought it would be a good opportunity for Kobi and Jordan to tackle something that was exciting and was related to the family enterprise.” Jordan Rothschild became Halperin’s partner in the operation.

“Layers feel fresh to me, and longer skirts, jackets and vests. It’s a very bohemian feeling. That’s my woman,” he said. While the first delivery is bohemian, it gets more dressed up for October delivery. Wholesale prices range from $120 to $180 for dresses and jumpsuits; $90 to $180 for blouses, sweaters, pants and skirts; $160 to $250 for jackets; $150 to $225 for vests, and $350 to $550 for leathers, furs and coats. Key fabrics are silk georgette, tropical wool and luxe twill; lace; leather; fur; novelty yarns, and luxe jersey.