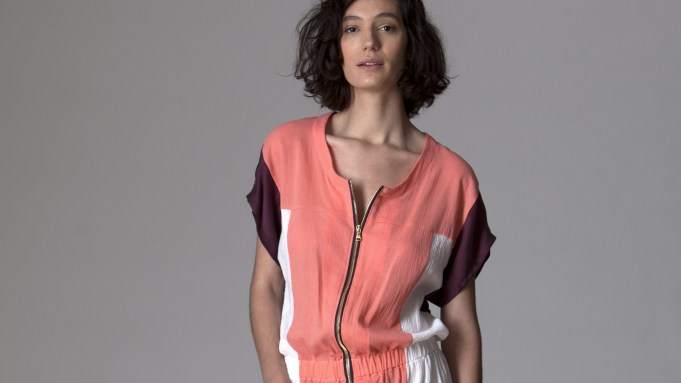 New York brand Koza is now Paradised in a name change the company’s founders think speaks to a broader group of people.

The change, which becomes official with the company’s resort 2018 collection, also mirrors an expansion in the company’s aesthetic which has branched out from its originally Turkish towel designs when it started in 2014.

“We wanted to expand beyond more than just doing Turkish towels. It’s very precise; it’s very niche,” said designer and cofounder Sinje Lesemann. “We basically introduced other fabrications and also graphic Ts and sweatshirts. We started to really find our voice and a real point of view. It’s where streetwear meets resortwear…We’re now reaching the next growth phase and thought now would be the time to do it.”

Paradised reflects a positive, spiritual place, Lesemann said. It’s also a word she said nearly anyone understands no matter what language someone may speak.

Koza, entered the market in 2014 with Lesemann and Daniela Jung, who has styled Jared Leto and Mary-Kate and Ashley Olsen, launching the ready-to-wear collection out of New York.

The company’s largest account is Net-a-porter. The line is also sold at Lane Crawford, The Webster, By George and some Saks Fifth Avenue stores.

The name change could very well help it to pick up new retail accounts, Lesemann said, including ones that perhaps skew younger or edgier in their buys.

“We sell to the younger cool girl but we also have a customer that’s maybe a woman in  her 40s and 50s, the cool mom who wears Golden Goose sneakers,” Lesemann said. “We already have that with Koza and I don’t think that’s going to shift, but I do think it will open distribution to other stores, especially now with the American scene. The specialty stores are the ones that are doing really well. Obviously, everyone knows department stores are struggling but I think now in retail it’s the age of the curators again, where the buyers create a look specifically for their clientele. It’s easier for them to understand.”

In the fall, the company expects to re-launch a web site with the Paradised name that will also function as a pop-up store with limited edition drops. It’s a deliberate move, Lesemann said allows the brand to grow through the company’s retail partners first.

Resort takes on an interesting viewpoint with inspiration drawn from the Baja 1000 desert races on the Baja Peninsula, which features a mix of off-road heats involving different vehicle classes ranging from motorcyles and trucks to Volkswagens and buggies.

“We love that eclectic power class of different styles,” Lesemann said. “It’s kind of romantic in that sense. When you look at the collection you see it loosely referenced but done in a beachy way. It’s a really weird, wonderful juxtaposition of different things.”

Paradised ranges in price from $75 for a tank top to $499 for a motorcyle jacket that incorporates mesh and silk. It’s the fusion of different materials and inspirations, Paradised owners think will work in a market undergoing rapid change.

“The fashion industry itself is changing so fast and people don’t really know what’s going on,” Lesemann said. “All of a sudden men’s wear is women’s wear. Men’s shows with women. Streetwear is luxury. It’s an interesting time right now to come out there and do something that is really unique and that really has a unique point of view.”