L.L. Bean is tending to its future with a new collection that evokes the company’s American, outdoor heritage. 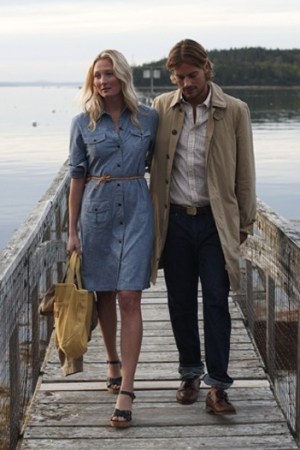 L.L. Bean is tending to its future with a new collection that, while squarely aimed at a younger and more urbane audience, evokes the company’s American, outdoor heritage.

This story first appeared in the October 13, 2009 issue of WWD. Subscribe Today.

Called L.L. Bean Signature, the line, designed by Alex Carleton, the founder of Rogues Gallery, marks the first time the Maine-based cataloguer and retailer has sought to expand beyond its core outdoor apparel and equipment business. It will debut to press Wednesday, and will hit the company’s stores and catalogue in March.

“As we looked at how to evolve and innovate the business over the last several years, we saw there was an opportunity to update the styling and fit,” said Christopher Vickers, vice president of home, kids and L.L. Bean Signature. “We are L.L. Bean and we want to continue to be L.L. Bean, but more modern.”

Just three years away from celebrating its centennial, the privately held company with $1.5 billion in annual sales, has long been a player in outdoor-equipment and active apparel, but Signature, Vickers said, translates the brand’s outdoor utilitarian style for a more citified audience. “We were really looking at a way to broaden the wearing occasions,” he said of the line, which includes men’s and women’s apparel, accessories, outerwear and footwear. “It’s still casual, but dressier than in the past and still inspired by the outdoors.”

The 200-piece collection, split evenly between men’s and women’s, is clearly indebted to Bean’s past but the line marches into new territory with items like relaxed cotton suits and washed oxford dress shirts for him, and wrap dresses and sandal cork wedges for her.

“The task was defining the future of L.L. Bean style,” said Carleton, a native of New England who designed for Abercrombie & Fitch and Polo Ralph Lauren before launching his own brand in 2002. “I wanted to have pieces that were easy and had a vintage feel but that worked in Boston as well as Bar Harbour.”

In articulating that journey between town and country, Carleton pulled in diverse bits of Americana, from the Forties, via Hepburn-style denim pants and jacket, to the early Eighties, by way of bleached plaid shirts and ringer polos. The influence of WASP casual also abounds in the oxford cloth dress shirt, madras blazer, sun-bleached knits, and leather moccasins.

There are plenty of more literal plays on Bean classics too, like the brand’s well-known leather-rubber boots, which Carleton recast in waxed canvas, to the brand’s iconic boat and tote, which he salt washed and dyed in new colors, and classic twill canvas shorts and trousers, which have a sleeker fit. “This is about taking old ideas and reformulating them,” he said.

Making the past sexy is something Carleton counts as a skill. His Rogues Gallery brand made waves when its T-shirts, screened with old nautical imagery, hit the market a few years ago. “There’s no one more perfect for this collection,” Vickers said of Carleton, who also worked for L.L. Bean as a senior designer earlier in his career. “He has a thorough understanding of L.L. Bean, Maine and classic American sportswear.”

Carleton reiterated that while designated for a new, more contemporary audience, Signature is meant to be accessible. “This isn’t a fashion collection; you won’t see this on the runway,” he said. “It’s a modern approach to the American wardrobe.”

Bean, which currently operates 14 stores, will offer the Signature collection online on its own dedicated Web page, llbeansignature.com, as well as a subcategory on the company’s home page. There will be boutiques within existing L.L. Bean stores and it will also have its own specific catalogue. Shot in and around Acadia, Maine, Signature’s inaugural catalogue, which comes out in March, features model Maggie Rizer, who will serve as the face of the spring campaign. Down the line, Vickers said, L.L. Bean Signature will also have its own retail presence. “We will start to test boutique-oriented stores in 2010 and roll them out in 2011,” he revealed. The units would be significantly smaller than existing L.L. Bean stores, which average 26,000 to 30,000 square feet, Vickers said.

In terms of volume, he declined to make a projection for Signature, saying only: “The sky’s the limit. This is a launch and we’ll learn as we go. But we see it as a significant part of our future business.”