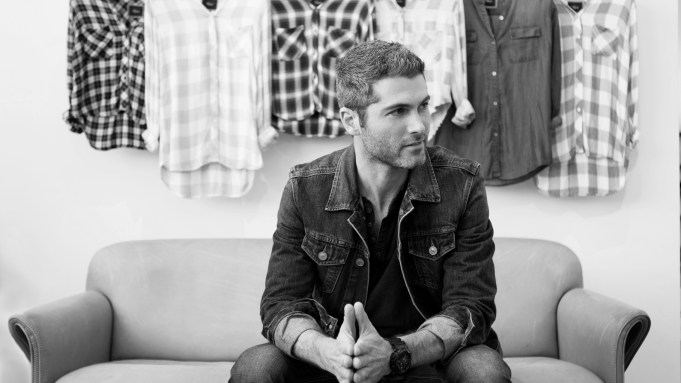 In eight years, Jeff Abrams has managed to take the classic plaid button-down and make it anything but boring.

His Los Angeles company, Rails, started out making that style shirt for women in rayon, rayon blends and other fabrications that lend to a luxe, feminine feel that landed on Jessica Alba for her off-duty wear, Kendall Jenner as she glides through the airport and Gisele Bündchen celebrating husband Tom Brady and the New England Patriots’ win at last year’s Super Bowl.

“We’re at this turning point where we’re about to become a real global player,” said Abrams, who is owner and designer at the company. “We’re trying to build this long-term lifestyle brand.”

The privately held company doesn’t disclose revenue but Abrams said it has been profitable since Day One and is rounding the bend to become a “midsize” business. He estimates the company’s sold more than 750,000 shirts, with most starting at around $148. The company’s seen 300 percent growth in its own online shop and 200 percent growth year-over-year among its brick-and-mortar partners. The line is in more than 1,000 retailers globally, including Bloomingdale’s, Nordstrom, Shopbop, Revolve, Harrods and Selfridges. The company’s growing beyond shirts with customizable denim, printed fabrics, cashmere, dresses and separates. Men’s soft launched this year in a handful of retailers, with a full rollout planned for next year. The same goes for a kids collection, called Little Rails, which soft launched with development into a full collection next year.

“There are a lot of things happening on many different fronts, from the product side to the evolution of the collection,” Abrams said. “The men’s collection. The kids collection. And then there are all the different avenues for us to reach our customers, whether it’s through our e-commerce platform to actual brick-and-mortar.”

What happens next at retail could also help nudge the company along in its trajectory. Rails is in the process of working out shop-in-shop deals with some of its retail partners that could come in focus as early as spring.

But Abrams also wants to control the Rails retail destiny with company-owned stores. He’s eyeing Rails units in Los Angeles and New York by mid-2017, with openings timed relatively close to one another. That would be followed not too long after by London. Australia and Japan also present opportunities for stores in the relative short-term, Abrams said.

Abrams and the story of Rails boils down to sweat equity.

The UC Berkeley grad worked at a TV animation studio after graduation where he learned about marketing and advertising and their role in growing a business. He was still working there when he launched Rails with $5,000 and a single product: a hat on which Rails was printed. Alba was the first to wear the hat. He later quit that company and would wake up at 5:30 in the morning to trade stocks from 6 a.m. to 1 p.m. in his apartment before spending the rest of the day on Rails, named after his time riding the Eurorail while living in Europe.

“I just kept recycling whatever money I was making,” Abrams said. “I was working in my apartment and not spending money on anything. My whole focus was trying to grow the business and we’ve run a relatively lean operation compared to some people. I never outsourced a job to somebody that I felt I could do myself.  I never said ‘Oh, we need to sell the product. Let me go hire somebody.’ No. I went in my car, driving around for four months trying to sell product.”

He and the business also managed to power through bumps in the road. There was the time when the company was still young and Anthropologie put in a 3,000-unit order. Abrams hand-packed all 3,000 units, affixing stickers on boxes. An 18-wheel truck pulled up, packed up the boxes and Abrams celebrated that night. He got the call the next morning from the trucking company that the vehicle was robbed and the shirts were nowhere to be found.

“They never found the shirts,” Abrams said. “It took about eight months to get paid by the insurance company. I never was able to reship those goods, so that could have put me out of business but I found a way to survive.”

Kate Moss wearing one of the hoodies represented a turning point for the brand. Another was Bündchen wearing a Rails shirt at the Super Bowl, which brought some 100,000 people to the Rails site seeking out the same shirt.

The company, now totaling 40 workers in L.A., is no longer the start-up it was, but Abrams keeps the early days still fresh in his frame of reference.

“There’s something about that time [at the company’s start] where the grind of it was, in some ways, the most rewarding because every day you’re waking up trying to push this boulder up a hill. You wake up every morning and try to advance just a little bit,” he said. “Eventually, you start getting some momentum and then things start to move and it becomes not about just trying to survive, but how do you grow? And how do you still be creative and come up with things that girls want to wear a year before they want to wear them. That’s the challenge.”