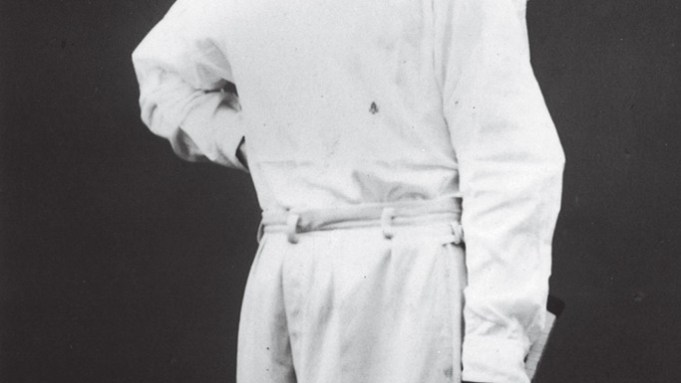 1927 Lacoste, whose nickname is the Crocodile, for his tenacity on the court, makes a white polo shirt for his personal use on the tennis court, bearing an embroidered crocodile on the chest.

1952 Apparel exports to the U.S. start. A year later, David Crystal, owner of what eventually became Crystal Brands and the Izod label, buys 50 percent of the distribution rights to Lacoste for the U.S. Izod and Lacoste would be associated for many years.

1961 Apparel manufacturing and distribution license is signed for Spain.

1966 Lacoste signs an apparel manufacturing deal in the U.S.

1978 The company licenses Cahours de Virgile for eyewear and agrees to a manufacturing and distribution deal in Brazil.

1981 Lacoste collaborates with L’Amy on a line of sunglasses and optical frames. Edgar Hamon is licensed for belts and Sogedi for travel and sport bags.

1987 Seibu Saison takes over the license for Japan.

• Turkish and Mexican licenses are signed.

1992 A license is signed to make and distribute apparel in India.

• Marking its 60th anniversary, Lacoste organizes a worldwide campaign in support of the fight against multiple sclerosis, raising more than $1 million.

• Licensed apparel distribution starts in China, and a boutique opens in Shanghai.

1998 Devanlay is taken over by the Maus family (90 percent) and Lacoste (10 percent). The Maus family, through Devanlay, thus becomes a 35 percent shareholder of Lacoste, with the remaining 65 percent belonging to the Lacoste family.

1999 License is signed for Lacoste home textiles with the Descamps SA unit of the Zucchi-Bassetti group.

2000 Christophe Lemaire succeeds Gilles Rosier and is responsible for the artistic direction of Devanlay’s Lacoste activities. His first apparel collection will be for spring 2002.

2002 The first new concept boutique opens in Düsseldorf, followed by shops in Omotesando in Tokyo, Lyon, Orlando, Berlin, London, Istanbul and the next year, Paris and New York.

2004 Touch of Pink scent launches and is ranked among the top fragrances sold in Europe’s main countries.

• The Lacoste Piqué Stretch polo boosts the brand, particularly in the U.S., which, at yearend, is Lacoste’s top market.

• Michel Lacoste becomes chairman and ceo, succeeding his brother Bernard, who steps down for health reasons and is named honorary chairman.

• The René Lacoste Foundation is created under the aegis of the Fondation de France, helping young people to find their way in life through sport.

n Lacoste becomes official sponsor and outfitter of umpires and “ball kids” of the Australian Open.

2009 Lacoste begins its support of the Save Your Logo campaign to preserve biodiversity on the planet and safeguard crocodiles.

n Hayden Christensen is the face for Challenge men’s scent.

n Lacoste’s e-shop in France is created by Lacoste, Devanlay and Pentland. By August, the e-commerce site becomes available in the U.K. and Germany.

n A flagship opens in Hamburg.

n Lacoste LAB, which revives the brand’s tradition of innovation and builds a bridge between its heritage and its future, is introduced.

n In New York, a flagship opens on Fifth Avenue, as well as a boutique in SoHo.

n At the end of 2011, besides its institutional Web site, the 36 countries in which the brand is present all have Web sites. The institutional site is translated into 11 languages. In 2011, it has more than 1.5 million visitors monthly, which represents 16 million unique visitors a year.

n Lacoste LAB products — a bicycle, football and rugby balls, a boomerang, a moto helmet, a surfboard and two skis — sell exclusively at Colette in Paris.