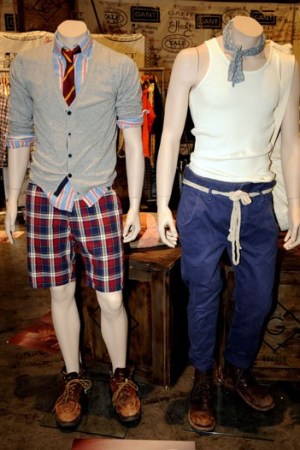 This story first appeared in the August 26, 2010 issue of WWD. Subscribe Today.

Retail buyers sought to navigate price increases and lackluster fashion trends for spring. In addition to a stumbling recovery, key challenges for vendors in the back half of this year and in 2011 involve issues related to raw materials shortages, rising production costs in China and increased expenses for shipping internationally.

Buyer traffic was uneven, appearing strong during some periods of the shows but sparse at other times. And attendees sent mixed messages about the outlook for spring, with some reporting an uptick in business but others less optimistic.

Peter Kim, chief executive officer of Hudson Jeans, which exhibited at the ENK show, was blunt in his assessment of the economy. “The retail climate is still pretty bad, and I think it will get worse before it gets better,” he said. However, Kim sees opportunities for nimble players. “Even during the Great Depression, some of today’s most successful companies were started.”

Hudson Jeans itself is poised to post 20 percent top-line growth this year. “It’s all about the fundamentals. The world has changed, and it’s not going back to what it was,” said Kim. “You have to deliver better product, better service, and examine every nook and cranny of your company.”

Hudson has invested heavily in marketing its brand, spending, by Kim’s estimates, five times as much as other brands of similar size on a splashy advertising campaign featuring Georgia May Jagger. “It’s a disproportionate investment for a company our size, but I think it shows that we are focused on the long-term potential of this brand,” he explained.

Pan Philippou, ceo of U.K.-based Ben Sherman, said foot traffic to his booth at Project was down. “I don’t think traffic was as strong as January, but we had good conversions to sales from those who were there,” he noted. “We got a great response from key retailers like Nordstrom, Lord & Taylor, Macy’s and Bloomingdale’s.”

Despite Philippou’s assessment, according to MAGIC figures, total attendance at its shows, which included MAGIC, WWDMAGIC, Project, Pool and S.L.A.T.E., was up 8 percent over last year. Other shows in Las Vegas included ENK Vegas, MRket, Capsule, the PGA show and the Off-Price Specialist show.

Philippou noted stores were eager to boost inventory levels after buying conservatively over the past two years. “In many respects, there is a scarcity of product after 2008 and 2009, as everyone has been so careful with inventory,” he noted. “Even the smaller specialty stores have become a lot more professional in managing inventory and sell-throughs than they were five years ago.”

Steve Birkhold, ceo of Devanlay U.S. Inc., the Lacoste apparel and accessories licensee, echoed those sentiments. “I think people have been very careful about managing inventories and trying to get away from promotional strategies by offering more value and maintaining their brand equity,” he said.

Birkhold singled out Nordstrom as a notable example in this respect. “They have been very specific in their promotional strategy.…They only promote a few times a year, and when they do, it’s in a very brand-appropriate way. I think Nordstrom is the epitome of a retailer that is executing a strategy to raise the bar in reducing promotional activity and raising price points,” said Birkhold.

Jonathan Greller, senior vice president and general merchandise manager of men’s for Lord & Taylor, said his store has been enjoying double-digit gains in men’s as it continues to shine a light on the category. “We don’t see that changing in the future,” he said. “We continue to look for price and value, because that’s what seems to be working.”

In terms of fashion, Eric Jennings, men’s fashion director for Saks Fifth Avenue, said the biggest surprise he discovered at the show was the overriding trend toward nondenim bottoms. “We saw that at every denim booth,” he said, noting that, instead of their traditional jeans offerings, companies were focusing on khakis, colored chinos and summer-weight corduroys.

Other opportunities for spring include the workwear concept, an idea that many men “haven’t picked up on yet, so we will bring it to him,” said Jennings.

Nick Wooster, men’s fashion director for Neiman Marcus and Bergdorf Goodman, said he liked the fact that everything is cleaner for spring. “It’s still washed, but cleaned up and polished,” he noted. Like Jennings, he pointed to the importance of nondenim alternatives, singling out chinos with “denim DNA,” such as those from Grown & Sewn, as standouts.

Oscar Feldenkreis, president and chief operating officer of Perry Ellis International, was among those exhibitors sounding upbeat about the season. “The show has been excellent and the mood on the men’s side has been strong. Men’s in general has been doing better than other areas of apparel,” he said.

However, Feldenkreis did point to the challenges shared by brands across the board. “We are keeping an eye on inflation, and there are issues with rising material costs, sourcing and freight,” he said. “I think we’ll be facing a shortage of cotton for a while. However, we have a strong sourcing infrastructure, with 250 to 300 people on the ground in Asia to deal with any issues.”

Feldenkreis said the rising costs could add 5 to 15 percent in final price tags. “If the consumer feels like they like an item, they will pay for it,” he reasoned. “There may be some resistance, so you have to make sure the product is new and better than last season.”

Ronny Wurtzburger, president of Peerless Clothing, agreed with Feldenkreis’ figures. “Men’s wear prices haven’t risen in years,” he said, meaning retailers will have to either absorb the hikes, push them back onto the manufacturers or pass them along to consumers.

Seven For All Mankind’s new store at Santa Monica Place has been the brand’s best retail opening ever, said Susan Kellogg, president of VF Corp.’s contemporary brands coalition. The brand is offering innovative styles such as lightweight spring corduroy jeans for guys and Seventies flares for women, while simultaneously building on its more basic product. “You want newness and trend, but at the same time, you have to defend and protect your core,” noted Kellogg. “You can’t swing too far toward the front of the train. Our dark boot cuts are still selling well. It’s a balancing act.”

Crosstown rival True Religion also is seeing an upswing in men’s denim sales. “The denim space started slowing in the fourth quarter of 2008, but I think it’s done contracting,” said Michael Egeck, the newly installed president of True Religion. “It’s bottomed out and poised for growth again. Our men’s business is growing now, and it’s actually healthier than our women’s business. The women’s market has really shifted to twill looks — although we don’t see that as a permanent shift.”

At Gant, ceo Ari Hoffman noted the Project show was the very tail end of the ordering cycle for the Sweden-based brand. “We’ve already seen 95 percent of our stores. We close all spring ordering next week,” he explained. “We have a very strict business model so that we can deliver everything on time. Deliveries are everything now. If you extend the selling cycle, then you can miss the big picture of on-time deliveries.”

The tough economy gave a boost to business at the Off-Price Specialist Show. The event, which moved into a new location at the Sands Convention Center, boasted a 20 percent increase in exhibitors. Many of the additions were in men’s and women’s sportswear, footwear, children’s wear and jewelry, according to David Lapidos, executive vice president of the show. “They’ve [attracted] a lot of prestige companies who have never shopped here before,” he said.

He added the recession “forced many people out of business,” and those that remain are “seeking ways to increase margins and entice their customers to shop. By picking up product at rock-bottom prices, they’re able to achieve these goals.”