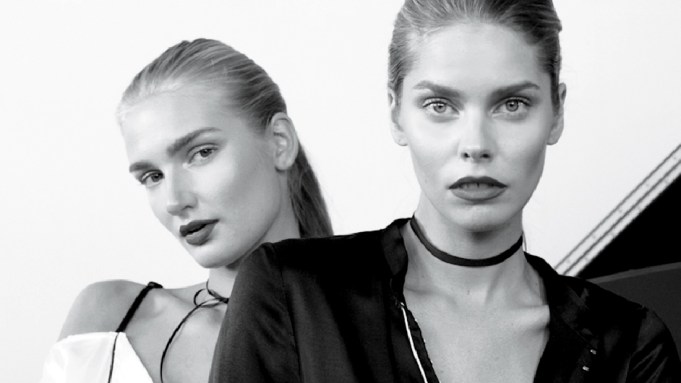 TECTONIC UPDATES
Get ready for lots of changes at WWDMAGIC.

To start, UBM plc’s April deal to purchase Business Journals Inc. means WWDMAGIC and Fame — the latter previously part of the BJI portfolio — are working together. What does that mean for buyers? Brands showing at WWDMAGIC might appear at Fame, or those showing at Fame could exhibit at WWDMAGIC. A cocktail event will take place in Las Vegas, signaling the two shows’ partnership.

“[Attendance] numbers are looking great, which shows us that people need to come and they need to find new brands,” said WWDMAGIC and Project Womens show director Kelly Helfman. “As much as the industry right now is feeling a little rocky, we’re really positive.”

Looking more closely at the show floor, denim exhibitors are growing with Rolla’s, Fitme Jeans and Raven Denim making their debuts at WWDMAGIC. They’ll join the broader roster of brands new to the show that includes Line & Dot, By Together and Skemo. Incoming international brands include U.K. lines Emily and Fin and Vacant Clothing, along with Canada-based Kersh.

Ath-leisure, while not commanding a designated area of its own on the show floor, will have a presence throughout WWDMAGIC.

And visitors can pick up new tricks and tools of the trade by stopping in at the WWD Social House with programming throughout the show, where WWD editors, bloggers and others will tackle topics like plus sizes, digital, influencer marketing and trend forecasting.

IF THE SHOE FITS
There is a celebrity shoe launch expected at FN Platform — although show officials are tight-lipped on specifics beyond that.

Wilson Phillips will perform Aug. 15 at 6 p.m. at the FN Cafe on the show floor. There will also be Glamsquad hair and makeup touch-ups, Foot Petals foot massages and food options throughout the show’s run.

A cocktail reception will be held Aug. 16 at 5 p.m., during which time the winners of the Fashion Institute of Design & Merchandising and WSA endowment scholarship will be showcased.

BIGGER AND BETTER
The kids’ show formerly known as Playground takes on a new presence at the convention center as Children’s Club. The show’s Vegas debut represents an expansion to the West Coast for the New York-based trade show.

Children’s Club Magic will focus on contemporary children’s apparel much like Playground and it will continue to be held in Vegas February and August. The upcoming show boasts more than 60 brands, including Splendid, DL1961 Premium Denim, Vintage Havana Kids, Mimi & Maggie and LeLe for Kids.

TECH BOOM
Sourcing at Magic has expanded from its global supply chain roots to include sustainable practices and innovative wearable technology.

Seminars on Made in the USA and denim will focus on trends to innovation.

NEW DIRECTIONS
Project Las Vegas gets tech-savvy this month. The show launches a section called P1V0T (see what they did there?). It’s the first time this area will be in Vegas, bringing with it a focus on technologies in the way of design, product development, merchandising and selling. P1V0T will house brands like mobile and online marketplace FashWire, techpack app Techpacker, e-tailer Fovo, cloud-based solution provider First Insight and reviews and marketing platform generator Yotpo.

On the educational front, Project and Fung Global Retail & Technology are hosting a panel tackling omnichannel, Millennials and customization. Adriano Goldschmied and premium denim manufacturer ISKO will round out two additional panels.

The official Project after party will be held at The Cosmopolitan nightclub Marquee with a performance from Wiz Khalifa.

WELCOME TO THE FAMILY
MRket marks its debut in Las Vegas as one of the newest members of the UBM family, with a locale between The Collective and Project. The show is part of the BJI Fashion Group-UBM deal. It is expected to boost all the men’s shows, given the new proximity of these shows to one another.

Among the floor sections are Made in Italy, which houses Italian exhibitors showing tailored apparel, accessories and sportswear; casual brands with West Coast influences are grouped in the Coast Life section, and buyers can find fashion-forward brands in the Vanguards Gallery.

LOCATION, LOCATION, LOCATION
The buzz across the trade shows is the new show adjacencies, which will be a boost for exhibitors and a benefit for buyers. The Collective show director Alli Johnson calls the new location of MRket at Mandalay Bay a “game-changer” for her show. The men’s shows are assembled under a single venue in what most see as a big time-saver for buyers.

The showroom Money Ruins Everything makes its debut at The Collective, bringing with it brands Fila Heritage, Primitive, Benny Gold, Raised by Wolves, Black Scale, Kennington, Pas de Mar and Asphalt Yacht Club, among others. Johnson hopes the showroom will serve as the “anchor to build a neighborhood of great directional collections.”

To help buyers get through their day, Bag Pro is sponsoring a complimentary coffee bar lounge on the show floor.

ANOTHER LAP
Retailers take note: Pool has also moved. The show, which focuses on emerging designers, will be located on the second floor next to Stitch and AccessoriesTheShow. Pool continues to be a place for buyers to find up-and-coming businesses with brands like T-shirt line House of Wolves; Ethic Goods, a Washington, D.C.-based business selling items handmade in Ethiopia; skin-care company Honey Belle; vintage seller Trendy & Tipsy; bamboo sunglass line Swell Vision, and These Are Things, which sells enamel pins, embroidered patches and other small items.

Live art from Curbside Apparel, which has become a staple of the show, will be back along with the sock giveaway Sock It to Me.

BLOGGER BRIGADE
Blogger Project will get its own identity separate from men’s when the female bloggers move to the Oasis Lounge at Project Womens. It’s the first time they’ll be there after historically sitting on the men’s side at Project. The six influencers will meet with brands, create content throughout the show’s run and host exclusive dinners.

“We’re investing more in it now and separating it from men’s,” said show director Kelly Helfman. “We’re choosing the influencers that represent our show with that kind of West Coast — I hate to use the word bohemian — but that festival [vibe].”

Bloggers participating include Ania Boniecka of Ania B., Candice Pantin of I Like I Wear, musician Quigley of Officially Quigley, Eva Catherine of her namesake blog, Gabrielle Lacasse of Dentelle + Fleurs and Nikia Lee Provenzano of Mad Maven Style.

MODERNITY
Retailers might want to do a little studying before hitting the Stitch floor. The show partnered with trend forecasting firm Worth Global Style Network this season to pull the latest looks from various vendors to help buyers with their shopping.

The Together at Stitch section is once again dedicated to sophisticated and fashion-forward brands.

BLING TIME
AccessoriesTheShow returns to Vegas aiming to be the stop for all things accessories across a range of price points. Show officials expect about 200 brands to exhibit, including Adorne, Bebe Handbags, Bora, Escape Watches, Freyrs Eyewear, Latico Leathers, Onigo Imports, Pinky Ring Jewelry, Samoe Style and San Diego Hat Co. The Nest, within AccessoriesTheShow, will continue to focus on lines billed as new and innovative.

CURVENV
CurveNV’s relocation places it in the center of Project, where organizers hope to draw swim and lingerie buyers.

“For the first time, Curve is going to be joining us,” said Helfman of Project Womens. “Its brands correlate with the brands we have at Project Womens, so it’ll be a good crossover for buyers to shop one location.”

Accessories continues be a stalwart of the show, packing in belts, bags, shoes, hats and jewelry. New vendors in the category include Hang Accessories and Chanour Jewelry mixed in with returning vendors such as handcrafted gifts and accessories maker Art Studio Co., Laurel Burch Jewelry and Lavive Bags and Luggage.

Free breakfast, lunch and afternoon snacks are available to retailers, with a complimentary shuttle service running between WWIN and the Mandalay Bay or Las Vegas convention centers.

THEMATIC APPEAL
Capsule continues to edit its show floor tightly and by theme.

Other sections of the floor to note: The Studios, with digital media creatives; Quest, with modern European and American brands, and Freedom Hall, which is focused on community and craftsmanship. For a quick refresh, Blind Barber is providing cuts, shaves and trims.
IF IT AIN’T BROKE
A few features familiar at the Agenda Long Beach flagship will make their debut at the Vegas iteration, starting with Enclave, a section aimed at buyers of premium street and men’s contemporary lines in a gallerylike setting.

The Hundreds founders Ben Shenassafar and Bobby Kim, who hosted their Facebook talk show “Having Said That” live from the Agenda floor in Long Beach, will have their show aired in Vegas.

Tempe, Ariz., cobbler Randy Lucas will produce custom footwear from the show floor, while Undefeated and Jason Markk, founder of the premium shoe cleaner of the same name and downtown Los Angeles sneaker-care outpost, have partnered for an army-inspired shoe cleaning station on site.
DOORBUSTERS GALORE
With a retailer attendee mix that’s roughly 70 percent small business and the rest multiunit chains, OffPrice offers the chance to stock up on holiday deals.

“This is August. You’ve got to be thinking about what you’re doing for holiday,” said OffPrice chief executive officer Stephen Krogulski. “You can come to OffPrice and find a deal that could become a post-Thanksgiving doorbuster splash. If you’re a retailer, this is the time to invest.”

This season, the show boasts more than 450 vendors, up slightly from February, with a mix of product for women, men and children.

Show officials have been working with retailers in the weeks preceding OffPrice, offering information via its magazine and buyer-relations group to help store owners understand not only the show, but their buying strategy.