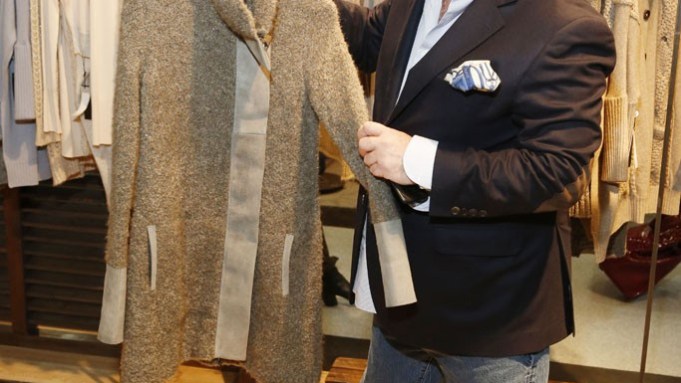 NEW YORK — Cool fall days were on the minds of retailers and exhibitors, who were busy writing fall orders at Coterie, which ran Feb. 24 to Feb. 26 at the Jacob K. Javits Convention Center and Pier 94 in New York. Some 1,401 exhibitors were featured, spanning the contemporary, eveningwear, denim and accessories categories.

Among the key fall trends were:

• Embellishments such as gold hardware, studs, metals, jewels and sequins.

• Lots of black and white, as well as geometric patterns and prints.

James Hogan, who owns two women’s stores in Worcester, Mass., and Savannah, Ga., under his own name, said: “We buy a ton here. We loved Ted Baker, especially those floral dresses.” He said he caters to a lot of college students in Savannah and that line is good for them. He also bought from Edward Achour Paris and T.ba, “which has amazing riding, equestrian looks and Edwardian coats. I bought it last fall and sold out in three days,” said Hogan. He also liked Aldo Martin’s for their novelty knits, and Svee, “which does wonderful quality knits, which look like things you find in Italy.”

Andy Mallor, owner of Andrew Davis, a men’s and women’s clothing shop in Bloomington, Ind., was shopping Coterie with his daughter, Kate Mallor, the women’s buyer. Last October, Andrew Davis started carrying women’s apparel. Among the women’s lines they were buying were David Lerner, Vince and Waverly Grey. “Waverly Grey is made in New York. The vegan leather pieces were beautiful,” said Kate Mallor. “I love things that are made in the U.S.” She also loved Smythe’s blazers and tartan pants.

Maureen Goldberg, owner of Maureen Goldberg Fashions, a specialty store in Amagansett, N.Y., thought this was the best show of the year and she wrote many orders. “The clothes look really good this year,” she said. She noted that she bought a lot of big, oversize looks in sweaters, tops and soft dressing. Some of the lines she bought at the show were Planet and Comfy USA Inc. From Comfy, she bought a lot of knits that were “soft, drapy and wonderfully priced.” She also liked Sarah Pacini’s gorgeous knits, pants and jackets and the quality of John Laing.

“People are looking for better quality cashmere, value and design,” said Fischer, whose knits start at $79 wholesale and can go as high as $400 wholesale for the heavy pieces. Fischer, who in addition to his wholesale business has five freestanding stores, is launching a new Web site that has e-commerce over the next few months. It will be a global site, with capability of doing business in the U.S., U.K. and China.

Ruthy Grode, chief executive officer of Bailey 44, said she was having a very good show and her booth was crowded with retailers. She said she was doing well with “anything quilted and anything in leather or tweed.” For fall, Bailey 44 did a lot of washed jacquards and combined eco leather and fine-gauge ponte to create jackets and blazers. One, for example, combined a classic blazer with a casual leather drawstring hood. Another combined leather and bouclé for a moto-style jacket. Wholesale prices on the jackets ranged between $149 and $179. Among the accounts working with Bailey 44 at the show were Tony Walker & Co., E Street Denim, Intermix, Saks Fifth Avenue, Lonnys and Willow St.

Kamali Kulture, whose pieces are priced under $100 retail, was showing at Coterie for the first time. Among the looks they were selling were jersey dresses, separates and swimwear in sizes XS to XL. The company currently does business with such retailers as Amazon.com, Zappos.com, Nordstrom Direct and Opening Ceremony. A spokeswoman said they had been writing orders from various Japanese retailers, as well as stores from Florida and Virginia.

Minnie Rose, which had a very active booth, was introducing its new “swag suit,” which is the updated version of the velour tracksuit. The design features a biker jacket with a removable Mongolian fur collar. The jacket can be paired with either the hipster skinny leggings or pants with zippers down the side. “Just as I saw a need in the market with the original tracksuit for a young girl, I saw that it was time to revitalize the suit for the woman of today,” said Lisa Shaller-Goldberg, founder and owner of Minnie Rose, who previously worked at Juicy Couture. The new swag suit comes in sizes XS through XL. Wholesale prices for the hipster skinny leggings are $58 and the sassy pants with zippers down the side are $79; the biker-chic jacket is $117, and one with the Mongolian fur collar is $167. A zip-sleeve pullover wholesales for $68.

Shaller-Goldberg said she was also seeing a lot of action for her wovens, sleeveless cowl-neck sweaters and herringbone, color-blocked and geometric knitwear groups. “Business is phenomenal. We’ve been slammed nonstop,” said Shaller-Goldberg.

Jovani was also having a busy show. The eveningwear firm was opening new accounts and increasing its business with existing accounts, said Abraham Maslavi, chief operating officer and co-owner. He said they had seen many international accounts from places such as United Arab Emirates, London and Turkey. Jovani currently does business with stores such as Nordstrom, Neiman Marcus and Harrods.

Rebecca Minkoff was doing well with its new sportswear offerings. One of its bestsellers was a fitted leather and wool blazer. The company recently launched a knitwear collection, which has gotten off to a brisk start. “Novelty knitwear has been very strong,” said Elissa Bromer, president of Rebecca Minkoff, pointing to luxurious hand-knit cardigans and big cowl-neck sweaters.