After a 28-year retail career, Christina Makowsky has started a charitable fashion line. 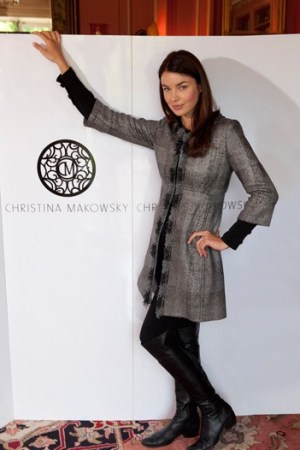 Is there life after a 28-year retail career? Christina Makowsky thinks so.

After shutting her Georgina designer boutiques in Hewlett and Manhasset, N.Y., in February, Makowsky has launched a namesake sportswear and eveningwear collection that she sells to private clients and through trunk shows, with a percentage of every purchase benefiting someone in need.

For more than two decades, Georgina catered to Long Island’s wealthy Gold Coast and South Shore crowd and carried lines such as Michael Kors, Zac Posen, Dolce & Gabbana, Peter Som and Proenza Schouler. Earlier this year, she decided to close the stores because the luxury market was no longer the place to put one’s money, it wasn’t fun any longer, people’s mind-sets were changing and competitors’ markdowns made it impossible to compete.

With that in mind, and the fact that she graduated from the Fashion Institute of Technology, Makowsky decided to change direction. Prior to closing the stores, she had dabbled with her own private label line for about a year and a half, which accounted for about 15 percent of her designer business. She is now throwing herself into her new venture, which she calls a “humanitarian brand.”

The fall collection, which she produces under her own name, includes T-shirts, cropped leather jackets, leather dresses, tweed jackets, jersey dresses, gowns and cocktail dresses. Retail prices range from $450 for a jersey top to $15,000 for a ballgown.

“It’s not trendy, it’s high style and the most gorgeous fabrics,” she said. Makowsky is based in a studio in Woodbury, N.Y., and produces the entire collection in New York.

She said customers are finding out about her business through word of mouth. Customers can come directly to her studio to order from the line, or can attend trunk shows. From Tuesday through today, she is holding a trunk show at the de Seversky Center in Old Westbury, N.Y., by appointment, where part of the proceeds will benefit the North Shore Women’s Center.

“Right now, retail is not about shopping in stores. They come up to the studio,” she said. While customers can’t change what’s in the line, they can custom order bridal gowns and gowns for the wedding party.

Makowsky declined to divulge business projections. She said she plans to do several trunk shows at charity events this fall, where she’ll donate a percentage of the proceeds to that particular charity.