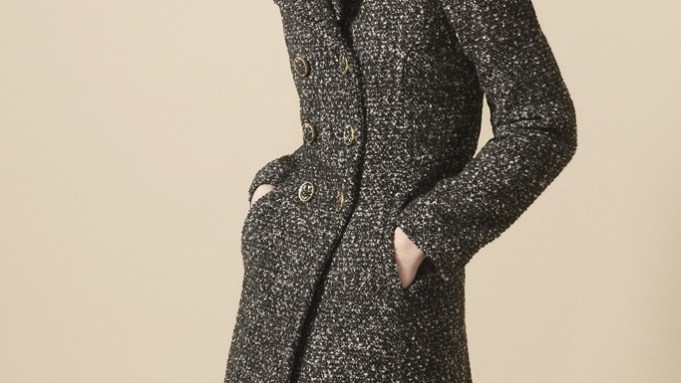 LONDON — Goat is ready to graze in greener pastures.

With a new minority shareholder, double-digit sales and profit growth, and no major debt under her cashmere belt, Jane Lewis, founder of the British clothing label Goat, is ready to build on the business she founded just over ten years ago.

The label counts Gwyneth Paltrow, Victoria Beckham, Nicole Kidman, Cameron Diaz, Keira Knightley, and the Duchess of Cambridge among its fans, while wholesale accounts include Matches, The Cross, and Fenwick’s in London; Louis Boston in the U.S.; My-wardrobe.com, and Matchesfashion.com.

With support from new minority investors Amery Capital, whose portfolio includes British fashion retailer Long Tall Sally and the men’s footwear label Oliver Sweeney, Lewis said her goal is to expand into accessories, new markets, open a standalone store in London’s Mayfair, and ultimately transform Goat into a brand name, with an eye to selling it.

“This is a long-distance run,” said Lewis, who has financed the label herself since its launch in 2001. “Our investors have a lot of retail experience, a lot of wisdom to impart.”

In April, the label, known for its coats, cashmere knitwear and wool crepe dresses with a streamlined Sixties feel, was also selected by Walpole, the British luxurytrade body, as a Brand of Tomorrow, recognizing its potential to achieve global growth.

The lion’s share of the business comes from the U.K., and about 80 percent of the collection is made in Britain, with the average price about 400 pounds, or $620, for a dress. Lewis said her approach to design is simple: “Goat is a label by women for women, whether they’re in their 30s or their 70s. When I design a dress, I think ‘Can you get out of a car in it? Wear a bra with it? Does the pocket make you look fat?’”

Suzanne Pendlebury, buying manager at Matchesfashion.com, said: “The cut and silhouette are incredibly flattering on all ages. Jane knows how to design a dress women want…and [there is] just enough design detail to make it interesting without being fussy, so the hemline and cuff length are always just right. Also, the colors she uses makes themreally stand out — a pop of red or emerald keeps the color palette lifted and fresh.”

As part of her push into the North American market, Lewis is taking part in Coterie in New York.

The spring collection includes Goat’s signature crepe shift and tunic dresses in shades such as sky blue, cream or geranium, or in a textured cotton floral fabric as well as striped and checked knits in colors including chalk, navy or aqua.