Self-taught designer Ollie Amhurst started his label as a means to launch the “cool men’s jacket” that he felt was missing from the fashion landscape. 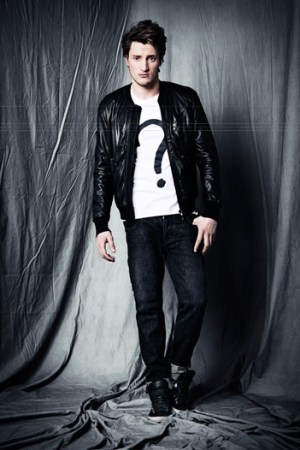 Self-taught designer Ollie Amhurst started his label Lot 78 in 2008 as a means to launch the “cool men’s jacket” that he felt was missing from the fashion landscape. “It built from that really,” said Amhurst during an interview at his studio on West London’s quaint Ledbury Road.

Amhurst, who had previously handled wholesaling for Giorgio Armani in the U.K., began his line by designing a men’s biker jacket in soft Nappa leather that focused on fit. The line got an instant boost when celebrities including Noel Gallagher, U.K. band Take That and actor Garrett Hedlund began to sport his wares, and Amhurst soon branched out into doing the jackets in canvas, brushed cotton and suede. A women’s line followed later in 2008, and he will launch denim and jersey this fall.

Also for fall, Lot 78’s men’s jackets will land in 11 Barneys New York stores including Madison Avenue, Beverly Hills and Seattle. “When the label was small my aim was Barneys — it’s as exciting as Net-a-porter [where the collection also sells],” said Amhurst. “I want to be in strong image stores.” In addition to Barneys and Net-a-porter, Lot 78 is carried at retailers including Browns, Selfridges and Harvey Nichols in London, Tsum in Moscow and Boon in Seoul.

For fall, the men’s jacket collection includes leathers in navy, oxblood and light gray — the entire collection is made and sourced in Italy — and comes in styles such as bomber jackets, a tailored leather jacket and brushed cotton biker jacket. The men’s denim collection comprises slim-fit jeans, while the women’s collection includes skinny jeans with zips at the ankle and leather details. The jeans are branded with a subtle, embossed label on the back of the waistband. As with his leather jackets, Amhurst has focused on “quality and fit,” rather than trends. “Most denim brands have a five-year shelf life, but everything [at Lot 78] has to have longevity,” said Amhurst.

Next up, Amhurst intends to expand the retail offering in his London atelier and showroom turned store. And this fall he will launch a stylish charity T-shirt in aid of cystic fibrosis, an illness his sister suffers from. The T will launch on Net-a-porter in September, to benefit the charity the CF Trust.