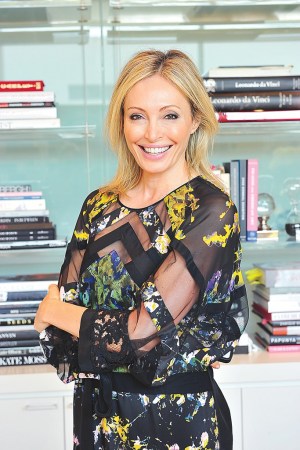 Before Lubov Azria married Max Azria and before she became chief creative officer of the BCBG Max Azria Group, she was all set to quit.

It was 1991 and Lubov was working as a sportswear designer at BCBG, but was frustrated the company was filtering too many retread pieces into the market. In the hopes of getting BCBG’s creative juices flowing, she proposed taking Max on a shopping trip to educate him about the merchandise already available in stores and to illustrate how BCBG was merely being a me-too apparel maker.

“I met him at his house. It was very sweet,” she recalled. “I was knocking at the door, but nobody opened it. They were in the backyard. Max lived in a tiny little house, and I walked to the back and I saw Max with his two daughters, Joyce and Marine, and he was laughing. He was on one of those big phones talking, and I remember looking at him and the way he was holding his two kids and I was like, ‘If only a man could love me half as much as he loves his two daughters.’ It was just a thought.”

Those romantic thoughts quickly passed when the shopping trip — and what happened subsequently — soured Lubov on Max. As he checked out the retail scene, Lubov was instructing Max on the assortments and how to interact professionally with people. She prevailed upon him to speak English, not French, shake people’s hands and all around be nicer, but Max didn’t seem interested.

“He was on the phone the whole time. I don’t think he even heard what I was saying,” she lamented.

Things didn’t get better. Following the shopping trip, Max invited Lubov out to dinner with his friends. Thinking it wasn’t a good idea to mix work and pleasure, she initially declined. Max convinced her the dinner was casual. Still, his friends questioned whether she was his girlfriend. Lubov clued them in on the nature of their relationship. “No, we’re working together,” she declared.

Afterward, Lubov related, “The car pulls in and Max, of course, opens the door because he was driving. He comes to my side, looks at me and says, ‘Would you sleep with me?’ I said, ‘No.’ He said, ‘Would you marry me?’ I said, ‘I don’t think so.’ That was Saturday, and on Monday, I went to his office to resign because I felt like it was inappropriate.”

Max wouldn’t let her resign so easily. He asked Lubov out to dinner again to discuss the situation. The romantic thoughts came creeping back.

“There was a kind of magic that was happening,” Lubov said. “There was a connection. I think because we’re both Jewish, there were holidays or traditions that we could connect on. I have to say that, to me, respect is greater than love. I respected Max first and then I slowly fell in love because he’s a man who’s achieved so much in his life, and I’ve never met anybody like that. He is giving, loving, caring and just such an amazing visionary. Nothing scared him, and I thought, that’s beautiful. That’s the type of person I want to be with.”

“I was not pregnant,” she laughed. That would happen soon enough, though. The couple have three children together: Chloe, Anais and Agnes. Lubov became creative director of the BCBG Max Azria Group in 1996, and she and Max have figured out how to manage their personal and professional dynamics.

At home, Lubov said, “We don’t really talk about business because it’s too much. You don’t want to bring that home.”

At the office, she said, in the beginning, “He would set goals, and I would execute them and run everything by him. I think, with time, he didn’t need everything to be run by him, and I just sort of kept on driving the vision, whereas Max drives the business side. The hardest thing for anyone is to let go. I still run everything by Max because I want him to know what’s going on, and I think he’s one of the greatest merchants out there.”

Charged with design, Lubov’s goal was to turn BCBG from an item business into a collection business. The brand’s spring 1996 collection presented in New York was a big step in that direction.

“Everything was a shock, and I was eight months pregnant at the time. I was enormous,” she remembered. “To us, the most important thing was color and showing the whole collection with a unique message and a thread through it telling a story. Our first model was Laura Bailey, a British girl. She was our Kate Moss. She opened the show and closed the show. It was very special. It was great.”

One of Lubov’s favorite collections came two years later in spring 1998, when BCBG showcased effortless dresses and separates. “It was so beautiful. To this day, it’s probably one of the most modern collections,” she said.

“The bottom line is to be inspirational. I don’t do this for me. I do it for my customers.”

Lubov embarks on a collection nine or 10 months out, when she assembles idea boards that could guide that collection. Fabric, color and silhouette play prominent roles in a collection coming together.

“Then, we start draping, working with things, getting vintage inspiration, going to flea markets. I’m a guru at flea markets right now,” said Lubov. “Opposites attract me, like [pairing] masculine and feminine [elements].”

Lubov’s attention to detail and passion for draping can be traced back to her education at the Fashion Institute of Design and Merchandising in Los Angeles, and even further back than that, to her ballet training as a young girl.

A native of the Ukraine, Lubov Motsevitsky was chosen at age 6 to go into gymnastics. An injury sidelined her from that sport, however, and ballet became her main endeavor. The Kirov Ballet came calling. Practices would last “three to four hours a day, and that was kind of my life,” said Lubov. “Being a dancer was a way to leave the country, and experience and travel the world. It was considered to be very upscale, privileged.”

Soon, though, Lubov would depart the country, and it wasn’t because of ballet.

“[Leonid] Brezhnev signed an agreement with Israel to let the Jews out. So, my parents had a unique [opportunity] to leave, so they decided to leave,” recounted Lubov. “I was 11 when we left in November, which was my birthday, and I didn’t even go to school that last three months after summer. And then we traveled for about a month until we got to San Antonio.”

“It was overwhelming. It was incredible. I remember flying over San Antonio and seeing those little blue spots, and I was like, ‘What is that?’ That’s a pool. I had never seen pools before,” Lubov said. She estimated there were about six Russian Jews in all of San Antonio. She didn’t speak English and had to learn fast. Eventually, she acclimated to Texas and, like a good Texan teenager, had the itch to be a cheerleader.

Of San Antonio, Lubov said, “I didn’t love it. It’s not a city, it’s a little town — but what I loved is the friends that we made, and I love the American culture, and the schools are the best.”

During high school, Lubov’s parents lost their engineering jobs, and the family moved to Los Angeles, where her parents had friends who could help them out. At Fairfax High School in L.A., art became Lubov’s principal focus because her body outgrew dancing.

She detailed that most professional dancers are around 5 feet 5 inches, while, Lubov said, “I grew to be 5 feet 7 inches and taller, and I’m like, ‘Oh my gosh, dancing is not what my body is made for.’ So, the next step was really art.”

Although Lubov wasn’t too familiar with the fashion industry, a recruiter from FIDM who visited Fairfax introduced her to the possibility of a fashion career.

“Next thing I knew, I was enrolled in the school. My parents really wanted me to be in fashion. I liked the idea of design, but I don’t think I ever wanted to be a fashion designer,” said Lubov. Once at FIDM, she continued, “I fell in love with pattern making. I fell in love with draping. I fell in love with how everything flows, and I think because of my discipline in ballet and growing up being very focused, I think it helped me to get the job done.”

And Lubov keeps getting the job done at BCBG. She outlined that BCBG’s customers expect the brand to offer them “wearable, beautiful clothes. I think that one of the things she really wants is a dress. We’re known for dresses. It’s funny because, even though we started with the baby-doll dress, the focus was always sportswear and separates.…If you look at a lot of dress companies, they will only do dresses. It’s like sequins on ruffles on beading. They overdo it because, to them, more is better. To us, it has to feel cool, effortless, sexy, all in the BCBG DNA.”

With the husband-and-wife Azria team at the helm and Lubov’s stepdaughter Joyce serving as creative director for BCBGeneration, the Azria family and BCBG are intimately interconnected. But Lubov isn’t keen on her daughters pursuing the family business.

“My first daughter, Chloe, is going to go work for the U.N. She wants to make this world a better place. My second daughter loves anime and Japanese [culture]. She actually speaks Japanese, so she’s going in that direction. My youngest one is an incredible singer and a great socialite. She’s actually a good actress as well, but I think her singing is her true passion. None of them are going to go into the [fashion] industry, and I don’t really want [them] to because the whole environment is shifting.”

Going forward, Lubov’s goals for BCBG are twofold. She is charting a course toward concentrating BCBG’s distribution network and, simultaneously, expanding its merchandise repertoire.

“From a business standpoint, I think we have to clean up our channels of distribution and keep a unique vision in the market, but also, on the other side, I think it’s really about lifestyle,” she said. “I would love a woman to walk in and have this amazing lifestyle assortment from the bed sheets to the furniture to the pottery and just experience a whole lifestyle of BCBG. I think that’s where I would like to be.”