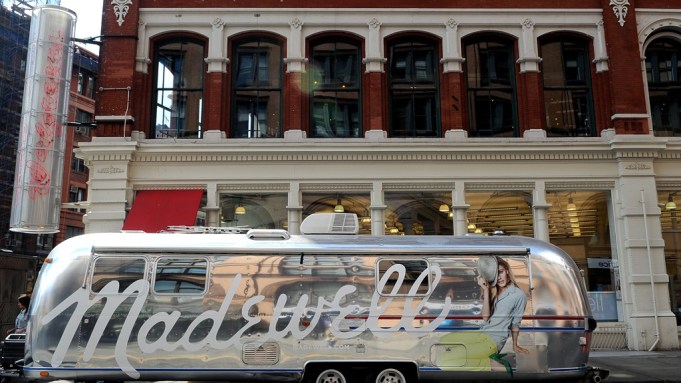 Madewell has moved past the early development stage and is ready to go.

That’s according to Millard “Mickey” Drexler, who has led the reinvention of the former workwear label into a casual and modern young women’s collection. After much work over the last six years establishing a distinct fashion identity, the chairman and chief executive officer of Madewell’s parent, J. Crew Group, has green-lighted a heady Madewell rollout.

“Starting a company like this, where there is a commitment to fashion, quality and design, is not an easy process,” said Drexler, in an exclusive interview. “We weren’t ready to take a more ambitious stand until we felt confident. It takes longer [with a fashion brand] than perhaps going into a discount or price-oriented business.”

Years passed, he said, before Madewell achieved a level of performance, and before he felt comfortable enough with the product and marketing to justify a rollout, which is in the works. Madewell will increase retail square footage by 30 percent this year, on top of a 50 percent leap last year. It’s seen operating 46 stores by yearend, compared with 31 last year, and in 2013, the pace of openings will quicken.

“The key is to have a viable concept and enough quality volume to pencil out locations,” Drexler said.

Madewell’s marketing intensified with last year’s catalogue launch. The third edition of the editorially driven book was issued in March. Madewell is also striving for greater exposure via social media initiatives, which Drexler acknowledges is a necessity. “When we open a new Madewell store, about 50 percent of those coming in are not familiar with the Madewell brand or stores. So we have a ways to go in getting more recognition,” he said.

Drexler declined to comment on Madewell’s financial performance, but market sources said the brand is approaching $100 million in sales volume, and in the last quarter generated a profit, on an earnings before interest, taxes, depreciation and amortization basis. It still needs to gain scale to offset costs and generate significant profits, but it appears to have moved past some growing pains.

On Thursday, Madewell commenced a cross-country denim road trip, with a Seventies-style, 30-foot-long silver Airstream stocked with jeans and deals on the denim, as well as sportswear and stylists to put it all together, to give the uninitiated a dash of Madewell’s cool, whimsical and sophisticated casualness. The five-week tour through May 19 started on Manhattan’s Astor Place and will hit 13 other cities, including Boston; Boulder, Colo.; Los Angeles, and Chicago, and some college towns such as Lawrence, which is home to the University of Kansas.

“This will bring awareness to our jeans and the Madewell aesthetic,” said Gigi Guerra, Madewell’s vice president of marketing. The tour will be played out on Facebook, where Madewell has set up a hub for tweeting, a pin board for fans to display favorite items, video content and a live photo feed via Instagram that will spotlight customers as they shop Madewell. There will also be a scavenger hunt for gift cards with clues tweeted about their whereabouts.

About eight years ago, one of Drexler’s friends told him about Madewell, a former workwear company in New Bedford, Mass., that dated back to 1937. Drexler bought the trademark and two years later began the reinvention process and leased the name to the J. Crew Group for $1 a year. In early 2007, the company became the full owner of Madewell by paying Drexler $240,000 for acquiring and developing the Madewell mark, and then invested $7.5 million into growing the business.

The brand is rooted in denim with a range of fits including the boy jean, priced $125 to $135; the “skinny skinny” ankle, priced $115 to $135; the high riser at $125, and the rail straight at $98.50. It also has a reputation for T-shirts, boots, skimmers, flats and dresses. It’s big on stripes and layering, as well, such as with color-blocked cardigans and T-shirts. For fall, some of the big fashion ideas are silk boy shirts, chambray and Oxford shirts, skinny ankle jeans and skinny ankle cords; textured tops, ankle boots and T-shirts in prints and patterns, and a growing array of satchels, totes and clutches.

Typically, there’s some subtle wit or design twist injected into the products, such as this season’s scarves printed with sheep, or tea cups. Madewell — like its sister brand J. Crew — keeps building relationships with outside brands, selling Herschel backpacks, Barbour field jackets and Chimala jeans from Japan, for example, to round out the assortment. There’s a look and an attitude, and a bit of gravitas to the collection, and a young spirit without being teeny bopper, or novelty juniors. There’s no overlap with J. Crew, which is more about total wardrobing and operating larger stores. Madewell stores average 3,500 square feet; J. Crew averages 6,000 square feet.

“We do capture this casual element but have definitely expanded with more elevated pieces,” said Kin Ying Lee, Madewell’s head designer. “It’s not like we have to box ourselves into designing for a certain price.”

Twenty-five to 35-year-old women is the sweet spot, though Madewell embraces a wider range extending from college-age women to women in their 40s and 50s.

When Drexler launched Madewell, the name wasn’t universally accepted, and sometimes people got it wrong, by saying “Wellmade.” But something about the name and its vintage character spoke to Drexler. “The name immediately resonated with me in a very positive way. For me, there was also a vision attached to the name.

“It’s a very personal exercise when you are naming a company,” Drexler said. “In a sense, it’s like naming your child.”

The Madewell story recalls what happened at Old Navy, which Drexler also started when he was ceo of Gap Inc. He took the Old Navy name off a bar on Rue St. Germain in Paris he happened to notice. The Gap board hated the name and hired two marketing companies to come up with alternatives, but Drexler won out. “No one will ever agree on a name,” Drexler said. “But the name really doesn’t mean much, until the business itself becomes meaningful.”

With Madewell turning a corner, Drexler said he’s pleased by the progress, though “not at the point of feeling very gratified. I feel optimistic where it’s going. I will feel gratified down the road when Madewell has more stores, more earnings and more happy customers.”

Which raises the question of what Madewell’s ultimate store count could be, which market sources believe probably won’t rival some other major youth chains such as Abercrombie, with more than 1,000 stores, or American Eagle, with more than 900. “I can’t answer that yet,” Drexler said. “Ask me in about a year.”