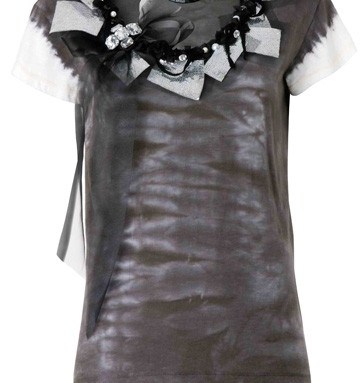 The latest collaboration for the Barcelona-based fast-fashion chain is with Moises de la Renta, whose collection of T-shirts decorated with jewels, precious stones, ribbons, chains, tulle and graphics of rope and horses brings a sense of luxury to the pedestrian garment. The collection, which bows on April 1, is called MDLR for Mango after the name of the designer’s own line, MDLR Moises de la Renta. Prices will range from $50 to $70.

The 25-year-old de la Renta explained the Mango deal came about because, “My father [Oscar de la Renta] asked me to go to Spain with him for Mango’s El Botón-Mango Fashion Awards. He was head of the judging panel.” At the event, the younger de la Renta met Mango founder and chairman Isak Andic and his son, Jonathan Andic. “I started talking about my T-shirts and the opportunity of doing a capsule collection,” he said. “When I got home, I mailed them some things.”

Mango liked de la Renta’s work enough to invite him back to Barcelona to meet with the design team. De la Renta presented two versions, one with a spare, androgynous style similar to the MDLR aesthetic, and the other with a more feminine, frilly look. Mango chose the second.

As his collaboration comes to fruition, de la Renta has been working on putting the finishing touches on e-commerce, which will launch on his Web site in May. “The retail industry is so bad right now,” he said. “Shopping is very much a luxury. People don’t have time to shop.” De la Renta, who sells his collection in two stores — Ikram in Chicago and Head Over Heels in Menlo Park, Calif. —predicted that he can do 50 to 60 percent of his business online.

While First Lady Michelle Obama wore his red sheath to a White House function last August, de la Renta’s collection is not widely known. “I have a small fan base or following and I want to establish that more,” he said.

His collection features 27 looks including dresses, skirts, cocktail dresses, masculine tailored jackets and pants, priced from $90 for a T-shirt to $2,500 for a jacket. “I always think of classic images and the glamorous side of New York. I guess I naturally get that from my dad.”

De la Renta plans to expand his handbag range, small leather goods and leather jackets. The next additions to his collection will be jewelry and fur.

De la Renta, who called the experience of working with Mango “awesome,” said he’d next like to design dresses and cocktail dresses for the fashion giant. “The project opened me up to get out of my comfort zone,” he said. “The design studio is in an airplane hangar outside Barcelona. It was like going to Disney World.”