The Maroon 5 frontman will join music stars like Justin Timberlake by launching a fashion line. 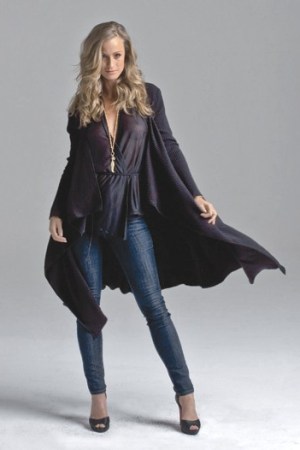 Maroon 5 front man Adam Levine is set to join the ranks of music stars like Justin Timberlake, Madonna, Diddy and Jay-Z by launching a fashion line.

Called 222, Levine’s first collection is launching at the Project trade show in Las Vegas this week.

“I’m passionate about fashion. I think it says something about yourself and, whether you care about clothes or not, what you wear reflects some kind of attitude towards style,” Levine told WWD.

Unlike his pop star peers, Levine’s foray into the rag trade is a homegrown operation. He is partnering in the venture with his father, Fred Levine, who has operated a chain of specialty boutiques in Los Angeles called M. Fredric for more than 30 years. Also part of the team is his longtime stylist, Aristotle Circa, and a cousin of his father’s, Sami Cooper, who owns an apparel manufacturing facility that will produce the line.

“This is a family affair,” said Levine. “What I wanted to avoid was the typical pitfalls that someone in my position can fall into. This is something grassroots. Most importantly, it’s something that I work on myself. I collaborate on and approve every single piece of clothing in the line. I’m not just hawking something because I’m in a famous band.”

The collection is a minimalistic line of jeans, basic T-shirts and leather jackets — Levine’s current uniform of choice and the classic look of icons from James Dean to Marlon Brando. For women, there are also pared-down silk dresses, knit tops and wraps.

“It’s very simple and pure and durable,” said Levine. “Jeans, T-shirts and a leather jacket. That’s all I need. I think it’s always fun to be the most underdressed person in a room. There will be no bedazzling in this collection. I like subtlety in design. These days so much stuff looks like someone vomited all over it.”

“There are no prints or embellishments in this line. It’s about the most comfortable fabrics and creating the most flattering silhouette possible,” said Fred Levine. “Shirts and blazers will come in time. We want to nail down what we’re best at first.”

Growing up in California with a father in the retail business did not automatically instill an interest in clothes to the younger Levine. “I always had a profound respect for my dad’s business and his success, but I was never interested in being a part of it,” recalled Levine. “I had tunnel vision for music. But more recently, I thought about combining our two talents and interests. It was kind of synergistic. It feels very natural. It’s a no-brainer.”

The style of the 222 line may surprise some who remember Levine’s days as an avid clotheshorse and consumer of luxury labels. Following the widespread success of Maroon 5’s debut album “Songs About Jane” in 2002, the rock star became known for performing in slick Yves Saint Laurent suits.

“I went through a very un-casual phase. My nose would be turned up and I would insist on wearing the best of the best,” said Levine. “I would go to dinner in ties and jackets and Balenciaga and stuff. I got caught up in the whole idea of fashion and the Margielas and Ann Demeulemeesters of the world. There’s a real art behind that — as pretentious as that sounds it isn’t, because there really is. It’s a beautiful, amazing world. But all that being said, it wasn’t really me. Before all this nonsense, I was touring in a van with jeans and a ripped T-shirt and a leather jacket if I could afford it — and that’s what got me through and to where I am today.”

Asked how that evolution from denim to Demeulemeester and back happened, Levine was frank. “You mean when did I turn into a label whore? I think when you sell 10 million albums and the money starts to come in, it does things to you that you either recover from or don’t,” he said. “The novelty of the money got me interested in designers and fashion. And as materialistic as that was, it was also a valuable learning process where I learned about fashion and the craft that goes into it. It’s like playing music — you have to learn everything and then you can underplay what you know, if you do it tastefully.”

As for the name 222, it’s long been Levine’s lucky number. “It was the address of the recording studio where our band first recorded our demo and I have it tattooed on my left forearm,” he said.

Levine plans to play a low-key role in marketing the launch of 222 — he won’t be at Project as he is on tour with Maroon 5 — but he’s fully aware that his celebrity will help garner attention and hopefully sales, for the line.

“I want the line to be successful on its own merit. I would love for it to be successful without my celebrity playing into it,” he said. “But it would be a waste not to use it, as gross as that sounds. But I just want to put it out there in a tasteful way. I wear it every day, and I’m wearing it during every show of my tour.”