Comic book company is making a super push into the women’s apparel, cosmetics and accessories markets. 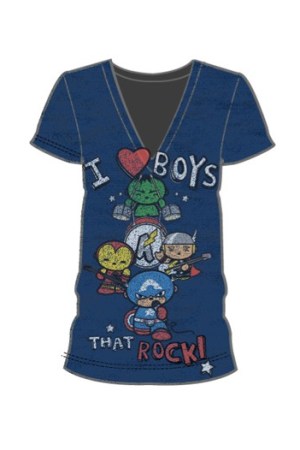 The consumer products team at Marvel is thinking big when it comes to females.

The entertainment company, best known for its library of comic book superheroes ranging from Spider-Man to Iron Man, is starting 2009 with a major push into the women’s apparel, cosmetics and accessories markets. This move comes after more than 70 years of gearing the bulk of its merchandise assortment to the young men’s market, selling everything from Spider-Man comic books to Captain America business card holders and Incredible Hulk T-shirts.

“Since our core customer has always been guys, we need to be very careful when we introduce female product so that we don’t alienate our core,” said Paul Gitter, president of consumer products, North America, for Marvel Entertainment Inc. “What we have found through testing is that we haven’t alienated them, which gives us the OK to move forward with female product.”

Since 2007, the $5.7 billion consumer products division at Marvel has been testing select items for females, such as graphic character T-shirts at Hot Topic and Gap, and jewelry at Claire’s, among other items at select mass and mid-tier retailers. What executives at the firm found while testing was that when it comes to females, relevance to trends is key. Simply relying on the character alone to sell themselves doesn’t fly.

“Hulk was a big component for us when it came to being eco-friendly, with T-shirts featuring the character and sayings like ‘go green.’ We also introduced a more stylized character graphic which looks like Japanese animation,” said Susan Fields, vice president of product merchandising at Marvel. “Also, anything that we can relate to current music trends does well. For instance, we have a T-shirt where all the superheroes were assembled into a band with a saying like, ‘I heart boys that rock.’”

With more than 5,000 characters available in the company’s archives — from superheroes and villains to friends and relatives of these heros and villains — Fields said the options are limitless. If a high-end department store wants to sell Spider-Man T-shirts and a specialty retailer is also interested, Marvel can adjust the images specifically for each retailer. This way, the merchandise can be tailored for all levels of retail distribution.

In 2009, Fields said the company plans to roll out a series of female-friendly products with a new range of licensing partners. Currently, stores are selling contemporary fashion tops licensed to Mighty Fine, junior fashion tops from Junk Food, mass fashion tops with Fortune Fashions and jewelry with H.E.R. Accessories. Starting with holiday, a larger array of items will be introduced, including handbags from Bioworld, stationary with iScream, color cosmetics with Lotta Luv, and watches and fashion jewelry with MZ Berger.

The plan, Gitter said, is to have a full Marvel lifestyle brand of products available before 2012. Marvel is negotiating deals for footwear, swimwear, outerwear, intimates and loungewear. Also, Fields said, the firm is looking for retail partners that can support the Marvel brand in a big way by merchandising it as a full lifestyle. In addition, Fields said they eventually hope to co-brand with a major designer. The result, Gitter said, will be substantial growth in sales, although he would not give specific projections.

“We are not recession proof, but I would like to think we are recession resistant,” he said. “I believe that if you can layer innovation and newness, even in tough economic times, you can have a highly saleable product.”