The elite U.S. forces of the CIA, SWAT teams, Coast Guard and firefighters are protected by flame-retardant, high-performance apparel created by the company. 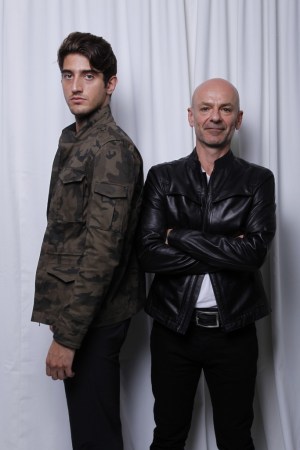 In fact, more than 3 million of Massif’s technical garments have been deployed in the U.S., Iraq, Afghanistan and other countries around the world, and the company’s annual sales are around $100 million.

For fall 2012, the Ashland, Ore.-based manufacturer is taking the expertise it has acquired on the front lines and translating it into a collection of men’s wear that combines technical fabrics and features with a contemporary fashion attitude. To achieve that goal, Massif hired Scott Branscum, whose background includes stints at Eddie Bauer, Perry Ellis and Cutter & Buck, to spearhead the brand.

“It’s high-tech fashion,” Branscum said. All the garments will have moisture management and antimicrobial properties as well as stretch and 3-D ergonomic shaping. Seams are naturally shaped to legs, underarms are fully gusseted to provide for range of motion, there are secure interior and exterior pockets and stealth sleeve pockets. Subtle badge epaulets are a signature of the line, which has been under development since November 2010.

“This is for the guy who stood in line to buy the first iPhone for $400 or spends $600 on a driver,” Branscum said. “He likes good stuff and wants performance.”

Massif was founded in 1999 by two entrepreneurs whose adventures included rock climbing and rescue missions. The company was acquired by Tactical Holdings and its private equity partner, Golden Gate Capital, in 2009.

“A soldier in Afghanistan needs to carry the specific tools of his trade,” said co-founder Jeff Roberts. “Ammo, grenades, maps, note pad, tactical light, combat knife, et cetera. He also needs to look professional and stay comfortable and effective in a wide range of temperatures and environments — on base, in cities and towns, in the desert, in a helicopter with the doors off. A businessman is very similar. He needs to carry the tools of his trade: money, credit cards, smartphone, keys, knife. He also needs to look appropriate and feel comfortable during a commute, at his desk, during meetings, on a flight, on a date and at home.”

Branscum said the Massif Collection will include a tailored softshell with a suggested retail price of $350 to $450; a five-button wool blazer for $350 to $450; tactical sweaters in merino wool and nylon for $150 to $250; yarn-dyed shirts for $120 to $180, and stretch wool mid-weight trousers for $120 to $180. There will also be moisture-wicking cashmeres, leather jackets with stretch gussets and a wool-faced dress puffy jacket.

In total, there will be 37 styles for the launch collection, including a single pant silhouette in four colors and fabrics, and one blazer in four fabric choices. The primary colors will be black, dark navy, charcoal, shades of gray, eggplant, dark military olive and dusty blue, he said.

The tagline for the collection will be “Clothing for Spies,” and it will make its debut at Project in Las Vegas in February.

Branscum said the target distribution for the line will be high-end department and specialty stores.