The Paris lingerie and swimwear event had a new layout and a bigger focus on beachwear. 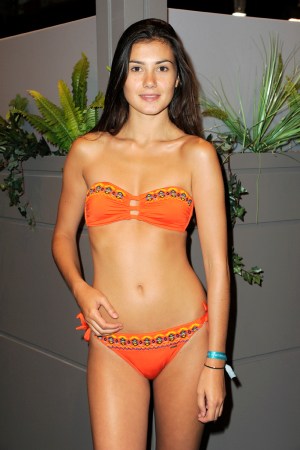 PARIS — Despite a new, more dynamic layout and a greater focus on the growing beach and activewear categories, visitor numbers took a tumble at this year’s Mode City trade show, which presented spring 2016 collections.

Mode City saw a 10 percent decline in visitor numbers to 14,000, with 72 percent from abroad. The decrease was tangible, with several major exhibitors saying that were it not for appointments with existing customers, things would have been quiet.

At sister fabrics show Interfilière, attendance was flat at 10,500. Sweltering temperatures on the first day of the shows, held at the Porte de Versailles convention center here from July 4-6, did not help matters.

In general, the new layout, which involved a bridge entrance with a view over the whole venue to give visitors a “360-degree experience,” as well as the product focus, was appreciated by visitors. The weekend’s festivities also involved a party on the quays of the Seine to celebrate Interfilière’s 30th anniversary and a swimwear show at the Piscine Molitor showcasing vintage and seasonal designs. “There is a real evolution in terms of swim- and beachwear, which corresponds with a strong market trend. That is really interesting for us,” said Le Bon Marché lingerie department director Laurence Dekowski.

“It’s a strong development axe today for lingerie, with swim- and beachwear as well as accessories to complete the offer.”

House of Fraser women’s branded accessories buyer Jenny Elisha said she was scouting new labels for next year thanks to strong summer sales. She had discovered Colombian brand Phax, showing a colorful Africa-themed collection. The 25-year-old brand counts El Corte Inglés, Falabella and John Lewis among its customers, and is looking to expand in the U.S., sales and marketing manager Mariana Vélez said.

Liz Steinfeld, owner of Liz Steinfeld Fine Lingerie boutique in Marblehead, outside Boston, was also pleased with the swimwear.

“It’s a great selection, there’s a lot of color, a lot of one-pieces,” she said, citing collections from Lise Charmel and Empreinte as well as young British brand Lilliput & Felix, which she discovered at the show, as standouts.

The high-end label, launched last December, was highlighted in an expanded, more central area for young designers. “It’s had a good reception, we’ve seen a lot of people,” said founder and director Catriona Ramsay, who focuses on textured fabrics and new shapes like a cross-back one-piece with a bow. Its retail prices for a swimsuit range from 200 pounds to 300 pounds, or $308 to $462 at current exchange.

Buyers who had come looking specifically for lingerie, however, were disappointed. Eve Noël, merchandise manager at Canadian chain Addition Elle, was one of those.

“There’s lots of swimwear and it’s a bit overwhelming. I would like to see more bras and panties. Lingerie is very important for us,” she said.

One buyer impressed by the focus on beach-to-active wear was Mandarin Oriental Las Vegas director of spa Jennifer Lynn, a first-time visitor as part of a dedicated luxury hotel spa program instigated by Eurovet. “The modern woman…wants the convenience and versatility of activewear and swimwear that can take her from one place to the next conveniently and fashionably,” she said.

“The accessories I discovered were part of this story too,” Lynn continued. “The scarves, wraps, cover-ups were great ways to layer over swimsuits and still feel comfortable moving from different settings, or day-to-night.”

Accessories were showcased at the event for the first time in a dedicated area. One such brand was U.S.-based GirlyGoGarter, launched only last year and already present in 1,600 stores in 12 countries. Its elastic lace garter with internal pockets for storing a phone, passport, lipstick and other essentials wholesales for $17.50. Company founder and TV style expert Andy Paige explained that she initially devised the product for carrying a mic on set around 10 years ago, and that it has since proved popular among celebrities on the red carpet. “We are looking for European distributors here,” said Paige.

Other new arrivals included U.S.-based Kea, whose founder Patricia Kwok is a keen surfer, and wanted to cater to a gap in the market for mature activewear styles.

“I felt like the audience had grown up and wanted something more urban and sophisticated, in more subdued colors,” she said. At the show, she had visits from Selfridges and Harvey Nichols, with buyers admiring her printed designs and one-pieces as well as crop tops made from Italian fabrics with wholesale prices ranging between $40 and $70.

Among trends, buyers also cited lots of color, especially blue and coral, Mexican and Aztec prints and details, as well as textured surfaces and embellishments like embroidery and beading. Reversible swimwear, mix-and-match designs and high-waist bikini briefs that offer coverage but can be rolled down to show a contrasting fabric and catch the sun’s rays were also key. Shopping at Interfilière, showcasing summer 2017 trends, high street retailer Next’s swim- and beachwear designer Helen Lake said she liked the array of texture and embellishment on display.