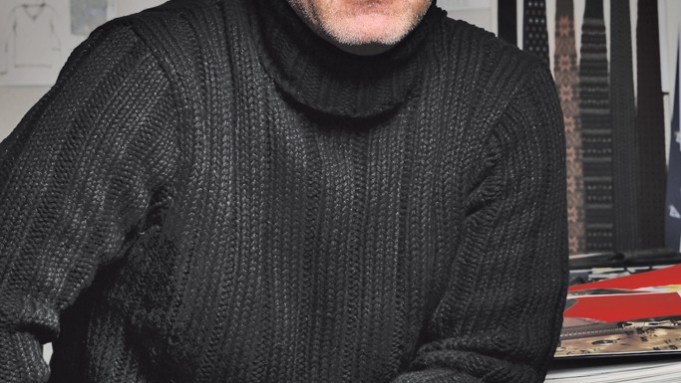 Chris Cox is passionate about the outdoors. And being Nautica’s vice president of design and creative allows him to indulge that passion every day.

Born and raised in New Jersey, Cox grew up around the water, summering at Long Beach Island, a barrier island off the state’s mainland.

“My brother was a lifeguard and in a band — I worked,” Cox said with a laugh. “But I lived vicariously through him.”

But it wasn’t all work and no play. When he wasn’t toiling away for some extra cash, Cox spent time enjoying the sand and the surf as well, skills he calls upon to create the company’s men’s collections every season.

“I have a really active life outside of the office,” said Cox, who enjoys surfing, kayaking, mountain biking, tennis and soccer, among other sports. “And this brand’s large point of differentiation is its performance aspects and the fact that it was built around the water.”

The company says its spinnaker logo is “a symbol of adventure, action and classicism.” This unwavering devotion to the water runs deep, and impacts everything Cox produces for the label.

He travels frequently to coastal locations around the country to keep his finger on the pulse of the Nautica customer. Those excursions have taken him from the Great Lakes to Oregon, New England to Florida and California, and while the communities and climates are different, there’s a certain commonality.

“I’ve seen a large diversity of people, cultures and lifestyles,” he said, “but water is what brings them all together.”

And while he keeps up with the latest fashion trends emerging from the runways of Europe, he finds his travels around the U.S. to be more useful inspirations for the Nautica brand because the company’s association with the water “is such a strong part of who we are.”

While his personal activities are a perfect match for the brand, it was his design talent that appealed to Karen Murray, president of VF’s Sportswear Coalition, which oversees Nautica.

Before joining Nautica five years ago, Cox spent 11 years at Tommy Hilfiger, overseeing everything from men’s outerwear, swimwear and bottoms to denim and sportswear. After leaving Hilfiger in 2004, he joined Victorinox as senior vice president of design and creative director.

“Karen went to HR and said she wanted to hire the guy who was designing Victorinox,” Cox related. “We had actually had a conversation when I left Tommy so she knew who I was and my career path. So I met with Karen and everything fell in line.”

He came on board as vice president of men’s design in February 2008, and later that year was elevated to his current position, succeeding Miriam Lambert.

“It’s been a fun run,” he said. “There have been a lot of challenges and a lot of rewarding moments.”
His primary goal upon joining the company was to reconnect Nautica with its roots and “get back to the core essence” of the brand.

“When I came in, we didn’t really stand for anything anymore,” he said. “We were all over the place and we were chasing something that wasn’t what the brand is all about.”

Cox dove in, researching the history of Nautica and where it had enjoyed the most success over the years.
“I did a ton of brand work,” he said. “I asked, Who do we want to be?”

Answering that question required “focus, belief and great creativity,” he continued. “You have to believe in who you are, put a stake in the ground and go for it.”

Cox said he’s never felt restricted by Nautica’s single-minded mission — in fact, just the opposite.
“When you put blinders on and really focus on the end goal, you can go forward — as long as it goes back to the brand’s point of view,” he said.

That point of view needs to be consistent across all categories of product that sport the Nautica name. As a result, Cox works with the company’s large cadre of licensees to ensure that they’re on board with the mission as well.

The design process starts with the company’s internal sportswear design team and then Cox “interfaces” with the outside companies that produce everything from tailored clothing, dress shirts and neckwear to shoes and cold-weather goods. The largest companies come to Nautica’s office on a quarterly basis to run through the color palette and print choices for the season to ensure everyone is on the same page.

But Nautica’s bread-and-butter is still its men’s collection sportswear, 95 percent of which is designed in-house.

As part of the mix, Cox will unveil the latest pieces of the Black Sail collection, which is the brand’s most elevated product.

“It’s more of our pinnacle line,” Cox explained. “It’s more directional and innovative. It’s our tease about where we believe we can take the brand.”

And this year, its 30th anniversary, Nautica is also offering a series of capsules throughout the year celebrating the milestone. For spring, Cox designed “more modern interpretations of vintage sailing pieces,” including waterproof sailing jackets, zip cable shawl cardigans with wind-block linings and full-zip hoodies. And for fall, the celebration will continue with similarly themed pieces.

“The America’s Cup finals will be in San Francisco in September,” Cox said, “so we’ll also be playing off of that.”

But in everything Cox designs, attention to detail remains paramount as Nautica seeks to capture “the essence of an active, adventurous and spirited lifestyle.”

Cox admitted: “I’m a gear-head. Growing up, I loved to see how things work.” He translates that into his designs for Nautica by constantly asking “what’s next, what’s warmer, what’s cooler, what’s drier? I’m driven by that — whether it’s in hard goods or soft goods.”

So which items does Cox believe have been his most iconic during his tenure at Nautica?

“I’m a giant turtleneck fan,” he said. “And this fall, we’ll be celebrating the fisherman’s sweater.”

In addition, he pointed to the down parkas with fur trim and “detailed bottoms with a great wash,” as key. “And pant fit is really important to me.”

Cox said the sportswear design team creates a collection every year that is “so vast, it’s hard to pick one thing. In any given quarter, there are 800 to 1,000 sku’s and we manage three seasons at once.”

He said such a work load would be impossible without the help of a strong technical and product-development team. And each of the company’s designers, some of whom have been with the brand since founder David Chu was still on board, is responsible for all the technical bells and whistles on each garment they create. “We don’t just design it and hand it off,” he said. “We control everything about it, including making sure it’s [priced] properly. Owning the details is very important — today’s consumer expects so much.”