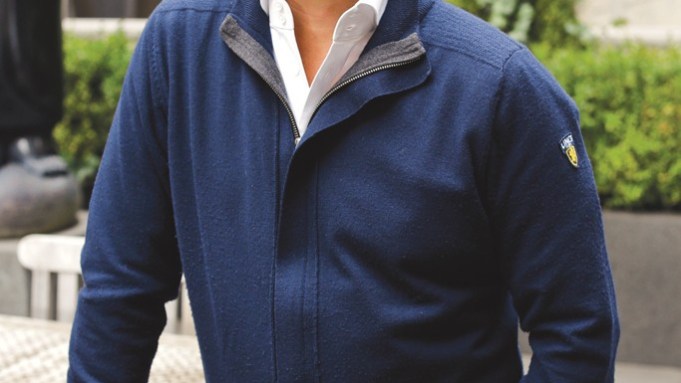 David Chu always had an affinity for the water. And it was this love of the ocean that prompted the designer and entrepreneur to create the Nautica label in 1983.

“I used to travel to the islands and loved being on the beach in St. Maarten and the Bahamas,” Chu said in a recent interview at his town house in New York’s Flatiron District. “I found the island life cool and relaxing and being around the ocean was magnificent.”

Even so, the idea of creating a nautical-themed apparel brand was the furthest thing from his mind growing up. In fact, Chu, who was born in Taiwan and immigrated to the U.S. at age 13, had designs on being an architect, not a designer.

“I went to FIT, but I didn’t know I’d be in the fashion industry,” he said. “I actually studied design by accident. I thought I’d be an architect or in sales and marketing. But I took an illustration class one summer and found myself in fashion design.”

After he graduated from college with a degree in fashion design, Chu traveled back to Taiwan and launched an apparel business with friends, “but it failed miserably,” he recalled with a laugh. “But I’m glad I failed early. It’s better to fail when you’re 23 and young and stupid than at 35 or 40.”

Chu returned to the States and joined Kayser-Roth for five years. Then, in 1983, his entrepreneurial spirit surfaced and Chu whipped up a small collection of six colorful men’s jackets that incorporated fashion and function. This collection spawned a new business that he named Nautica, after the Latin word “nauticus,” for “nautical.”

“I was 28 when I started Nautica,” said Chu, now 58. “It started with a sail-away jacket and was fine-tuned over the years. It resonated with a lot of people.” In its first year, he said, Bloomingdale’s, Barneys New York and Saks Fifth Avenue carried the collection along with such high-end specialty stores as Mark Shale, Roots and Capper & Capper.

“When we started, there were 80 department store chains,” Chu said wistfully. “Now there are four. And we were also selling to a few hundred really good specialty stores.”

The company had sales of $700,000 in its first year and $2.5 million the following year, the same year it caught the attention of State-O-Maine, a publicly traded sleepwear firm. In his bid to expand his fledging brand, Chu partnered with the larger company and with State-O-Maine’s Harvey Sanders serving as chief executive, a plan was put into motion that took Nautica into various product categories including sportswear, activewear and women’s wear as well as retail.

Nautica in-store shops were installed at department stores around the country and the brand sponsored sailing competitions and opened a fancy showroom on 57th Street in New York.

With the Nautica label accounting for the majority of State-O-Maine’s sales, the company was renamed Nautica Enterprises in 1994. At the height of its popularity, worldwide sales were more than $1 billion, and there were some 1,500 in-store shops around the country, as well as more than 100 of its own stores. The brand’s name was found on everything from neckwear to fragrance, and along with Tommy Hilfiger and Polo Ralph Lauren, Nautica rode the American sportswear wave that was sweeping the U.S. at that time.

In 2003, VF Corp. — which had been thwarted in its attempt to buy Calvin Klein — bought the brand for $600 million in cash. Chu pocketed a windfall of more than $104 million and stayed on with VF to oversee global design, product development and marketing for the label.

He remained for a little over a year “to transition the business,” he said, before exiting to search for his next chapter.

“VF’s strategy was an investment strategy,” he said. “And they didn’t think they needed any more of my input. So I moved on. Life is a series of different adventures.”

The first adventure was to create a new company, DC Design International, to market an upscale men’s designer collection label. At one point, he was designing both a tailored-driven David Chu line and a sportswear collection under the Lincs by David Chu name. The two lines were merged in 2008. He also has a David Chu Bespoke line of luxury made-to-measure men’s wear that he offers from the top floor of his historic brick town house in Manhattan.

Chu also flexed the creative side of his personality by buying an equity stake in Tumi, the luggage and accessories brand, and joining the company as executive creative director. He worked with Tumi for around two years and also acquired Mallory & Church, a luxury accessories firm.

Most recently, Chu teamed with Investcorp to acquire Georg Jensen, a Scandinavian luxury brand that is best known for its high-end silver but also manufactures jewelry, watches and high-end home goods. It was founded in 1904 and operates nearly 100 stores around the world but has limited distribution in the U.S.

Leafing through a coffee-table book of Jensen’s silver products, Chu, who was named the company’s chief creative director and cochairman of the board, said he was looking forward to doing “something that I’ve never done before. We can take this company global. Its penetration in North America and Asia is low. China is a potentially big market and we’re [enthusiastic] about the opportunities in North America.”

Among his goals for Jensen is to expand its men’s wear offerings. “We have a watch collection but we’re looking to launch men’s accessories,” he revealed.

He said he’s eager to “take my taste and sensibility and reposition the brand to be more successful. It’s an interesting challenge for me.”

Although he may be older and a little grayer, Chu’s creative mind-set hasn’t really changed since he conceived of Nautica three decades ago.

Looking back at the brand, Chu said he is “not surprised” that Nautica has remained so popular.

“Once you hit a certain size, you have longevity,” he said. “There’s a value and perception in consumers’ minds about what Nautica stands for, and that will be around for a long, long time.”

He admits that he doesn’t really keep up with what the brand is doing, although he said current Nautica designer Chris Cox “is a good guy and has good taste.”

But although he has distanced himself from Nautica, it will always be a big part of who he is. “Nautica was great and a lot of fun,” he said. “Life’s been good to me.”