Retailers zeroed in on jewelry and two-piece dressing for spring, as well as key fall items at Fashion Industry Gallery’s three-day market in Dallas. 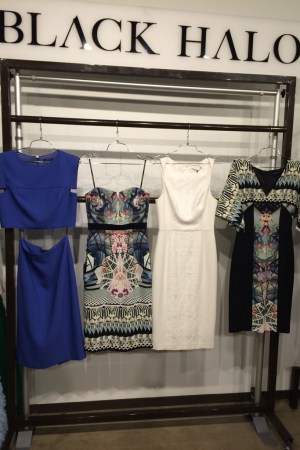 Many reported strong holiday sales, but held budgets even because last year’s spring and fall revenues were rocked by unseasonal weather.

The venue saw an uptick in resources and registration by merchants who hadn’t shopped FIG before, said Megan Bullard, FIG’s retail and marketing manager.

“We had a lot more exhibitors [in the Shop show] than we normally do for a January show, so that attracted buyers,” she said. “And we put out a mailer in December to try to attract new stores and that was highly effective.”

“I think the market looks good,” said Shannon Moore, buyer for the Shak contemporary boutique at Stanley Korshak in Dallas, citing A.L.C. as her favorite line at the show. Moore, whose budget was up, also favored Ulla Johnson’s strapless dress, pleated skirt and scalloped shorts and a fur poncho by Elizabeth & James.

“We do well with sexy two-piece things, as well as boho,” she said. “Everyone did a little top with fringe.”

Bridgette Hooper focused on jewelry and accessories for Bridgette’s in Tyler, Texas, picking up gold-plated monogram and nameplate necklaces by Jane Basch and layering pendant necklaces by Cheryl Dufault, along with Halston Heritage’s flared knit crop top and high-waist pants.

Clients at her high-end boutique want “buy-now, wear-now fashion, and it’s more casual, even with my older clientele,” Hooper said.

Hooper’s budget for the established store was flat, and she noted that she’s expanding her shopping center and adding a wine bar.

“I’m shopping closer than I used to and a little tighter,” said Johnston, owner of MaryBeth in Dallas. “I’m going a little more casual.”

Carolyn McGlennon, manager and buyer of the boutique at the Nasher Sculpture Center in Dallas, shopped for B. Stellar’s linear quartz and gold-filled wire earrings — one of her top sellers — Moss Mills’ leather clutches with gold shark-tooth hardware and streamlined fashion jewelry by Theia.

“Business is very good,” McGlennon said. “I try to look for stuff that is not typically at a museum store, things that are handmade, high quality and high style.”

“I’ve had our best four markets ever in a row,” said Briggs, citing Instagram as an effective marketing tool.
Kelsey Guy, sales manager for Agent Icon, was also pleased. It was the second show at FIG for the Los Angeles agency, which specializes in Australian resources including Asilio sportswear and Quay sunglasses.

“October was outstanding, and we’ve probably seen at least 50 or 60 stores at this show,” Guy said. “People are looking for lifestyle looks that aren’t casual basics. If they are spending, they want show-stopping pieces.”

Greg Mider, who has had a showroom in the building since it opened, said traffic was identical to last year and bookings for April, May and June deliveries ran up 3 percent.

“I didn’t have any fill-in business,” he said. “Anything new I sold. My knit business is really good and I sold contemporary silk like crazy.”

“We had better [Los Angeles] and Dallas markets in 2015, so those are positive signs,” Hasson said. “We’ll see how the year progresses. It still feels wobbly — it’s still a weird and strange landscape.”