Retailers were pleased with the edgy ready-to-wear and accessories featured at the exhibition. 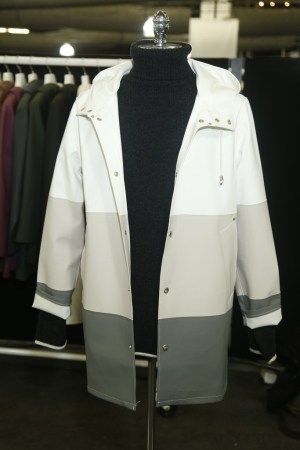 NEW YORK — Retailers were pleased with the edgy ready-to-wear and accessories featured at Capsule, which moved this season to Pier 94 from Basketball City here.

The three-day exhibition, which ended Tuesday, featured more than 200 ready-to-wear brands and 250 accessories brands (within Capsule Accessories). It also had a section called Beauty Lab focusing on beauty and skin-care brands.  With raw floors and exhibitor booths mostly comprised of clothing racks and a table, Capsule had the appearance of a no-frills warehouse.

Brooke Richman, founder and chief executive officer of Coop and Spree, a boutique on Elizabeth Street in New York, said she liked a few pieces from Potter and might write them for fall. In particular, she was excited about the slightly oversize gray turtleneck sweater hand-made in Brooklyn, which she called “supercozy and perfect for fall.” It had details such as cutouts by the shoulders and thumb holes. She also liked Potter’s cut-and-sewn pieces, such as the T-shirt and tanks, which she called “very edgy.”

Richman also liked several other brands, including Stone Cold Fox, made in downtown Los Angeles, and Flynn Skye, made mostly in L.A. “Both brands are not easily found or stocked in New York City,” said Richman. She said both brands had a similar aesthetic and vibe “which reflects the downtown L.A. girl — very chic, laid-back and bohemian inspired. The clothing is inherently feminine, but also reads as edgy and effortlessly cool,” she added.

She was also impressed by the accessory selection at Capsule, citing many new jewelry brands, especially ones that are locally made in Manhattan and Brooklyn. “The handbag line called Marylai was very strong, we’re going to pick up a few styles to test,” she said.

Richman found that one of the advantages of Capsule, versus some of the larger, more formal commercial shows around town, was “the ability to meet and interact with the designers and owners of the brands which are exhibiting. It’s a great way to learn about a brand’s ethos and history from people who are so integral to the brand’s existence,” she said.

Tetsuo Hashimoto, a New York agent for Big Apple, a store in Tokyo, was shopping Capsule in search of jewelry, jeans, bags and accessories. He said he liked the jeans at Skargorn, as well as the striped knits. He also liked the seashell jewelry at Chibi Jewels.

Jessica Sanderson, director of product at Seaside Luxe, had just arrived at Capsule in search of accessories and novelty items. She was buying for her stores in Hawaii and the Caribbean, which are located inside different resorts. “Our customers are more timeless than trendy,” she said.

Exhibitors appeared pleased with the pace of business at the show.

“The first day was very busy,” said Ben Hedlund, director of The Barbarian Agency, which repped several brands such as Triwa watches, Kaibosh sunglasses, Wood Wood, About Baltic Underwear and Stutterheim. “The day was the most buyers ever [at Capsule],” he said. Traffic slowed down on Monday when Coterie began at the Javits Center and seemed pretty steady on Tuesday, said Hedlund. He was seeing many buyers from independent boutiques, such as Old North Clothing in Asheville, N.C. and such Canadian accounts as Nouvelle Nouvelle and Leo Boutique in Calgary.

He was doing brisk business with About Baltic Underwear, which is an activewear line for women and men. The collection, known for its high-quality jersey, does a big reorder business and sells to such stores as Goose Barnacle in Brooklyn. “It’s good for stores that want a replenishment business and can turn it into $10,000 a month,” said Hedlund. Made in Lithuania, the line includes women’s and men’s underwear, wholesaling for $9, a women’s merino long-sleeve shirt, wholesaling for $26, and bodysuits for $26.
Stutterheim, which is based in Stockholm, sells to stores  such as Barneys New York, Dover Street Market, Goose Barnacle and Scoop. It includes Swedish fisherman’s raincoats, modernized and slimmed down. Offered in a variety of colors, the unlined version wholesales for $160 and the lined version is $244. The collection launched sweaters for fall.

Cleo B was selling shoes and shoe accessories at the show. The British-based company, established in 2010, was selling shoe clips, including pom-poms. “It’s been really good,” said Anna Birse, wholesale manager of Cleo B. “You put them on trainers, and they come in rabbit, faux fur and crystals,” she said. The shoe clips wholesale for $25 and come in pairs. At the show she saw such retailers as Harvey Nichols Dubai and Nasty Gal, as well as some major Japanese distributors.

Donna Potter, cofounder and creative director of Potter, said she was having a good show. She was doing well with her jackets. She was showing textural velvets, tattered silks, warm wool blends and chunky knit sweaters that are handmade in Brooklyn. “We’re seeing a lot of people come to check it out and setting up appointments for the next week,” said Potter.

Emily Collins, press and marketing coordinator for Lazy Oaf, said, “Business has been good. I have been affirming relationships we already have,” she said. Lazy Oaf has a nostalgic, cartoon influence. She said the line isn’t very active and includes “apathetic sportswear.”

“It’s a British brand and very sarcastic,” she said. One of the sweaters had the graphics “Lazy” across the chest.

Orla Kiely was showing at Capsule for the second season. Katelyn Dewan, brand coordinator, said “It’s been going really well for us. Retailers are taking notes and writing paper.” Orla Kiely launched its handbags 20 years ago and its rtw in 2011. Meghan McEwan, U.S. operations manager, found the size of Capsule to be appealing, compared with some of the bigger trade shows. “It’s a bit smaller and more manageable, and people can spend time with you and get to know your brand. It’s great space here,” she said.

Frasier Sterling, a jewelry firm, worked with Barneys New York and Free People on Monday, said Frasier Lipton, president and creative director. The handmade jewelry, which is easily layered, is all made in Los Angeles. Capsule was the first trade show the fashion jewelry company has participated in, having launched officially last November.

Wesley Clapp is a representative for Great Bag Co., which is a bag collection designed by Robert Verdi. The one-piece molded handbag fabricated from Fashion Flex with a soft luster wholesales for $60. Clapp said that Bloomingdale’s just picked it up. “It’s a really fun summer bag. It’s not only a beach bag, but a great ‘bad weather’ bag or yoga bag,” he said.

West 14th, which is based in Australia, sells to a handful of stores in the U.S. , a store in the U.K. and about 15 stores in Australia. Violeta Tentomas, director, said Capsule was about “finding new stores and being more accessible.” The line, which is sourced globally and manufactured in China, features soft black leather jackets, colored leather jackets, shearling coats and shearling vests. “I’m mostly meeting people. With leather, it’s a considered purchase. They have to think about it. For me, it’s starting the conversation.”