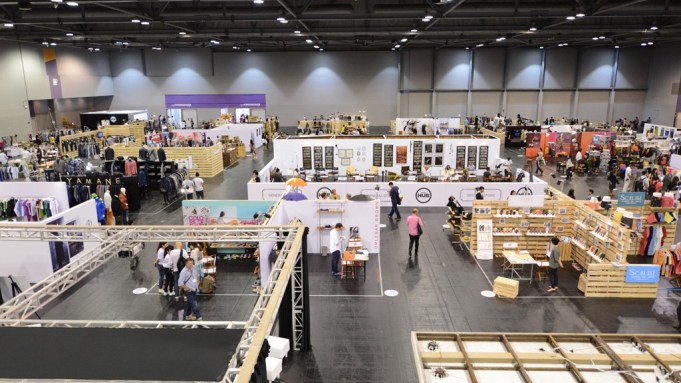 HONG KONG — The inaugural edition of The Hub trade show at AsiaWorld-Expo here last week provided Asian retailers with exposure to about 100 contemporary brands, mostly from Europe and the U.S., and tips for the exhibitors on navigating the escalating costs and operational complexity of launching brands in the region.

With a concentration of labels from outside the region and few from Asia, the show floor stood apart from other apparel fairs in the region. Exhibits had more of a focus on aesthetics and also created a smaller, more intimate environment. Many of the brands featured had little or no distribution in Asia and were hoping to gain a foothold.

Foot traffic at the event, which was held from Aug. 28 to 30, was light. Exhibitors said that, while attendees were fewer than expected, they generally were happy with the “quality” of buyers. Organizers said more than 3,000 Asian buyers and retailers were in attendance.

“Sales in Europe have been slow so we’re looking for growth in Asia,” said Gonzalo Iraolagoitia, sales manager at Laga, a Spanish women’s apparel line currently with distribution primarily in Europe with some in the U.S. and Japan.

The show, which is to be semiannual, was started by Richard Hobbs and Peter Caplowe, two British expatriates living in Hong Kong. The duo have been matching western brands with Asian distributors. Last year, Hobbs and Caplowe started Entrepot Asia, a consulting business to help fashion brands expand in China and Asia.

Even though growth in China has been slowing, “this event is evidence that international brands are not reconsidering their Asian expansion plans but are eager to learn more about the industry and how their brands can be part of it,” Hobbs said.

Many exhibitors said they were just testing the waters and learning about the market. For those with more experience in the region, the focus was more on how to expand the brand through standalone shops, multi-brand stores or some combination. Some companies, namely those with more experience in the Asia, discussed the importance of standalone shops to brand-building.

During a presentation, Kaspar Leschly, founder of D:Fuse shoes, a footwear company founded by Norwegian and Danish entrepreneurs that has expanded rapidly in China, emphasized that shop design was extremely important to how Chinese consumers perceive the brand.

“The shop is 50 to 60 percent of branding. Our DNA is evolving,” he said, acknowledging that the company is still working on shop design. D:Fuse has had five shop designs in seven years and has not unified the look of its various stores across the country.

Leschly and others discussed how retail marketing costs in China have been rising, nearing rates in Europe. Sam Chan, founder of Outsign Lab, a Hong Kong-based design, advertising and events planning company that works with many clients in mainland China, said it typically sees budgets of about 3000 to 4000 yuan a square meter, or about $45.50 to $60.66 a square foot, for a trendy, mass market brand. By comparison, typical marketing costs in Europe can range from 400 to 500 euros per square meter, or roughly $50 to $61.40 a square foot.

While marketing costs have always been important to upscale and premium brands, marketing has become increasingly crucial to mass market brands in today’s China as well. Part of the reason behind this, Chan said, may be the growing importance of digital technology.

“Five to 10 years ago, people always thought that marketing is not accountable but nowadays there’s a lot of digital media and it’s countable,” said Chan, noting that even for brands that have traditionally spent a lot on marketing, the spending is increasingly skewed toward digital and social media.

D:Fuse’s Leschly also discussed the challenges of running operations in a large market such as China as well as the importance of volume.

Negotiating with department stores is difficult and brands need leverage, he said, adding that it helps to go in with multiple brands. Also be prepared to deal in volume, he advised.

“In China, because of the department store format, you need to have a full shop. You cannot go in there with 50 SKUs. Generally we needed to have 200 SKUs. The minimum order size was 250 pairs [SKU] because otherwise the factories [in China] won’t work with you. That’s 50,000 pairs of shoes,” he explained.

Some brands with more experience in the region showed off their specialized lines catering to Asian consumers. Barbour, an old British brand best known for its waxed cotton outerwear, developed a line of lighter weight jackets for Asia and expanded the color palette from the usual khaki and browns to include brighter colors such as royal blue. The cut and sizing of the clothing was also adjusted slightly.

Among the other brands represented were Henri Lloyd, Barbour, Y-3 Yohji Yamamoto, Smyth & Gibson, Private White V.C., Joanna Ho, TKees and Sunspel. The emphasis was on quality and exclusivity with much of the merchandise handmade.