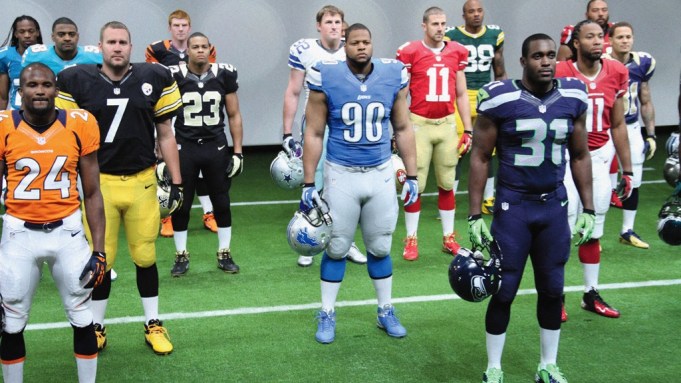 Players from each of the 32 franchise teams — including stars like Victor Cruz of the New York Giants and Ben Roethlisberger of the Pittsburgh Steelers — modeled the new designs for an army of television, print and online press, in a tightly orchestrated rollout at the Brooklyn Navy Yard.

“Today is opening day of a new era of potential. Today we kick off our partnership with the NFL,” said Mark Parker, chief executive officer of Nike Inc. “Today we begin to deliver product innovation in a way the game has never seen.

“Football is a sport that demands excellence from its athletes, and no company is more able to serve more than 1,600 athletes across the league and inspire millions of fans around the world than Nike. The NFL is a league like no other and together we will drive growth across our business and create momentum in the marketplace,” he added.

Nike inked a five-year pact to provide the NFL with on-field, base-layer, sideline and practicewear back in 2010, but the deal officially went into effect this past Sunday. The agreement replaces one with archrival Reebok, a unit of Adidas Group, which had been in place since 2002.

Consumers can preorder the new jersey designs, including women’s styles, on April 15 at nikestore.com, nflshop.com and on individual team Web sites. Team store retail locations and Nike stores will have the jerseys on sale on April 26. Broader retail stores will have them available April 27.

There are three levels of pricing and quality to the jerseys consumers can buy. The Nike Elite 51 jersey is an exact replica of the model worn by players, except for sizing that is designed to be worn without shoulder pads; the Limited style is a modified version with genuine touches like sewn-in embellishments and the NFL shield, and the game jersey is the most accessible and broadly distributed to fans.

The players’ jerseys incorporate a host of new technologies, with varying degrees of changes to each team’s design schemes. Many of the teams have little discernible changes to the overall look of the uniforms, with a few making key alterations. The Chicago Bears, for example, chose to highlight its historic “GSH” stripe.

The Seattle Seahawks uniform received the biggest makeover. The new look is inspired by both the historic Native American culture of the Pacific Northwest and the colors of the Seattle environment. “We celebrate the story within the uniform,” explained Todd Van Horne, creative director of Nike football and baseball. “The team’s logo is a striking sea hawk that provides a focal point for both the uniform and the helmet. The design on the helmet has a new wing pattern and the horizontal graphic across the front of the shoulders replicates the powerful wings carved into native thunderbird totems.”

The wing pattern is also used on the side of the pant, with 12 wing icons representing the team’s fans, aka the “12th man.”

“The arms have a nice fit and range of motion. You can get your hands up, catch the ball, reach for passes and reach out to make the big tackle,” said Kam Chancellor, a defensive back on the Seahawks. Of the pants, he noted, “The shrink-wrap fit down low — you can move your body around and it makes the jersey look good.”

Shonn Greene, a running back for the New York Jets, was slightly envious of the Seahawks’ high-style makeover. “The Seahawks one I’d say is the best uniform. They got a good look for them,” he admitted, although he added that his own Jets uniform was “a classy, old-school look.”

Asked about new teammate Tim Tebow, Greene said he was glad to have him on board. “I hope he can help our team win some football games,” he noted. “I think [Mark] Sanchez will be all right. He’ll still work hard. He’s our starting quarterback.”

The look of each team’s uniform was altered to varying degrees, due to NFL regulations. “They have structure of who can change and how often you can change the design of a uniform. And they allow it once every five years,” explained Van Horne, adding that Nike worked with each team on each uniform. “It’s a collaborative effort. They talk about their values and we’ll bring back ideas and solutions, and they respond to those and it’s very much a back and forth to get to a solution.”

Nike incorporated a number of technical innovations to the uniforms, using data from the Nike Sports Research Lab and leveraging body mapping, motion capture, thermal regulation and sweat mapping technologies. The uniforms are an integrated system where the base layer, padding, jersey and pants work in concert.

The base layer includes lightweight padding integrated directly into crucial “hit zones” on the garments. Nike’s Flywire technology is used around the neckline of jerseys to provide a “lockdown” fit over the shoulder pads, making it more difficult for opposing players to grab onto the jersey. The jerseys also boast improved sleeve articulation to provide better range of motion.

Even the players’ numbers on the backs of jerseys are fashioned from stretch twill for better fit, while the D-rings on the belt of the pant are manufactured from lightweight aircraft-grade aluminum.

“The pant is the biggest difference. It’s gone from a traditional knit material which absorbs a lot of water to a lightweight stretch woven with hydrophobic qualities, so its not absorbing the sweat like a traditional knit would,” said Van Horne.

“Nike has taken it to a whole different level and I’m excited to get it going in the first game. Loved the way they put it together, and loved the way they have the girdle and the thigh pads and the hip pads all in one. The gloves are awesome,” said Jermichael Finley, a tight end for the Green Bay Packers. “The saying is you look good, you play good. That’s the thing right now and Nike has done it.”

The Nike apparel deal greatly expands on a relationship the sportswear giant has had with the NFL for several years that allowed it to supply players with Nike gloves and shoes with the Swoosh logo visible on camera. Nike has also been allowed to feature individual NFL players in team uniforms in its advertising.

In the Nineties, Nike had individual sponsorship deals with teams, but never all 32 teams as it does now.

Kris Aman, global vice president and general manager of football, baseball and men’s athletic training at Nike, said the process of winning the NFL license has taken more than four years, with Nike participating in a competitive process to seal the deal.

“They ran a process that had a pretty defined protocol of how different companies would have the opportunity to show what they could bring to the table and in essence bid for what they could do for the NFL,” said Aman. “We spent all our time showing we are the world’s most innovative sport brand, we have the largest retail footprint and the most amazing design resources to bring the best to the table — not just for the athletes on game day, but for athletes when they train and for the fans.”

Other NFL apparel licensees include Under Armour Inc., which sponsors the NFL Scouting Combine; G-III Apparel Group Ltd. for outerwear; VF Corp. for T-shirts and fleece; Outer Stuff Ltd. for youth apparel, and New Era and ’47 Brand for headwear.

Earlier this week, a massive NFL pop-up store opened on the corner of Sixth Avenue and 42nd Street selling merchandise from those license partners.

“What I needed from the uniform was just making sure I’m comfortable,” said Cruz, wide receiver for the Super Bowl champion Giants. “As long as I can’t get pulled or tugged while I’m running, I think that’s the best part and I think these Nike jerseys have done that. I love them.”