To support the launch of Nine West's Vintage America line, the brand is staging a musical talent search. 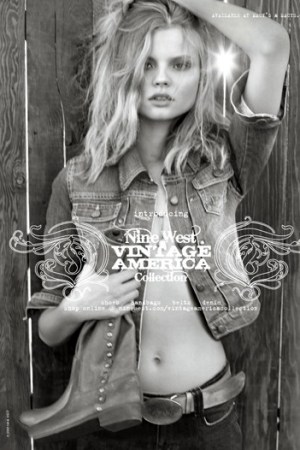 Nine West is looking for its very own “American Idol.”

Next month, the division of Jones Apparel Group Inc. is introducing the Nine West Vintage America Collection, and to support the launch, the brand is staging an online talent search.

The new label, which will be merchandised and marketed separately from the core Nine West brand, is inspired by an authentic, all-American aesthetic. It features looks with a casual, worn-in feel, from plaid shirts and cropped sweaters to distressed jeans and cowboy boots.

“It was important to me to offer the Nine West customer a more casual option,” said Fred Allard, Nine West’s creative director. “I love the idea of going back to what we love from American fashion — your favorite jean, rich leathers, relaxed boots.”

The line will launch at Nine West stores, ninewest.com and better department stores such as Macy’s in time for back-to-school.

“From a lifestyle perspective, we watch the influences coming out of the West Coast,” said Stacy Lastrina, Jones Apparel’s executive vice president of marketing. “We watch this casual, denim-friendly look.…All the things that are worn and loved and nurtured over time are becoming favorite pieces in women’s wardrobes. We believe that Nine West has an opportunity to be in this business.”

Lastrina declined to give sales projections, but said: “We do see it as a growth vehicle, but growth in this time is very hard to pinpoint.”

Nine West is asking people to submit an original song and video at YouTube.com/ninewestfashion. Weekly winners will be crowned through Sept. 1, and a panel of judges will select seven finalists and a winner, who will be announced at ninewest.com/vintageamericacollection. The panel includes Richards; Allard; Lucky magazine’s merchandising director, Rebecca Babcock, and Danny Strick, co-president of Sony/ATV Music Publishing. The winner will be given the chance to record and release a single through Hickory Records, a division of Sony/ATV Music Publishing.

“The concept of social media and video marketing is an opportunity to engage these consumers in a much more personal way,” Lastrina said. “We think the concept of listening to what our consumers have to say, and how they want to express themselves, will make us smarter about what we do, and how we stay relevant to them.”

To support the launch, Nine West also is planning a micro-site, sweepstakes, events and a Facebook page. In addition, it’s teaming up with the charitable Soles4Souls organization and is planning special shoe drives in its stores.